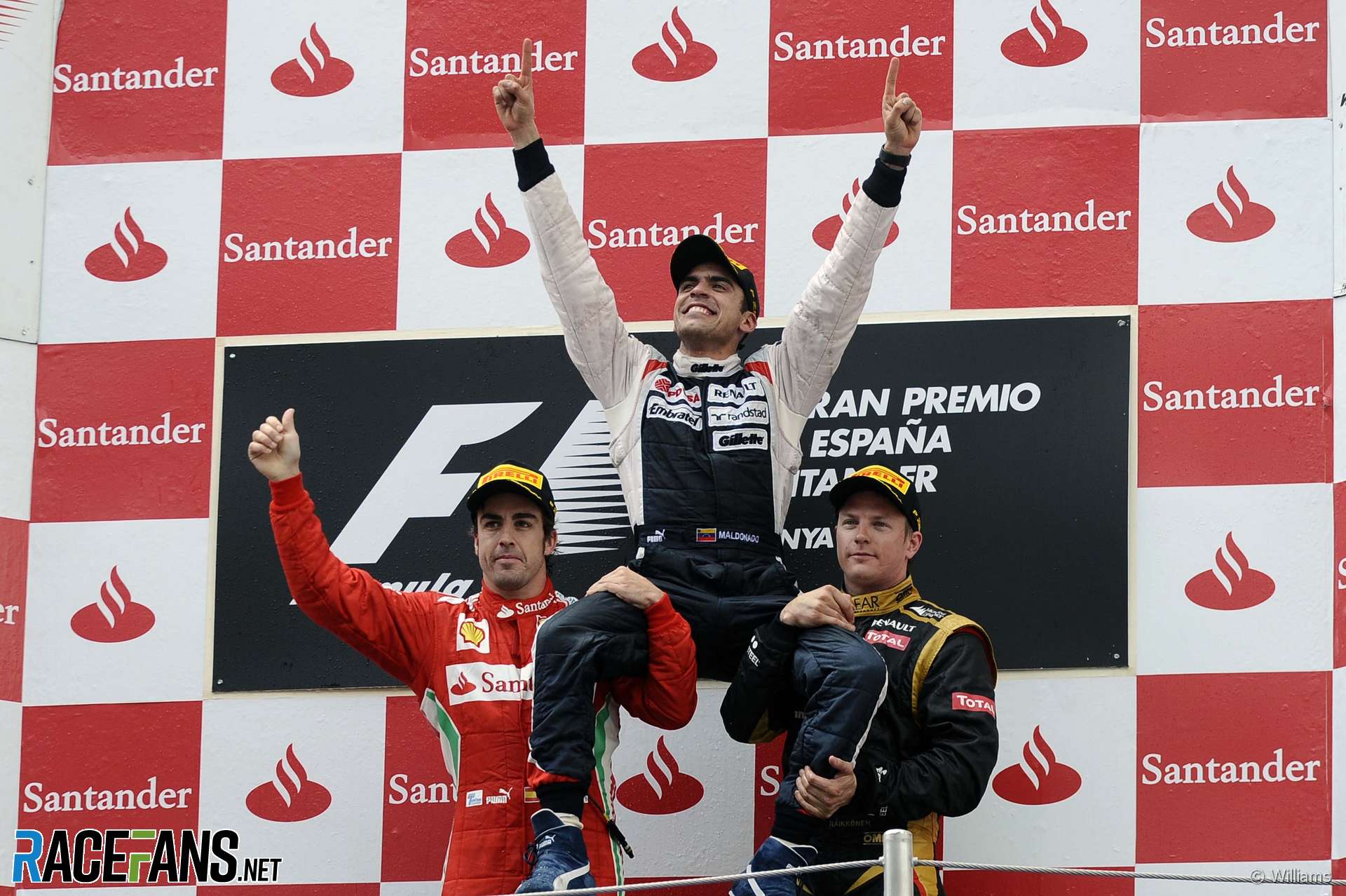 Pastor Maldonado signed for Williams in 2011 after winning the GP2 championship the previous year.

Maldonado started karting at the age of seven and soon began racing in national competitions. In 1999, aged 14, he moved to Europe to further his racing career.

He continued karting in European series until 2002 while also making his first steps in car racing. He contested various Formula Renault championships, culminating in victory in the Italian championship in 2004, with eight wins.

That earned him his first F1 test for Minardi at Misano at the end of 2004. The following year he joined Renault’s Driver Development Programme and raced in the World Series by Renault.

However he was banned for nine races after he ran into a marshal during practice at Monaco. The marshal was attending to another driver who had spun when Maldonado arrived on the scene and hit them both. The marshal suffered a broken back.

Maldonado returned to the series the following year and finished third in the championship for Draco. He moved into GP2 with Trident in 2007 and won the Monaco round.

A switch to Piquet Sports in 2008 saw him finish fifth in the championship. In 2009 he joined top team ART along with rookie Nico Hulkenberg. Although he won twice, including the Monaco sprint race, he ended the year sixth while Hulkenberg won the title.

Maldonado stayed in GP2 for 2010 and returned to Piquet’s team, now renamed Rapax. He put his three years’ experience to good use and set a new record for the series with six consecutive feature race wins.

That secured the title and handed him testing opportunities with Williams and HRT at the end of the year. Following the test Williams signed him to take Hulkenberg’s place in 2011.

Driving one of the least competitive cars Williams has ever produced, Maldonado managed to score a single point in his first season. There might have been more at Monaco but for a late tangle with Lewis Hamilton which left him in the barriers.

He compared well against experienced team mate Rubens Barrichello, especially in qualifying, and earned a contract extension for 2012.

Maldonado’s second season got off to a disappointing start when he crashed out of sixth place on the final lap of the Australian Grand Prix while trying to pass Fernando Alonso. But the revised, Renault-engined car had already shown more potential than its predecessor.

Four races later in Spain the pair shared the front row of the grid, Maldonado having inherited pole position from a penalised Hamilton. Alonso beat him to the first corner, but Maldonado jumped ahead through the pit stops and withstood fierce pressure from the Ferrari driver to clinch his first victory.

Following his breakthrough win nine races passed before he appeared in the points. A string of collisions led to several penalties, including three in one weekend in Belgium.

After that Maldonado made an effort to clean up his driving and produced strong performances in Singapore (before his car broke down) and Abu Dhabi (where he slipped to fifth after a KERS failure). He ended the year with another crash in Brazil, but the team subsequently announced he would remain with them in 2013.

Maldonado had high hopes for the team’s 2013 car after sampling it in testing, but the team slumped badly once the season began. Rarely in contention for points, Maldonado took just one, in Hungary, after the late retirement of several rivals in front of him.

Making matters worse, the team suffered problems with its wheel nuts late in the season, two of which failed on Maldonado’s car during practice sessions. They were forced to slow down their pit stops for safety reasons, further harming their competitiveness.

Maldonado grew frustrated with the situation and elected to end his contract with the team, taking his PDVSA backing to Lotus in 2014.

Maldonado’s move was unfortunately timed. While Williams’ switch to Mercedes saw them enjoy their best season in over a decade, Lotus struggled dreadfully with Renault’s uncompetitive power unit.

This was frustrating for Maldonado’s whose efforts were repeatedly derailed by a series of car problems. He aggravated the situation with some needless mistakes, however, including a collision with Esteban Gutierrez at Bahrain which flipped the Sauber driver onto his roll hoop.

The only bright moment in an otherwise gloomy year came at the Circuit of the Americas, where Maldonado took his sole points finish of the season.

For Maldonado’s second season at Lotus the team had secured a supply of the class-leading Mercedes power units. This, combined with a more conventional and effective design in the E23, made the team regular points contenders once again.

However Lotus was also facing financial difficulties, and spent much of the season waiting to see if a promised buyout by Renault would come to pass. It eventually did, though not until after the end of a season in which the team’s lack of funds had been painfully and embarrassingly apparent.

In trying circumstances Maldonado was thoroughly eclipsed by team mate Romain Grosjean, who out-qualified him 17-2 over the course of the season and achieved the team’s only podium finish of the year.

As in 2012, Maldonado collected more penalties than any other driver over the course of the year. His season wasn’t a complete waste – he achieved six points finishes including four races at the end of the year when the team’s circumstances were most trying – but as the year ended it seemed once again that his financial backing was the greater part of the reason why he had been retained.