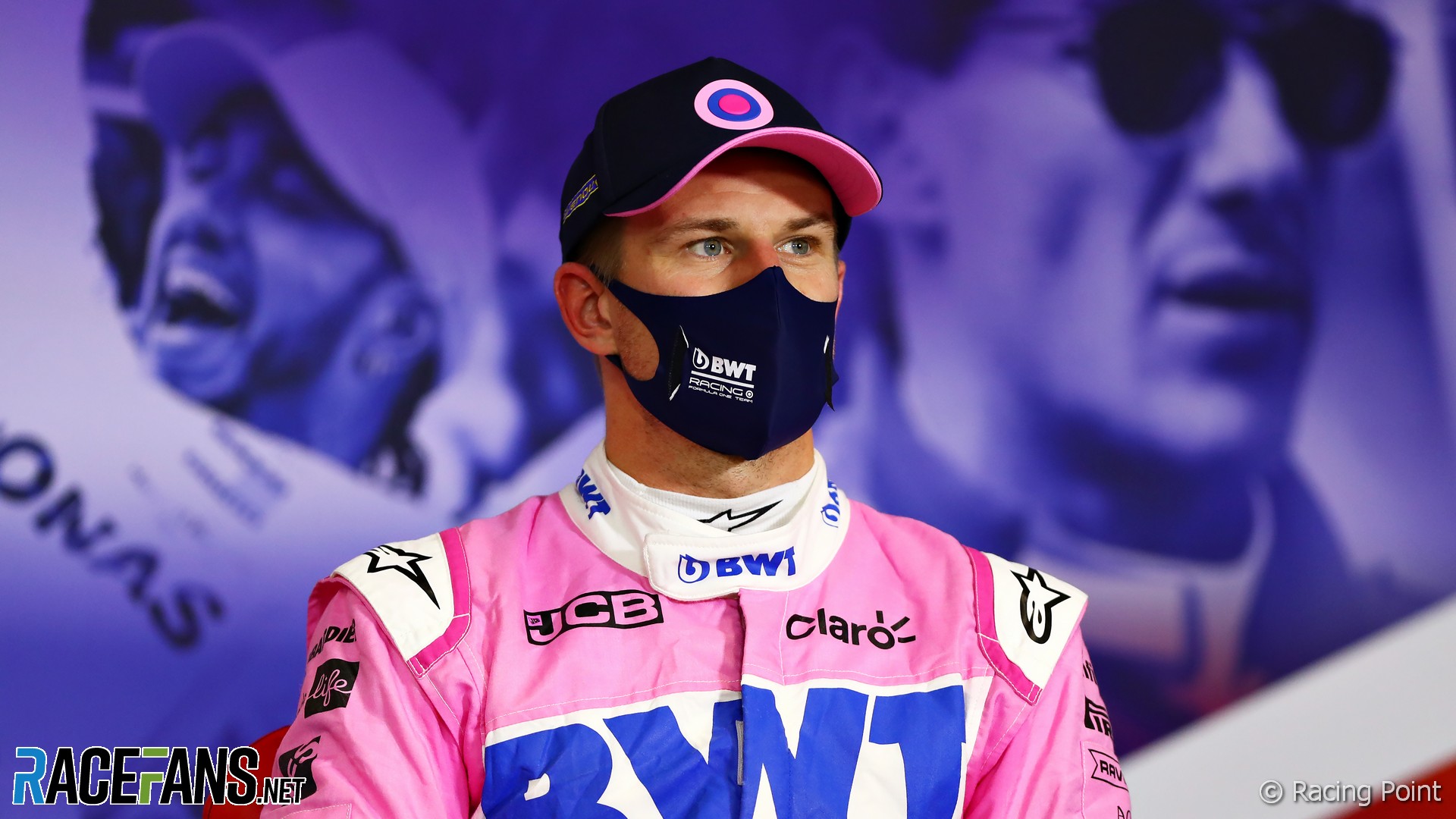 Nico Hulkenberg’s ascent through the ranks of junior motorsport began on the German karting scene.

It was a successful move – he won the German Formula BMW championship at the first time of asking in 2005. But after finishing first in the Formula BMW world final he was demoted to third after the stewards decided he had brake-tested other drivers during a safety car period.

Formula Three followed but Hulkenberg entered the German series in 2006 rather than the more prestigious European championship. He ended the year fifth, winning once at the Hockenheimring, but not scoring any further wins after a mid-season switch from the Dallara to the new Ligier chassis.

Hulkenberg enjoyed a successful winter campaign in the second A1 Grand Prix championship in 2006-07. He started all but two races for the German team, and the outfit that finished 15th in the previous season became champions thanks to Hulkenberg’s nine victories.

He returned to Formula Three for 2007, stepping up to the Euroseries with champions ASM. It was a year of inspiration and exasperation in equal measure.

He was second in the season opener at Hockenheim, sensationally won at the Norisring from 18th on the grid and added another fine win in the wet at Zandvoort.

But he crashed out of the first Norisring race, was penalised at Magny-Cours for passing the chequered flag twice in qualifying and collided with Filip Salaquarda in the race.

A strong end to the season saw him end the year third overall behind Romain Grosjean and Sebastien Buemi, with four wins.

In 2008 he returned to the F3 Euroseries while also joining Williams as a test driver. Hulkenberg won the title this time, and moved up to GP2 with his ART team.

At the start of 2009 Hulkenberg was the first driver to test Williams’ new FW30. He also impressed during the off-season with two appearances in GP2 Asia double-headers, setting pole position in both qualifying sessions and winning at Qatar in only his third start – stretching out a huge 45-second lead at one point.

He moved up to the GP2 main series with ART and after taking a few races to settle in he reeled off three wins in a row and rapidly ascended the championship order. He was already ahead of Grosjean in the championship when his closest rival graduated to F1 with Renault. By the end of the season Hulkenberg had become the first rookie to win the championship since Lewis Hamilton, with 100 points to Vitaly Petrov’s 75.

Williams promoted him to their race team for 2010. Hulkenberg’s maiden season went well, and in the second half of the year he was often in the hunt for points.

But his pole position at Interlagos in a damp qualifying session came as a complete shock. Hulkenberg produced two laps quicker than the best effort of the next-fastest qualifier.

Despite having put a Williams on the front of the grid for the first time in five years, it wasn’t enough for Hulkenberg to keep his place at the team. He was in favour of Pastor Maldonado, Hulkenberg’s successor as GP2 champion.

Hulkenberg moved to Force India as the team’s reserve driver, participating in most of the Friday morning practice sessions.

At the end of the year the team confirmed he would race for them in 2012.

Hulkenberg made steady progress after returning to a race seat in 2012.

His season culminated in another bravura performance at Interlagos, where he led for 30 laps in the same kind of mixed conditions he had excelled in two years earlier. He eventually lost the lead and spun into Lewis Hamilton.

This fifth place capped a strong end to the season which included fourth place in Belgium and stand-out drives in India and Korea. Even before his excellent performance in Brazil he had been signed up by Sauber for 2013. But an better opportunity had passed him by: Years later Ross Brawn confirmed he had been Mercedes’ second choice for the seat which went to Hamilton. And the Sauber move quickly proved a mis-step.

However Hulkenberg’s move to Sauber proved a disappointment and before the end of the year he had announced a return to Force India in 2014.

The first half of the year was especially poor as the team’s latest chassis proved uncompetitive and prone to destroying its rear tyres. Hulkenberg’s efforts were further frustrated by technical problems – he failed to even start the first race of the year – and errors in the pits.

Matters improved when the team introduced a refined aerodynamics package and the mid-season alterations to the tyres also aided their cause. Hulkenberg qualified a remarkable third in Italy, with just the Red Bulls in front of him, and finished fifth.

He went one better in Korea, holding off Hamilton and Fernando Alonso for fourth place. But despite these giant-killing feats he was passed over by the likes of Ferrari, McLaren and Lotus who filled their vacancies with other drivers. Hulkenberg opted to return to Force India for the following season. This proved a well-timed move: Sauber endured a dismal 2014 campaign, while Force India enjoyed the benefit of Mercedes’ class-leading power unit.

Hulkenberg regularly brought the car home in the points, but even so there was still no podium for him. New team mate Sergio Perez made the team’s only appearance on the rostrum, passing Hulkenberg on his way in Bahrain.

However it was Hulkenberg who took the lion’s share of the team’s points, and took his best position in the championship so far with ninth.

Hulkenberg made history in 2015 by becoming the first active Formula One driver to claim victory in the Le Mans 24 hours in 24 years. He shared the win in a Porsche 919 with Earl Bamber and Nick Tandy, the trio also racing together in the Six Hours of Spa as a warm-up.

The Force India driver’s results in F1 gave the lie to the claim that grand prix racers risk impairing their performance by racing elsewhere: on his return to the championship in Austria he took his best result of the season with sixth.

It was a season of two parts for Force India, who introduced a major upgrade for their VJM08 chassis at mid-season which transformed its competitiveness. However for Hulkenberg this coincided with a patchy spell where problems of his own making as well as trouble with the car limits his points-scoring.

A technical problem kept him from racing at all at Spa, but in Singapore he was to blame in a collision with Felipe Massa. He also carried the can for his lap one elimination in Russia, but in the USA the car failed him again.

When he saw the chequered flag over the final dozen races it was invariably in sixth or seventh place – but he failed to do so five times while his team mate managed a trio of fifths and a podium in Sochi.

A clash of calendars meant no Le Mans return for Hulkenberg in 2016. And some poor luck meant the F1 podium continued to elude him.

Monaco was a particularly bitter result. Hulkenberg was the team’s leading driver in the early stages but a poorly-timed pit stop dropped him behind Massa, who was running long, and Perez reached the podium instead. Two races later in Azerbaijan another chance passed him by, but this time a spin in qualifying meant the opportunity was squandered.

He scored strongly over the balanced of the campaign in the ever-improving VJM09, though not quite as well as Perez. But when the opportunity of a move to a manufacturer team presented itself Hulkenberg jumped – even though it was with Renault, who’d made an uncompetitive return to the sport that year.

Having ended the previous season ninth with an under-developed car, Renault rose to sixth in 2017. Hulkenberg contributed by far the majority of the team’s 57, scoring 43. Towards the end of the season his original team mate Jolyon Palmer was replaced by Carlos Sainz Jnr.

Renault’s long-term plans to rebuild its team were still in their infancy, but Hulkenberg had made a promising start at his new team. He appeared regularly in Q3 and scored a trio of sixth-place finishes, though a better result was on the cards at Baku until he crashed. It was arguably another potential podium chance missed, and later in the season he surpassed Sutil’s record for having the longest career without a top three finish.

Renault’s upward progress continued in Hulkenberg’s second season at the team. A seventh and two sixths for him in the opening races indicated they had arrived as ‘best of the rest’ outside of F1’s three big teams. As the season progressed, however, Hulkenberg found himself increasingly under pressure from team mate Sainz.

At the end of the year Hulkenberg held the upper hand on points, 69 to 53. But the arrival of Daniel Ricciardo in Sainz’s place the following year promised a sterner test for Hulkenberg, whose season ended with a heavy crash at Yas Marina.

In a difficult season, Renault’s progressed stalled and Hulkenberg found himself up against a challenging new team mate in the shape of Ricciardo. The pair had a tough fight on their hands against the McLaren drivers, and Ricciardo more regularly took the better results.

Hulkenberg’s nadir came at home in Germany, where that elusive podium was on the cards once again. However the run-off area at the final corner was treacherously slippery in the wet conditions, and when he touched it there was no keeping his car out of the barriers. The following month Renault confirmed it would drop Hulkenberg to make way for Esteban Ocon, who had originally been under consideration for Ricciardo’s seat.

Despite failing to land a full-time drive for 2020, Hulkenberg returned to F1 sooner than expected. Amid the disruption caused by the Covid-19 pandemic, Racing Point (previously known as Force India, his former team) found themselves in need of a substitute for Perez, who tested positive for the virus. Hulkenberg was drafted in for two races, both at Silverstone.

With characteristic ill luck, he failed to start the first when a bolt sheared inside his power unit and jammed it. However he returned successfully at the following, qualifying third with only the all-conquering Mercedes pair ahead of him. He finished the race in seventh following an extra pit stop due to a blistered tyre.