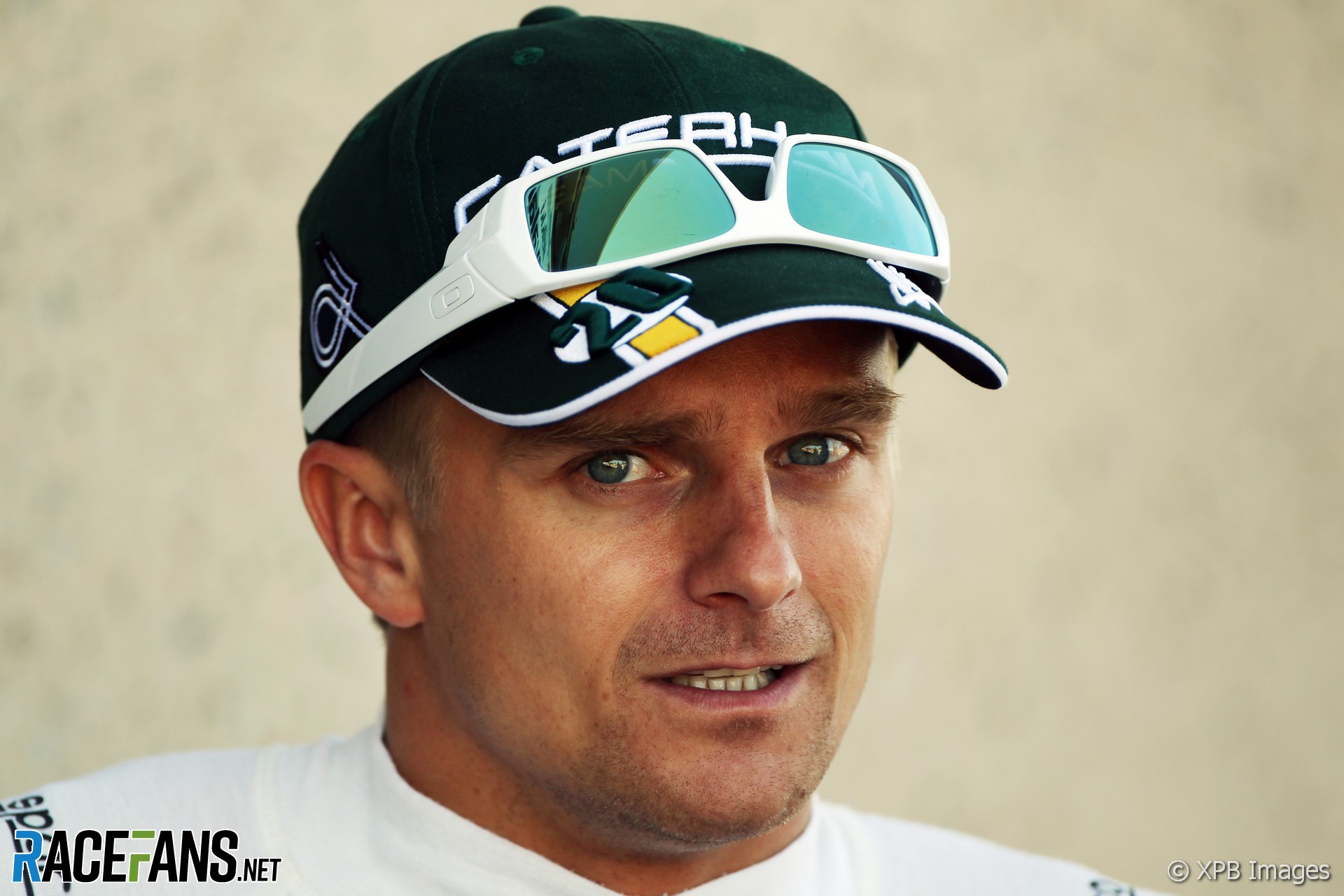 Heikki Kovalainen reached Formula 1 through the Renault Driver Development programme – in fact, every car he raced prior to F1 had a Renault or Renault-derived engine – and he made his debut for their F1 team in 2007.

He began karting in the early nineties and marked himself out as driver of promise with an encouraging second in the 1999 Formula A Finnish karting championship. The following season he underlined his credentials with wins in Finnish Karting Formula Super A, the Scandinavian Championship, the Paris Bercy Elf Masters Championship and runner-up in the Finnish Championship. He was voted Kart Driver of the Year in Finland.

This was the moment he chose to began car racing and switch his attentions to the British championships. He entered British Formula Renault which, the previous year, had been won by compatriot Kimi Raikkonen before jumping straight into F1.

Kovalainen’s progress was a little more sedate: he managed fourth overall with a pair of wins, beaten to the title by Carl Breeze. Aided by the Renault Driver Development programme he stayed in British racing and moved up to Formula Three with Fortec Motorsport alongside Brazilian Fabio Carbone for 2002.

The team used a powerful new Renault engine and Kovalainen came on strong late in the season, winning five of the last nine races. That moved him up to third in the championship behind Robbie Kerr and James Courtenay. At the prestigious F3 races in Macau and Zandvoort he finished second and fourth respectively.

The RDD steered his career towards more powerful single-seaters: the (Renault-owned) World Series By Nissan, where he teamed up with fellow future F1 racer and Renault-backed driver Franck Montagny at the Gabord team.

Montagny was in his third year of World Series by Nissan, having won the championship in 2001, and wrapped up the title for a second time with nine wins. Kovalainen won just once and finished second in the championship with 134 points to Montagny’s 241.

Renault kept their faith in the young Finn and gave him his first F1 test in December, driving a 2003-spec R23B at the Circuit de Catalunya in Barcelona, Spain. Montagny and Jose Maria Lopez also drove. Kovalainen had another test for Minardi at Vallelunga, but it was Renault who signed him as their second test driver for 2004.

Kovalainen spent a second year in World Series by Nissan in 2004, moving to the Pons team. With Montagny gone he won the championship with 192 points and six wins ahead of Tiago Monteiro, another F1 racer of the future, who won five times and scored 162.

But it was his performance in that year’s Race of Champions in Paris that arguably earned him the most attention. In the rapid knockout event he dispensed with F1 racers David Coulthard and Jean Alesi, followed by seven-time champion Michael Schumacher in the semi-final. He then beat World Rally Champion Sebastian Loeb over both stages of the final to win the event outright.

The following season saw Kovalainen graduate to the new GP2 series with the Arden International team. He had the distinction of being the first person to win a race in the category, and added another four wins during the season. Only a problem during his pit stop kept him from winning the Monaco round as well.

But he and Arden were caught out by the progress of Nico Rosberg and the ART team. Rosberg took over the lead of the drivers’ championship with three rounds remaining and beat Kovalainen by 15 points.

Kovalainen also returned to the Race of Champions in 2005, but was knocked out in the semi-finals by Tom Kristensen, by 0.067s.

Renault promoted Kovalainen to full-time test driver for the F1 team in 2006, replacing Montagny. It proved an especially useful place to be when, during the off-season, it emerged that world champion Fernando Alonso would be leaving for McLaren in 2007.

Kovalainen racked up over 23,000km of testing and was rewarded with a promotion to a race seat in Alonso’s place alongside Giancarlo Fisichella for the following season.

His arrival in the championship was not met with instant success. His ragged drive at Melbourne earned a public scolding from Flavio Briatore.

But Kovalainen settled in and within a few races was beating Fisichella. By the end of the year he had comfortably out-scored the Italian, although there was no denying the French team had lost their edge. It was Kovalainen that scored the team’s only podium finish of the year with a fine drive in the rain at Fuji Speedway.

Alonso’s year at McLaren ended in a falling-out that saw the Spaniard leave the team. Kovalainen made public remarks that he did not intend to be a ‘number two’ driver, suggesting he did not want an inferior role to Alonso at Renault.

His first year with McLaren began with a string of races hit by ill luck: the Safety Car spoiled his race in Melbourne, he picked up a puncture on the first lap in Istanbul, and in Barcelona he crashed very heavily after suffering a front wheel failure.

So it was appropriate that, when he finally won a race, it was thanks to a deserved change in fortune. His victory at the Hungaroring, largely thanks to Felipe Massa’s late engine failure, made him the 100th F1 driver to win a Grand Prix.

Kovalainen often struggled to get on terms with team mate Hamilton and ended the season 45 points behind his world champion team mate. Although he complained that qualify strategy tended to favour Hamilton there were question marks over his performance at tracks such as Monza, where he had to settle for second place behind Sebastian Vettel’s Toro Rosso.

The 2009 McLaren was a step backwards for the team, but even so Kovalainen was rarely on a par with team mate Hamilton. The team admitted that in some races Hamilton was able to run development parts before Kovalainen, but that didn’t wholly explain Kovalainen’s deficit.

At the end of the year he was replaced at the team by Jenson Button.

Out of the eight drivers who drove for new teams in 2010, Kovalainen was the highest-ranked of them all. But such was the gap between the new teams and the midfield teams he never had the chance to race for points.

The most memorable moment of his season came when his car spectacularly caught fire at the end of the Singapore Grand Prix, and Kovalainen seized a fire extinguisher to put out the blaze.

It was much the same again in 2011. Lotus increased its margin over the other two teams, but only rarely was Kovalainen able to beat any of the drivers from the midfield drivers.

On the few occasions the opportunity presented itself he took advantage, such as at Singapore, when he finished in front of Vitaly Petrov.

The hoped-for improvement in performance and arrival among the midfielders did not happen in 2012 as Lotus metamorphosed into Caterham. This might have fazed Kovalainen, but in Monaco he kept a McLaren driven by an off-form Jenson Button at bay to claim 13th place, which stood as the team’s best result of the year until the final round.

Kovalainen retained his ties to Caterham and made six appearances for them in practice sessions.

He was then called up to stand in for Raikkonen, who had vacated his seat at Lotus two races before the end of the season. Caterham released Kovalainen from his contract to return to the team, formerly known as Renault, as a substitute for his compatriot in the United States and Brazilian Grands Prix.

However he was unable to add to Lotus’s points haul in his two appearances for the team.