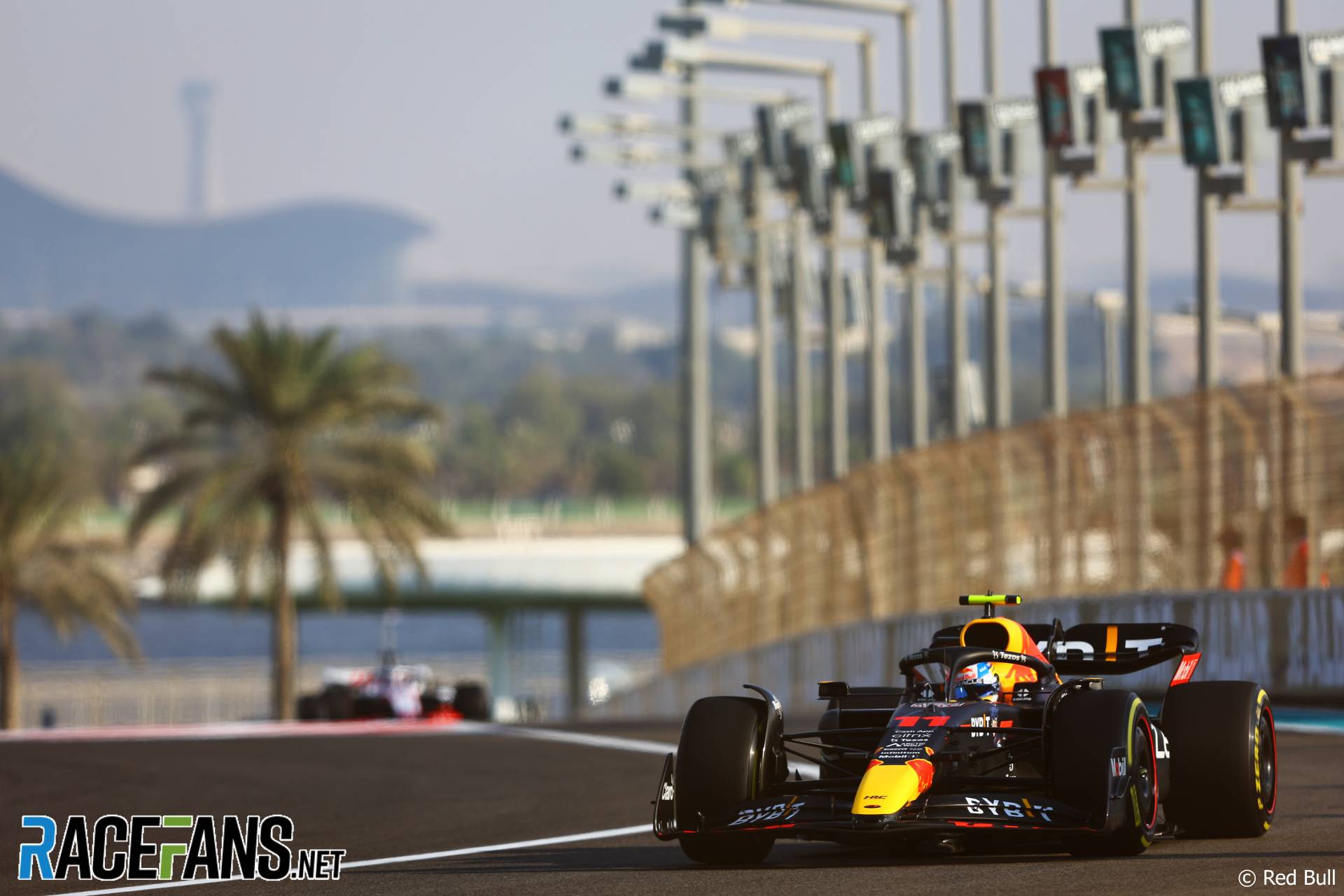 Sergio Perez headed a Red Bull one-two ahead of Mercedes in final practice for the Abu Dhabi Grand Prix at the Yas Marina circuit.

Perez’s best time of a 1’24.982 saw him head into qualifying a tenth-and-a-half quicker than Max Verstappen, with Lewis Hamilton almost a quarter of a second behind in third. However the Mercedes driver is under investigation for failing to reduce his speed sufficiently when the red flag was shown.

It was a typically bright, warm start to Saturday in Abu Dhabi as the final practice hour of the 2022 season began. With the track hotter than it likely would be for any further session in the weekend, very few drivers chose to head out in the early part of the session.

The two Ferraris of Carlos Sainz Jnr and Charles Leclerc enjoyed the track to themselves in the early minutes, with Sainz setting the initial benchmark of a 1’27.821 on medium tyres before Leclerc beat his team mate by half a second on his first flying lap.

Mercedes then took to the track on the soft tyres, with Lewis Hamilton going easily fastest with a 1’26.040, while team mate George Russell moved into second with lap just under half a second slower than his team mate.

Leclerc improved on his original set of mediums to go second quickest, half-a-tenth slower than Hamilton, while the two Alpines of Fernando Alonso and Esteban Ocon used mediums to go third and fourth fastest-respectively.

Lando Norris alerted his team to a possible brake fire on his front-left wheel and was told to pit and abandon his run. He was soon sent back out again, McLaren seemingly satisfied his car was safe. Soon after, Sebastian Vettel reported a similar problem on his Aston Martin, with smoke visibly rising from his own left-front wheel.

Perez set a new fastest time of the session with a 1’25.861 on the medium tyres, before practice was red-flagged at the half-hour mark when Pierre Gasly suffered a failure at the front-left of his car at the exit of turn nine, leaving a small piece of debris just off the racing line. While the debris was cleared, Hamilton appeared to overtake both Norris and Kevin Magnussen under the red flag on the approach to turn five. Hamilton will be investigated after practice for failing to slow under red flag.

The session resumed shortly afterwards, with many teams opting to head out on soft tyres to work on their single lap pace ahead of qualifying. Hamilton moved back to the top of the times with his first effort, before Perez went almost a quarter of a second quicker than the Mercedes to retake the top spot. Verstappen moved into second place by improving his personal best time, but lost time after running wide at the exit of the turn five hairpin.

Despite a late rush out onto the circuit for the final minutes, only the Ferrari of Leclerc improved at the chequered flag, moving to sixth position. Perez therefore ended the session as the fastest driver, ahead of team mate Verstappen and the two Mercedes of Hamilton and Russell. Norris was fifth in the McLaren, ahead of the two Ferraris of Leclerc and Sainz. Daniel Ricciardo was eighth in the second McLaren, with Sebastian Vettel completing his final practice session of his career in ninth position. Alexander Albon completed the top 10.