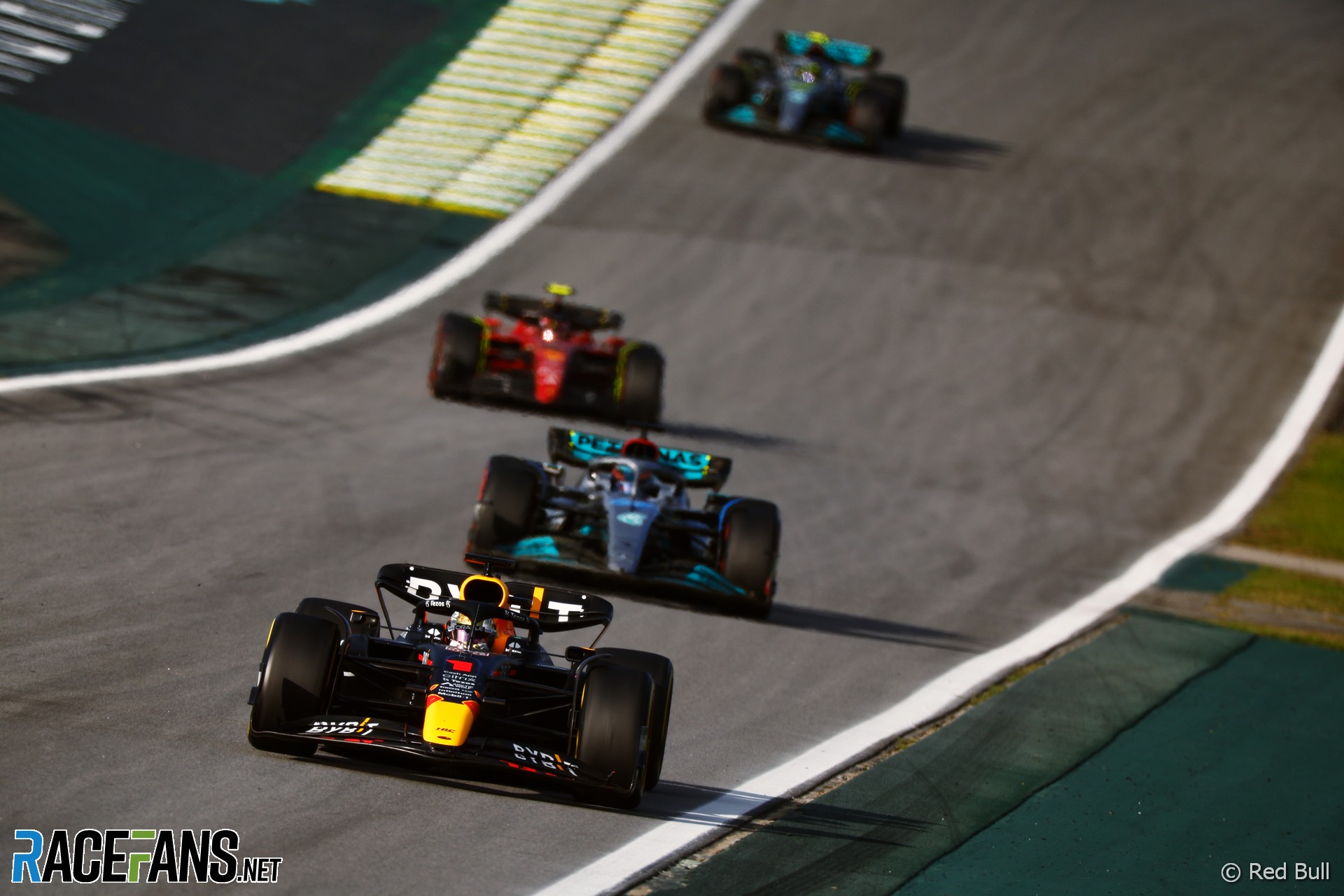 Mercedes’ competitive showing in this weekend’s Brazilian Grand Prix has given Lewis Hamilton the impression their rivals have lost some of their performance.

The team has locked out the front row of the grid for today’s grand prix after George Russell won yesterday’s sprint race. Hamilton finished third and gains a place on the grid due to Carlos Sainz Jnr’s penalty.

The Mercedes drivers made their way forwards in the sprint race, both passing world champion Max Verstappen. Hamilton said his team has clearly made progress but he feels that alone does not explain their performance this weekend.

“Definitely I think [we’ve taken] a step,” he said. “We know that there’s some real changes that we can make with the car to get us back to a better fighting position for next season.

“I don’t fully understand, like, we’ve definitely taken a step forward but it’s almost like the other two teams have taken a step back. I don’t know if that’s right or not, but it definitely feels that way.”

He expects the team can continue making gains into the 2023 F1 season. “I think we definitely know where we’re going and what we need to do to put us in a fighting position for next year,” said Hamilton. “So we’ll be super, super-focused. Everyone I know is already ready to turn up this winter and put in the effort.”

His team mate Russell believes some of their gains have come from reducing the weight of the W13, which the team has been able to do as it’s solved the aerodynamic problems which plagued it earlier in the year.

“Definitely the car is a little bit slimmer than it probably was at the start of the year,” said Russell. “So that’s a bit of free lap time we’ve gained.

“Probably the characteristics of the car are a little bit better. So it’s definitely difficult to put a single figure on how much the car has improved. But I think the lap times speak for themselves.”

Mercedes have been in contention for victory on several occasions this year but are yet to win a grand prix. “We’ve had an opportunity as a team to win these last three races,” said Russell. “We were nowhere near that at the start of the year.

“I think we all feel really confident that we’re on the right track to getting back to where Mercedes belongs. I think that’s really exciting for all of us.”

“The factory is going to be pumping on all cylinders across the winter and everybody’s going to be so motivated to come back,” he added. “This result is such a morale-booster for everyone, and what we really needed to keep on pushing.

“I think if we can hit our targets, the targets we’ve set out are absolutely the right ones. And we just need to continue on this path that we’re on and see what we can achieve next year.”

However Sainz is certain Ferrari, who were far from the pace in Mexico two weeks ago, haven’t lost performance this weekend.

“I’m pretty certain we haven’t taken any step backwards,” he said. “I think they’ve just simply done a better job at improving the car and putting downforce on the car.

“I don’t feel like they have a lot of a gap to close in the winter, because I feel like today they were the fastest. So if anything, it’s us and Red Bull that need to be aware that, if we want to be quick next year in the race, we need to put some downforce in the car and keep progressing.

“We’ve seen it before: the rate of development at Merc is second to none. I think they’ve been showing all these past seasons that even if they’re leading, or they’re on the back foot, starting the season, they’re always the team that developed the most. It shows that we need to have a good winter. Not only that, we will need to develop well during the season next year.”