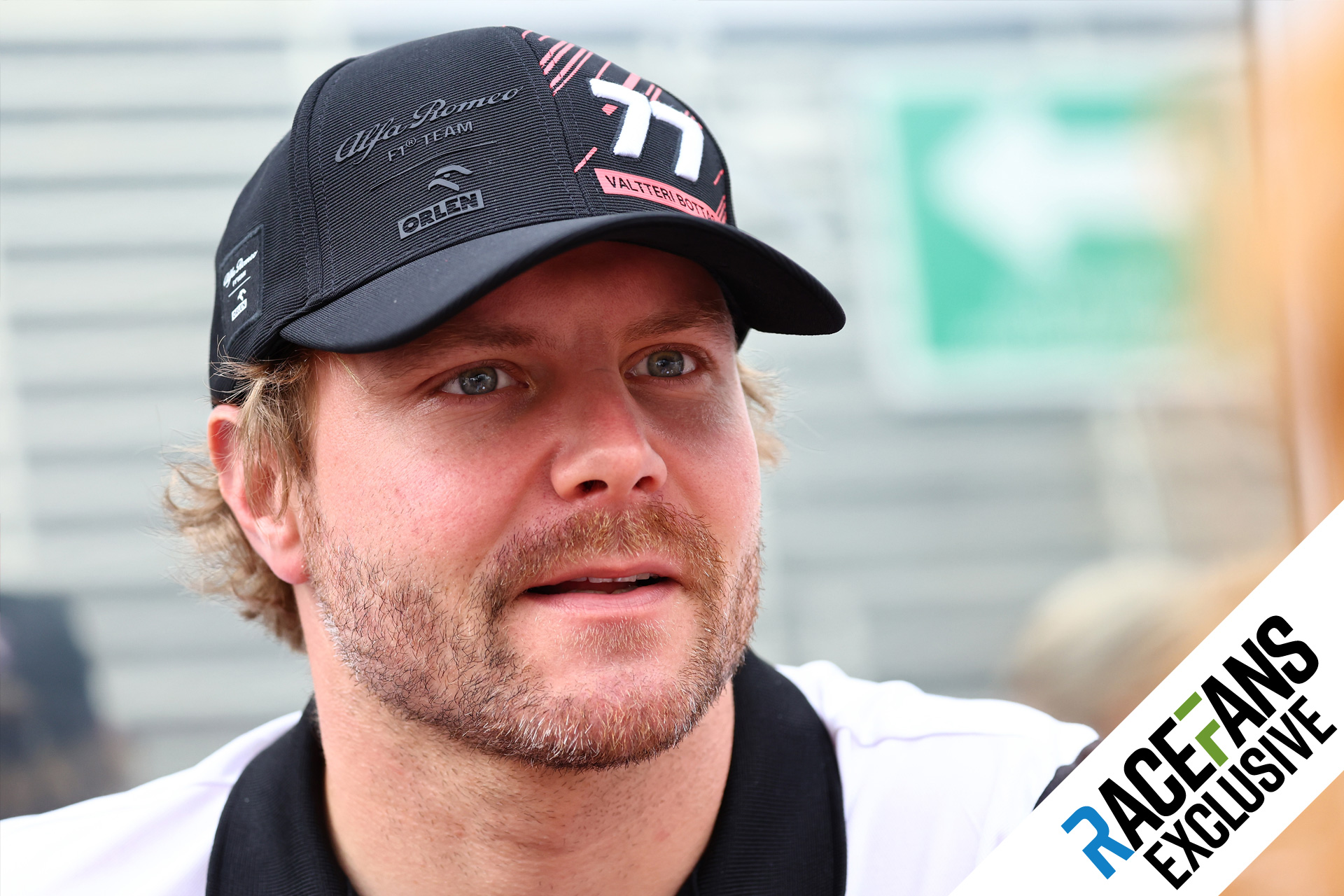 To say that fans have seen a new side of Valtteri Bottas since his departure from Mercedes to join Alfa Romeo for the 2022 season would be putting it lightly.

In the thick of the fight at the front at Mercedes over five seasons, Bottas was often quick, sometimes stunningly so, but always under intense scrutiny and pressure – as much from himself as anyone else.

But while his move from Brackley to Hinwil in Switzerland has inevitably brought a slip down the grid, the 10-times grand prix winner seems to have embraced his escape from the pressure-cooker environment at the front of the field. Where he may have only shown flashes of his cheekier side at Mercedes through the occasional TikTok, since joining Alfa Romeo he’s been quite literally flashing his cheeks every chance he gets – from auctioning off prints of him swimming nude in a Colarado river to sharing videos of him naked in a Finnish sauna.

Earlier in the season in France, RaceFans inadvertently inspired Bottas to spark a new fashion trend by offering him one of the Circuit Paul Ricard bucket hats provided to journalists. After barely leaving the crown of his head for the rest of the weekend, you can now buy an official Valtteri Bottas bucket hat of your own, should you be so inclined.

He isn’t sporting one when RaceFans meets up with the Alfa Romeo driver in the Mexico City paddock, but he is visible relaxed. Clearly content in his new surroundings less than a year on from being let go by a Mercedes team who had grown deeply fond of him, as evidenced by the warm farewell he received at the factory at the end of last year. But by Bottas’ own admission, he now looks back on his time with Mercedes and realises just how mentally taxing it was for him to be racing for the world champion team.

“Especially the first couple of years – I was so, so hard on myself,” Bottas admits, candidly.

“I wanted everything ‘now’ and then it was difficult to deal with it when it didn’t happen, that I couldn’t win the title in the first couple of years. It was just hard to accept. I was really harsh on myself, and definitely sometimes being a bit more chilled would have helped.”

Now, Bottas is a different man and a different driver. Heading towards the end of his first year with his new team and having gone from being in the mix for poles and wins to scrapping to get inside the top ten, is he approaching race weekends in 2022 with a different mindset, much like he is taking to his life off the track?

“Yes and no,” Bottas replies.

“Obviously it is different that we’re not fighting for wins, realistically, at the moment or world championship titles. So that is a different feeling in a way that I feel personally a little bit less pressure in that. But also it is because of the team environment, why I feel less pressure.”

Bottas hit the ground running after joining Alfa Romeo. He scored 40 points over the first seven rounds to springboard his new team up to fifth place in the constructors’ championship. It was an impressive early showing by the team which ended last year second-to-last. But points have come few and far between since then, as Bottas and his team found themselves swallowed up by the rapid rate of development their rivals enjoyed as the season progressed.

Now Alfa Romeo are under siege in sixth. Going into the Mexico weekend they lie just three points ahead of Aston Martin, who have had the total opposite form over the season. But having been at the top, Bottas knows how the game works. With a multi-year contract, he says he’s focusing on the long-term with Alfa Romeo.

“Every year in my career, I’ve always wanted to do as well as I can,” he explains. “Trying to have the perfect race weekend and be the best version of myself – that never changes.

“But now, at the same time, it’s also accepting the fact that we’re aiming for the years ahead and accepting the fact that nothing happens overnight. The team can’t jump from P9 or P8 to P2 or P1 – it doesn’t happen like that. So we accept the fact that it can take time. So all the development work for sure is for this year, but it’s also for the future and giving ourselves almost a little bit of time to change things and I think it’s good.”

Not long after Sebastian Vettel moved from Ferrari to Aston Martin, the former champion admitted that returning to the midfield had given him a new appreciation for what life is like for teams outside of the fight at the front. However, after starting his career with Williams for four seasons before his big Mercedes break, Bottas says he’s well aware of how much effort his new team and those around him put into everything they do.

“Every team I’ve been at, they work so, so hard,” Bottas says. “It’s such a competitive sport that everyone just wants to get better and better.

“There’s always that mindset with anything you do. I feel like a championship-winning team, or a team fighting for P9, they work as hard as anyone else. So I think, yeah, I haven’t seen a difference in that.”

Bottas has every incentive to want to stick around in Switzerland. With Alfa Romeo ceasing their partnership with the Sauber organisation who operate the team at the end of next season, the evolution into Audi’s factory team for the new power unit formula in 2026 will begin. Bottas says that the German marque’s decision to take its very first steps into Formula 1 by teaming with Sauber is no less than “huge” for the team.

“I think it shows that they believe they can do a successful project with Sauber. It shows that we definitely have the facilities and the potential – which I’ve always been saying, when I’ve seen everything. So it’s good – it is huge for the team. Still, we need to wait for a few more years. But it is great. I couldn’t be happier for that.”

But with the Audi evolution still a way off on the horizon, Bottas says he is not getting ahead of himself. For now, Sauber are Alfa Romeo and he must help lead the team as they are now.

“Obviously there still is quite a few years for that to happen and still nothing changes for next year,” he states. “My focus is on finishing this year and doing good next year and hopefully we’ll have a good car.

“I think it’s a positive thing for the team. I think it’s a great opportunity and I think it shows that they respect what Sauber has in terms of facilities and people and stuff. So I think the future of this team is quite exciting.”

Bottas may not be climbing on top of the Formula 1 podium this season, but he certainly hasn’t stopped winning races. Inspired by his partner, professional road cycle racer Tiffany Cromwell, Bottas has become a bona fide bicycling fanatic, entering two-wheeled races of his own and even taking a victory in his age class in a 60-kilometre off-road bike race in Kansas before the United States Grand Prix.

Following Bottas on social media, you’d be forgiven for assuming he was a cyclist whose hobby is racing Formula 1, not the other way around. So has investing his energy into this very different form of racing helped with maintaining good mental health over a gruelling F1 calendar?

“For me personally, yes. It’s a nice way to get away and do something different. I think it’s important with such a hectic calendar. The race weeks are normally pretty intense, especially from Wednesday onwards. But when I have some free time, it’s something that I really enjoy doing. It’s a way for me to clear my mind and explore and get fit, so it’s nice.”

As the conversation continues in the Alfa Romeo hospitality suite, there’s a sudden interruption. It’s none other than Zhou Guanyu, Bottas’s team mate, offering up a plate of sweets – chilli and watermelon flavoured, to be precise. Bottas politely declines his team mate’s offer, but it shows the genuine friendship that’s formed between the rookie and the veteran over their year together.

Alfa Romeo’s driver line-up may have changed completely in 2022, but the harmony within it has been a constant. Last year, Kimi Raikkonen and Antonio Giovinazzi left the team as firm friends after three seasons together. So is there something about the team culture at Alfa Romeo that leads to harmony between team mates in a sport where both drivers in the same team can become the fiercest rivals, or Bottas and Zhou just have compatible personalities?

“I think it’s both,” says Bottas. “I’m sure you need certain drivers to be able to work together and you need a certain type of characters to match in a way.

“But as a team, it’s a pretty friendly environment in a way, and just really a good team spirit. It would be nice to know why that is, but for me I was just immediately comfortable coming here. And same for my team-mate. Even though it’s his first year, he’s been immediately really comfortable with everyone and gained a lot of confidence quickly on, so that’s good.”

With his tenth season in Formula 1 almost at its end, the Bottas of 2022 is far from the fresh-faced 23-year-old who first lined up on the Melbourne grid back in 2013. Now aged 33, there’s still plenty of time left for Bottas to continue in the sport as long as he has the drive and the results to back it up. But while what will come in the future is unknown, he can at least look back and recognise how far he’s come.

“Definitely the older you get, the more you experience things, I think you learn more about yourself,” he explains. “I think this sport is a pretty good life school.

“It’s a pretty high-pressure environment overall. When you are a person that wants to succeed and wants to do your best, there’s always ups and downs and you learn so much about yourself, like how to deal with the pressure and how to deal with disappointments. How to actually enjoy the success – those kinds of things.

“Every year is different in this sport and you always learn something more so. Nowadays I look back to myself five to eight years ago, I have so much bigger picture of this whole thing and accepting of many things and I’m so much more comfortable within myself. It’s been a nice school.”

8 comments on ““I was so hard on myself… it was difficult to deal with”: Bottas speaks to RaceFans”