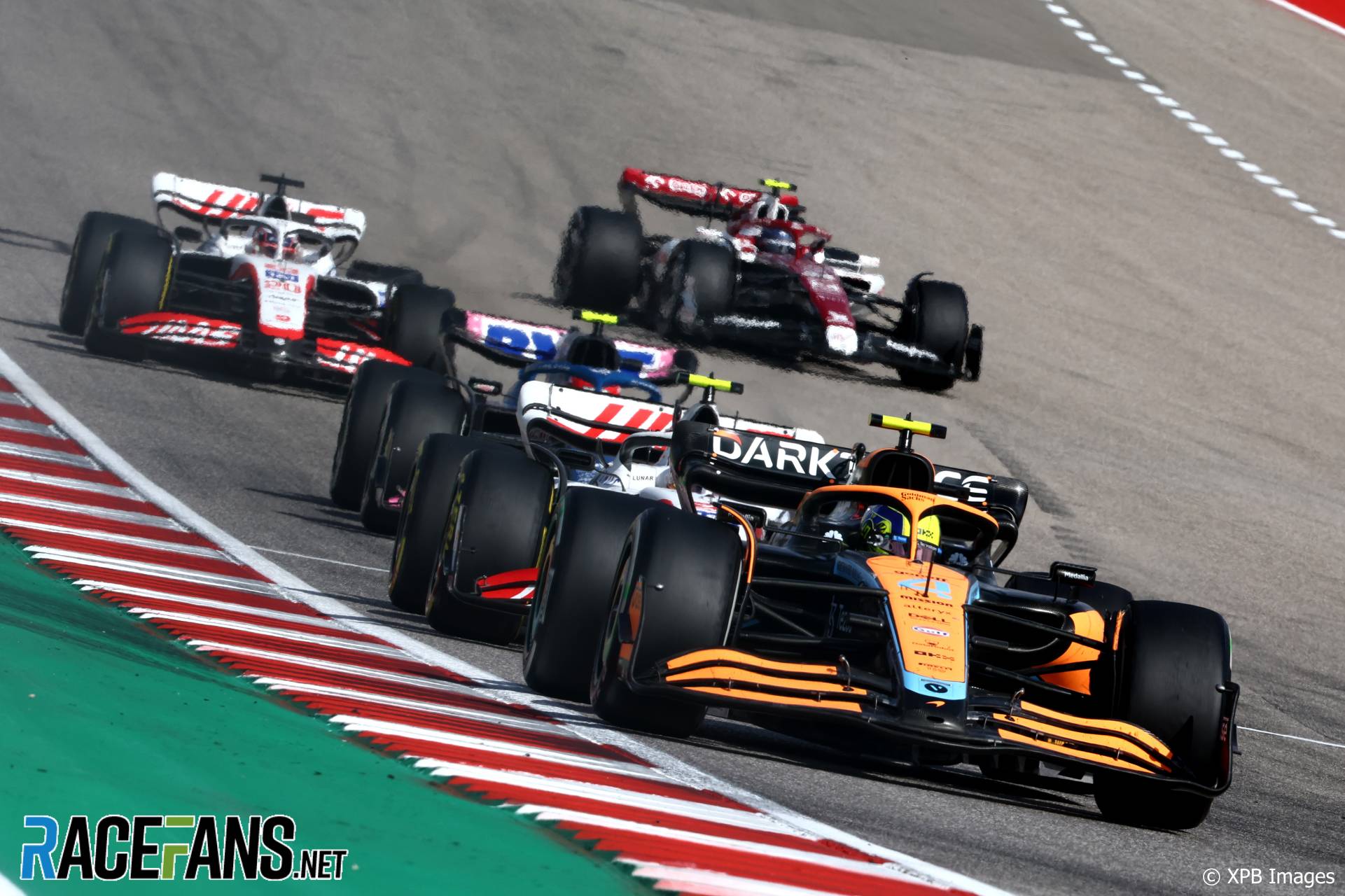 Lando Norris says he had to take medication during the United States Grand Prix weekend to ease the pain caused by the bumpy track surface.

The McLaren driver finished sixth in yesterday’s race but admitted he was “heavily dosed up on headache tablets” due to the bumpy nature of the circuit.

“I struggled a lot with that this weekend,” he told media including RaceFans after the race. “Have you seen how hard my heads hits? I’ve got internal bruising on my head or something, so it’s really not nice.”

Norris said he isn’t sure whether McLaren’s car gives a rougher ride than others. “I don’t know if it’s better for us or worse than other cars. But it’s something I struggle a lot with.

“When I take the tablets it probably doesn’t make a big difference in the end but it’s something I struggle with.”

The bumpiness of the Circuit of the Americas has been a problem for years. The track owners made the latest in a series of improvements to the track surface ahead of F1’s return last week.

However the stiffer nature of the cars built to new 2022 regulations exacerbated the problem, said Norris. “Some bits were less [bumpy], so I’m very happy they did that.

“But they resurfaced half of it. That half is a little bit better. Not as good as it needs to be, especially in these cars, I think in last year’s cars we wouldn’t be complaining. With this year’s cars we complain about everything.”

More works needs to be done to improve the surface again for next year, said Norris. “Half it was was re-done, I’m happy with that, but the bits which were not re-done, I think if you just go and walk on the track, you can see we’re tearing apart the circuit. There’s massive gaps, there’s massive holes, it’s just not the standard it needs to be for Formula 1.”

Norris was satisfied with his performance under the circumstances. He fell to 15th place when he made his last pit stop which left him with a lot of ground to make up.

“I thought more people would box,” Norris admitted. “So when he said I had 20 laps to go, I’m like 18 behind Fernando [Alonso], I was like, ‘oh, no’. I didn’t think it would be possible to do especially because I had to overtake four other cars. So it was tough.

“But the thing DRS was huge today. We had such a big headwind on the back straight as you had DRS you could gain six tenths or even more in one lap. So it helped me, made my life a little bit easier. But I think if I made one too many mistakes, it wouldn’t have been possible.”

He caught and passed Alonso for sixth place with two laps to go after an exciting scrap. “Even when I got to him, it wasn’t like I went straight past,” Norris explained. “I got a bit stuck, he pulled away a little bit. Then he made one mistake in turn 11 and I managed to get past him there.

“It was tough, we had some close ones, I looked in my mirror and it looked like we were going to make some contact. But if there’s one guy I trust more than anyone on track it’s Fernando at the end of the day. He’s the last guy I want to race against with two laps to go but also the most fair and respectful.”