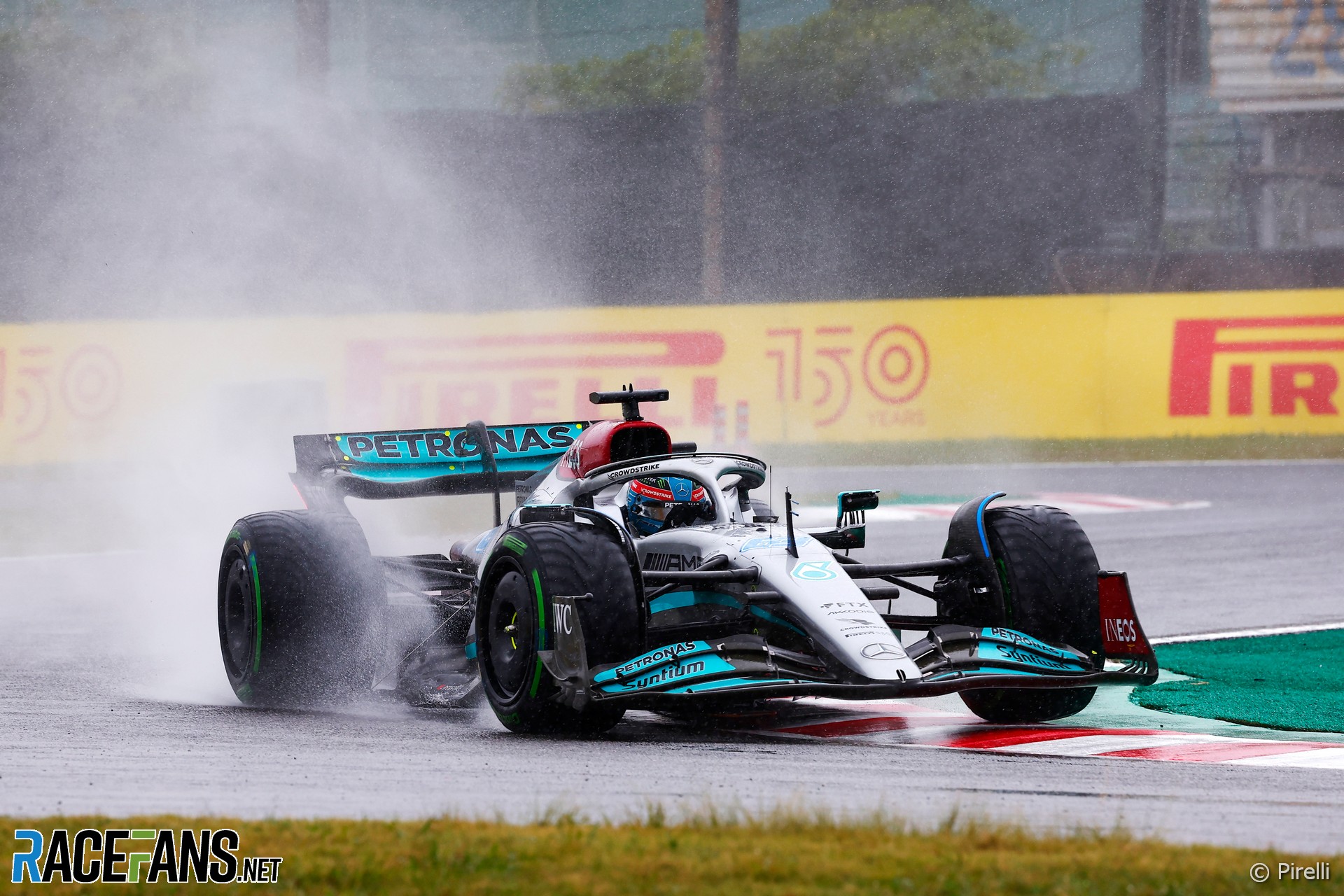 George Russell was the fastest driver ahead of team mate Lewis Hamilton in a wet second practice session for the Japanese Grand Prix at Suzuka.

The Mercedes pair went quickest in the 90-minute afternoon session, ahead of the two Red Bull drivers Max Verstappen and Sergio Perez.

After opening practice had been run entirely in wet conditions, the circuit was still fully wet for the second of the two Friday sessions. Unusually, half an hour was added to its duration as F1 originally planned to use the additional 30 minutes to conduct testing of Pirelli’s 2023 prototype tyres. Due to the wet weather, those plans were abandoned, although the session remained an extended 90 minutes.

Having crashed after the chequered flag in the opening session, Mick Schumacher was unable to participate in second practice as damage left him in need of a chassis change with his Haas team unsure whether it had been cracked in the accident.

When the session began, Nicholas Latifi was the first driver out on the track. He was soon joined by Carlos Sainz Jnr, who showed how tricky the track was when he ran off onto the gravel at the Degner corners, before setting the early fastest time with a 1’49.615 on wet tyres.

Latifi made a bizarre error when he appeared to turn off the track approaching the chicane and onto a road linking the west side of the circuit, rather than taking the chicane itself. The Williams driver had to awkwardly spin his car around to return to the actual race track.

After the first half hour was completed with drivers all on wet tyres, the two Mercedes of Lewis Hamilton and George Russell headed out on the intermediate tyres. Hamilton jumped to the top of the times with a 1’44.298, while Russell went into second almost a quarter of a second slower than his team mate.

The rest of the field started to switch over onto the intermediates, but grip was still at a premium around the wet circuit. Yuki Tsunoda ran off track at the Degners, bouncing lightly over the gravel, while Charles Leclerc raised heart rates at Ferrari when he slipped off the track at the hairpin and into the gravel. Luckily for Leclerc, he safely reversed out of the gravel trap and rejoined the circuit.

Verstappen moved to the top of the times with a 1’43.571 to go ahead of the Mercedes, before Russell and Hamilton both improved to go over half a second quicker than the Red Bull and retake the top two positions. Sergio Perez moved into fourth, just under half a tenth slower than his team mate, but ran off the circuit at the hairpin before rejoining in almost identical fashion to Leclerc before him.

With around half an hour of the session remaining, some drivers began to report the rain was increasing in intensity. However, unlike the first practice session, the conditions remained relatively consistent and a healthy number of cars continued to circulate as the light levels began to fade into the evening.

There were no notable improvements at the top of the times for the final phase of the session, however, leaving Russell as the fastest driver at the end of a wet first day of practice. Hamilton was second in the session, almost a quarter of a second behind his team mate, with Verstappen third for Red Bull another six tenths further back.