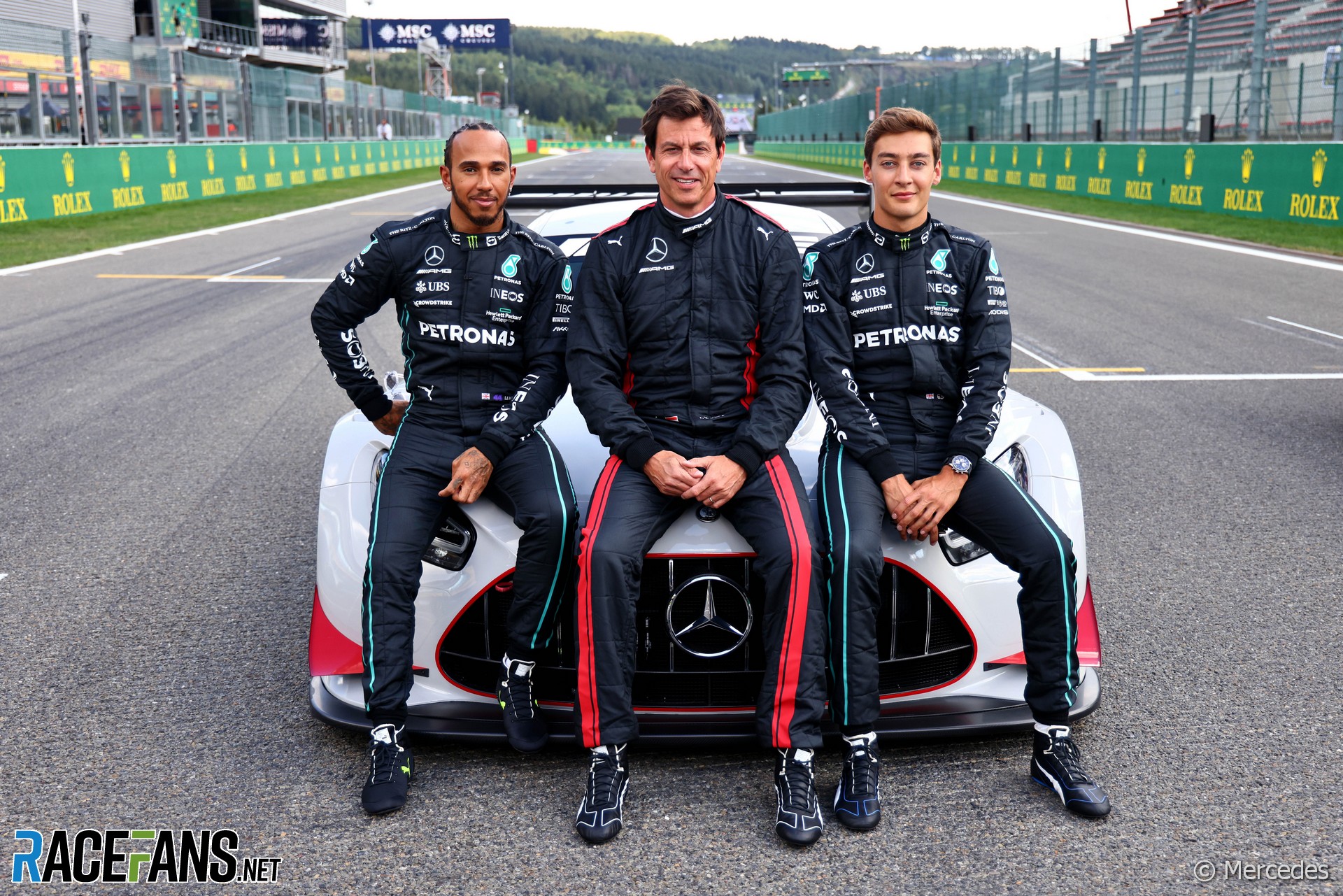 George Russell is on course to finish his first season as a Mercedes driver ahead of his seven-times world champion team mate.

However Mercedes team principal Toto Wolff suspects Lewis Hamilton will claim a record-breaking eighth Formula 1 title before his team mate wins one of his own.

Hamilton has won six of his seven championships to date with Mercedes, and missed out on another last year in controversial circumstances. Russell joined Mercedes this year and leads his team mate by 203 points to 170 with five races left.

However neither driver has won a race this year as the W13 has proved Mercedes’ least competitive car since the V6 hybrid turbo era began. Wolff joked Russell “got that timing wrong” by joining in a season which Mercedes have spent mostly on catch-up and rarely in victory contention.

Speaking to Channel 4, Wolff said he expects the team’s current driver line-up will return them to title-winning ways. “We just need to provide them with the car so that they’re capable to win races and championships,” he said.

“If we can do that, George can become a world champion and Lewis can add another title to his seven. It really comes down to us what good job we can do as a team.”

Russell scored his first F1 points in a cameo with Mercedes in 2020, very almost winning the Sakhir Grand Prix in Bahrain, and since joining the team full-time has stood on the podium seven times. He claimed pole position for the Hungarian Grand Prix, then matched his career-best result with second place in the Dutch Grand Prix at Zandvoort after battling with Hamilton.

“He could have had one [win] in Bahrain when he jumped in the car two years ago,” said Wolff.

“George is a great personality. He was obviously hoping to to be in the Mercedes and win races and championships. He got that timing wrong, but at least he has progressed to the midfield now.

“So that time is going to come. He will win races, he will race for championships, I think he absolutely has it in him. But maybe there’s another Lewis championship in between.”

The two drivers have encountered each other on track infrequently this year. One of their more spirited battles for position occured at the Dutch Grand Prix, where Russell passed Hamilton having switched to soft tyres in a late-race Safety Car period, unlike his team mate.

“They haven’t had a close racing between themselves [before that],” Wolff observed. “I said, after Zandvoort, for my feeling that was a little bit too close. [It] could have gone wrong. But they know, they are experts.”

Wolff is satisfied there is “respect” between the pair. The respect of the rookie that acknowledges his team mate is the greatest driver of all time, with Michael [Schumacher]. And the respect of Lewis, who sees himself in a way in terms of talent and age growing up and, in a way, as weird as it sounds because your team mate is your first enemy, Lewis mentors George also in a way.”