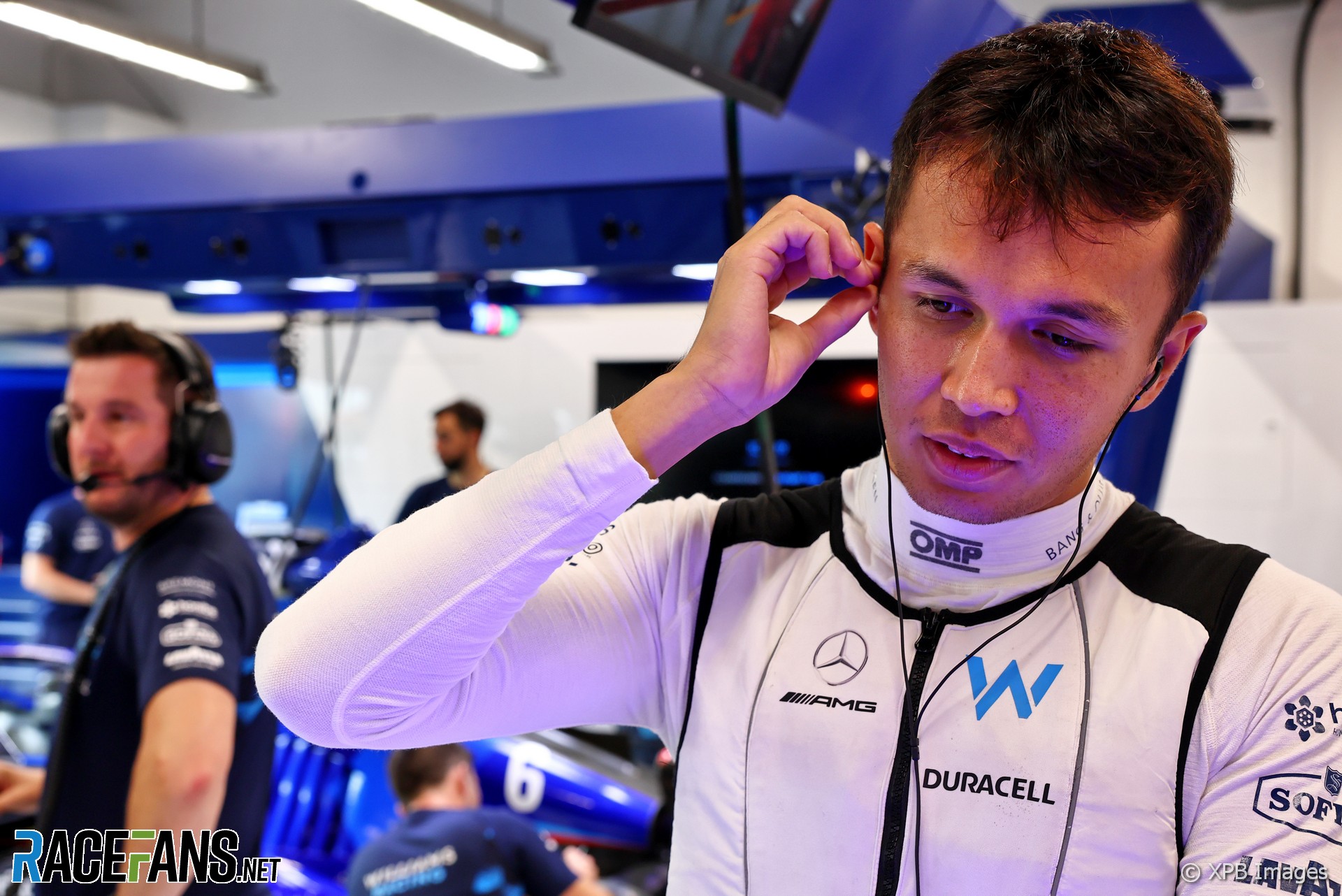 In the round-up: Alexander Albon says he felt better physically than he expected he would after his first day of running in an F1 car following his admission to hospital

Albon “coping better than expected” after returning from medical emergency

Albon missed the last round at Monza after he was suddenly admitted to hospital with appendicitis. After being released and recovering back in the UK, Albon was declared fit and able to race in Singapore this weekend, finishing Friday 16th in the practice standings. Asked how he was feeling after returning to the car, Albon said he felt “okay – I’ll leave it as just okay”.

“It feels hot out there,” he explained. “I think that’s normal. We knew it was going to be difficult. But I feel like I’m coping better than I expected.

“It feels okay when I’m in the car, generally speaking. It’s more just the heat – once you get out, you can feel that it’s obviously physical. But I feel like there’s no big issues, so I feel pretty good.”

The FIA have responded to reports claiming that two of the ten Formula 1 teams breached the maximum cost cap for the 2021 season, insisting that its assessment process is still “ongoing”.

Any team found guilty of exceeding the cap could be sanctioned by an FIA adjudication panel. In response to the reports it had identified breaches of the rules, the governing body said it was “currently finalising the assessment of the 2021 financial data submitted by all Formula 1 teams”.

“Alleged breaches of the Financial Regulations, if any, will be dealt with according to the formal process set out in the regulations,” the statement continued. “The FIA notes significant and unsubstantiated speculation and conjecture in relation to this matter, and reiterates that the assessment is ongoing and due process will be followed without consideration to any external discussion.”

W Series championship leader Jamie Chadwick, currently holding a 75-point lead ahead of what may be W Series’ final race in 2022, was fastest in the sole practice session by more than half a second.

Chadwick’s quickest time of a 2’13.529 was over half a second faster than fellow Britons Abbi Pulling and Alice Powell, despite spinning early on in the session.

Charles Leclerc admitted he had not enjoyed the most ideal start to his Singapore Grand Prix weekend after he was confined to the garage for half of the second practice session.

Leclerc only ventured out for his first laps in second practice over half an hour into the session after Ferrari worked extensively on his car. Despite ending the day second quickest behind team mate Carlos Sainz Jnr, Leclerc says he would have preferred to have logged more than just 14 laps.

“It’s never ideal to not have much running on city tracks,” said Leclerc. “The more laps you do, the faster you get.

“I’m not too worried. It’s just been not a great day. But I’m sure that we can have a clean FP3 and catch up a little bit on the mileage that we’ve missed from today. The only shame is obviously we didn’t do any race run today. But anyway, qualifying is important and I’m sure we’ll be strong.”

"A lot can go wrong after all as the drivers, whose heart rates are around 160-180 beats per minute during the race, navigate 14 left handers and another nine right hander corners while making about 62 gear changes each lap."

"With his skill and the way Red Bull are going at the moment, it is not out of the question that Max could get near Lewis’ records."

"This has all happened so quickly that at the moment we are trying to plug the gap, and then once we do that… Obviously in your head you’re making various contingencies, but I don’t really want to say what’s going to happen because I don’t know what the position is at the moment."

There’s no place like home for Richard Verschoor (Formula 2)

"I love it there, it's just a shame that we had a few issues during the year on the sporting side. Apart from that with the team, I’ve been really enjoying it. They’re all Italian, so it was a bit different when switching from MP, but I got used to it quite quickly. I’m really enjoying my time with them. Also, after our preparation time in the simulator, we always go for a nice lunch together in my favourite restaurant. "

"You can now personalise your Chrome browser with exclusive themes inspired by the McLaren F1 Team. The six new themes feature McLaren’s papaya car, and race day images from some of your favorite circuits."

"We intend Navarra Circuit to become an internationally admired and successful circuit business attracting many new customers and visitors, as we have achieved with all our other circuits."

"As his home city of Singapore hosts F1 this weekend, we interviewed our FIA Vice President for Sport Lung-Nien Lee about his priorities to grow motor sport in the Asia-Pacific region."

Behind The Scenes At The Iowa Speedway (Romain Grosjean via YouTube)

"Check out a little behind-the-scenes footage from the Iowa Speedway. One of the bumpiest tracks I have had the pleasure to drive on. Iowa is notorious for being a nightmare circuit. Picture a high-speed corner in F1 over and over again. Hear from my team and me as we give you some behind-the-scene outlooks on what goes on during our time spent on the track."

On the anniversary of Jacques Villeneuve’s World Championship, he took the A521 for a ride at the Temple of Speed. 💨@CanalplusF1 pic.twitter.com/sAKiFbuZXo

During practice, our six British drivers carried a commemorative message for Lorraine Gathercole, Chair of the British Women Racing Drivers Club (BWRDC) and racing driver, who passed away this week.

This weekend we will be racing in memory of her.#WSeries pic.twitter.com/cWOVS9vfXd

Only one static camera looking down the start/finish straight for W Series practice here in Singapore. No other cameras being used. Doesn't bode well. 🧐

people saying it's a sign W Series is dying etc that they're not broadcasting free practice, a note that it's really, really uncommon for 'non-competitive' sessions to be broadcast in any sport (ball sports, winter, motorsport)

tis why journos are in paddocks to write reports…

Pretty disappointing that our sanctioning body refuses to acknowledge or accept any responsibility for drivers getting hurt. It’s the same THEY said. WE knew better. It’s wrong these drivers continue to get taken advantage of by the system.

Following the announcement that Formula 1 has chosen to extend Sky Sports’ exclusive rights to broadcast F1 live in the UK, reader PeterG sums up the feelings of many…

Not surprised but still really disappointed.

Just wish they would let us have F1TV as I’d be happier paying £10 or so a month just for F1 rather than having to pay way more than that for a TV package featuring a load of stuff I have no interest in watching.

Wouldn’t even be too bad if the Sky F1 channel was available as a stand alone thing via Now TV or something rather than been bundled with the other sports channels for £33 a month on Now TV.
PeterG