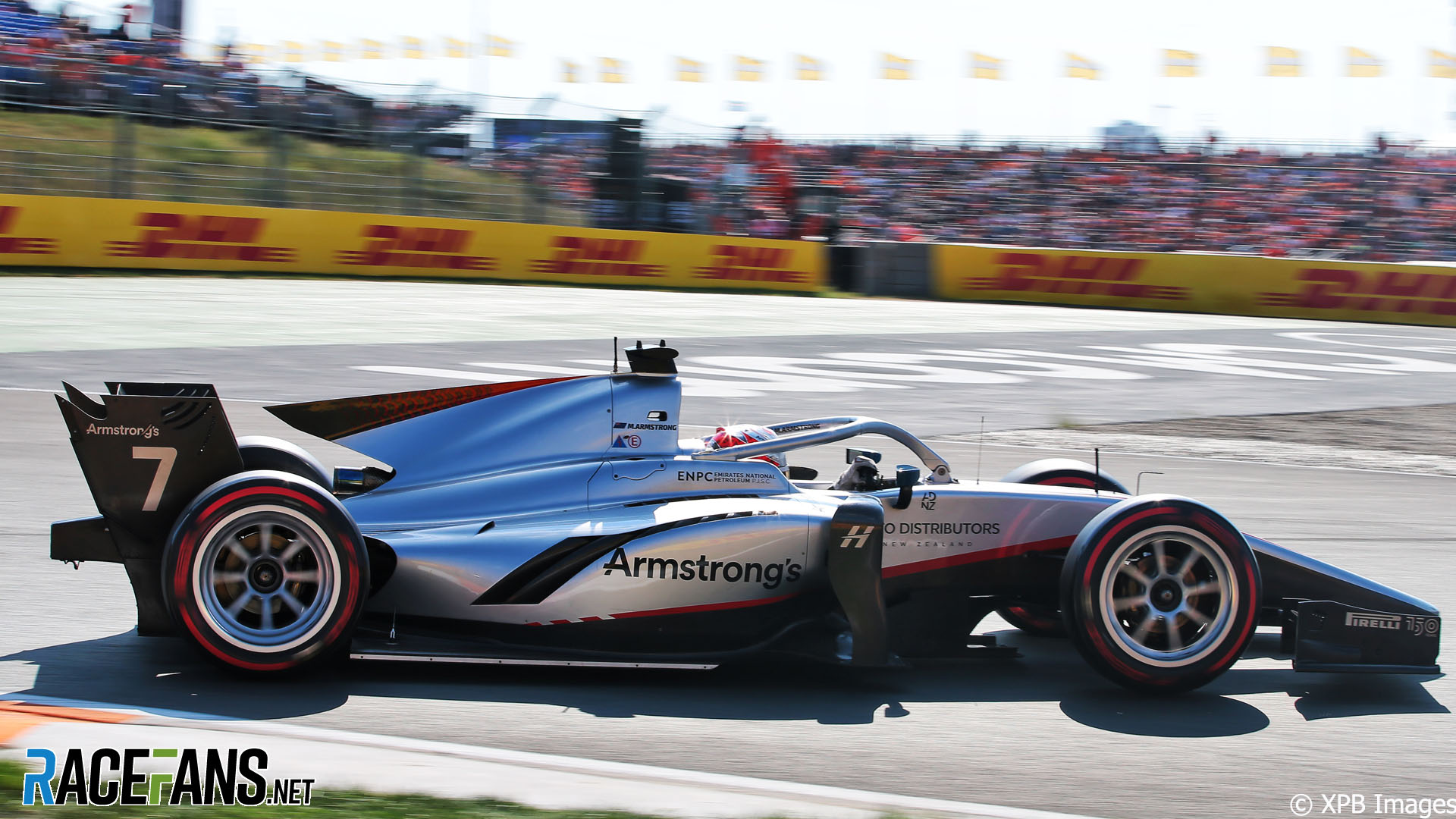 Marcus Armstrong claimed his third sprint race win of this year, leading every lap around Zandvoort despite a late race Safety Car.

Clement Novalak took his first Formula 2 podium in second place, with Dennis Hauger securing the final spot on the podium in third.

Novalak had started on partially-reversed grid pole with Armstrong alongside him on the front row. When the lights went out, Armstrong got the inside line into turn one and was able to take the lead, feeding Novalak back into Jüri Vips and Dennis Hauger following in fourth.

The fight for second and third allowed Armstrong to get away out front, with Novalak holding out through turn three while Vips fell behind Hauger and then was overtaken by Liam Lawson, pushed back to fifth.

Théo Pourchaire’s disastrous weekend continued to unravel as he went off at turn one of lap two, trying to overtake David Beckmann. Pourchaire slid through the gravel and was able to rejoin in 21st, ahead of only Tatiana Calderon who had been forced to start from the pit lane.

A yellow flag was shown at turn one after Olli Caldwell also went off, suffering a massive lock up at the start of lap four. He was able to get his car going again and avoid any further disruption but inevitably dropped to the back of the field. Caldwell came in on lap 13, ultimately retiring from the race after reporting there was “burning stuff in the car.”

Vips had a lockup into turn ten on lap 25, giving Richard Verschoor a chance to challenge for fifth but with the Hitech driver holding the position. Jehan Daruvala also had a spin in turn eight, managing to keep going but a long way from the sprint race points in 16th.

Calderon went off at turn two and into retirement, prompting a yellow flag which then became a Safety Car on lap 26. The Safety Car came in at the end of lap 28, the pack having bunched up behind Armstrong again when he took the restart for the final lap.

Armstrong went early, getting a clear lead into turn one as behind him drivers battled. Ayumu Iwasa was able to pass Verschoor to take sixth, going around the outside of turn one, while Novalak found himself almost a second back from Armstrong and all too close to Hauger behind.

The chequered flag saw Armstrong take the win nine tenths of a second ahead of Novalak, who nonetheless claimed his first podium in F2. Hauger completed the podium with Lawson and Vips holding onto places in the top five.

Iwasa and Verschoor claimed sixth and seventh, with Logan Sargeant taking the final points position in the sprint race to chip Pourchaire’s lead on him for second in the championship down to 31 points