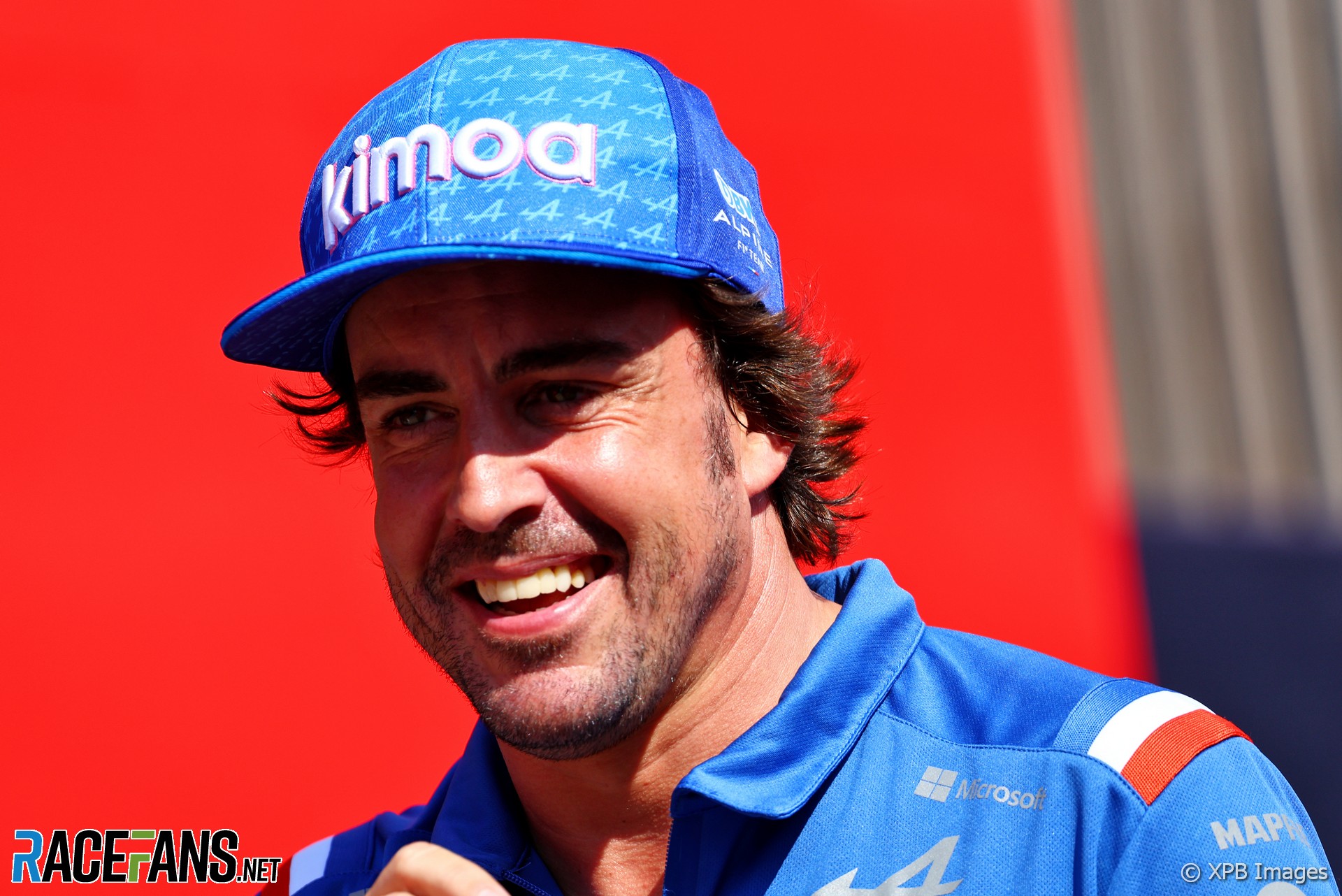 After yesterday’s Hungarian Grand Prix Alpine team principal Otmar Szafnauer gave every indication the team’s star driver Fernando Alonso was going to sign a new contract to remain with them.

Asked by RaceFans whether he was confident Alonso would stay at the team which lured him back to F1 last year, Szafnauer said: “Of course.”

Were there any big sticking points in Alonso’s new contract left to resolve? “No, not really. We’ve gone through all that. It’s just a matter of time. Just details. Little stuff.”

Yet, less than 16 hours after Szafnauer spoke those words, Aston Martin issued a press release declaring the two-times world champion had signed a “multi-year” deal to join their team from 2023.

It wasn’t only Szafnauer who gave strong outwards signs that, despite Sebastian Vettel’s impending retirement opening up a seat at Aston Martin, Alonso intended to stay put. The man himself said as much after Vettel made his announcement on Thursday.

“I would like to stay here,” he said in response to a question from RaceFans. “But there are two parties and I will not put a gun in the head of anyone.”

Aston Martin had unsuccessfully courted him before, said Alonso, following the team’s purchase by Lawrence Stroll, after which it initially competed under the name Racing Point.

“We spoke in 2020 when they were very competitive, obviously, and winning races and in the podium,” he said. “Before I came back. And it didn’t went well and I came with Alpine and I’m happy where I am.”

“So it will not take more than 10 minutes with whatever I am talking.”

He gave more than one indication he was prepared to look elsewhere. “All the teams are an option as long as they don’t have two drivers signed,” he continued.

“My priority is to be with Alpine because we’ve been working and developing this project together for two years now. We are more and more competitive and probably my wish is to stay.

“But we didn’t sit down completely and move forwards things so still everything’s ongoing.”

When Vettel told Aston Martin on Wednesday of his plans to retire at the end of the year, it didn’t catch them completely off-guard. The team had begun discussions about his future earlier in the year and made it clear they would explore opportunities with other drivers in order to ensure they were not caught on the hop if they needed a replacement.

“The good thing about about our relationship with Sebastian was always that we were very clear that at a certain point we will need to look for other solutions if he will not come to an agreement,” said team principal Mike Krack yesterday.

“This is things that we had discussed already months ago when we started already discussions and he’s happy with that. He knows how this business is run and that you cannot drag until November the decision. So from that point of view, I think we are very transparent him towards us and us towards him and so there is no bad feelings.”

How would Alonso have weighed up competing offers from the two teams? Undoubtedly the not-inconsiderable matter of his retainer will have had a bearing. “Every driver I’ve ever negotiated with, it’s been a question of money and other things too,” said Szafnauer. “For whatever reason, they want the most money and we want to pay the least.”

Like most drivers, Alonso is also sensitive to the commitments his team place upon him outside of a grand prix weekend. He said last week this influenced his decision to take a break from F1 four years ago.

“In 2018 I had a lot of marketing commitments, a lot of travelling. I was exhausted mentally, not physically or driving. Now I’m very fresh also travelling-wise.”

But above all what Alonso wants is to compete for wins and titles. He yearns to disprove those who are convinced the 41-year-old’s last grand prix win in 2013 and last championship victory in 2006 will not be repeated.

“I stopped in 2018 because I had bigger challenges in my head. I had the Le Mans, I had the IndyCar. I wanted to try cross-country rally.

“So I had other challenges and in 2018 or ’19, let’s say, the possibilities that I had to race here in the paddock, they were not attractive. There was only one team winning. Bottas and Hamilton, they were fighting for each race and each pole position. So it was for me not the place to be and not a happy place. So I decided to stop. I don’t know if that came to play into Sebastian’s decision as well, having a competitive or not competitive car.

“But in the time away from Formula 1, in my case, we had the pandemic as well. And all the other series, to be honest, they were hit quite badly in terms of sponsors, manufacturers, things like that. And Formula 1 is still quite healthy in that moment. So I felt in that moment the biggest challenge was to come back in Formula 1 and try to do well. So I move always on challenges more than what I think in that moment of my career.”

Based on their current results, Aston Martin looks like a backwards step compared to Alpine. Alonso’s current team won a race last year and are locked in a fight with McLaren for fourth in the championship. Aston Martin are only ninth in the standings.

But that 2020 campaign and Lawrence Stroll’s huge investment demonstrated the seriousness with which Aston Martin are pursuing success. The competitiveness of their Mercedes power unit is not in doubt, while Alonso admitted recently that whatever gains Renault has made with its motor are hard to gauge because Alpine is the only team that uses it.

At Alpine he is up against a team mate who is sharp enough to cause him problems on race day, as yesterday demonstrated. That on its own was certainly not enough to set events in motion, but Alonso will surely view the ease with which Lance Stroll’s team mates have kept him handled and expect to do the same.

Alonso’s decision to up sticks is a blow to Alpine, even if they have highly-rated Formula 2 champion Oscar Piastri waiting in the wings for an overdue promotion to F1. It signals the same loss of faith in their potential that came from Alonso’s predecessor, Daniel Ricciardo, when he announced his planned departure one season into a two-year deal with the team.

“There is not a crystal ball that you can choose,” said Alonso last week of the decision which lay ahead of him at the time. “I guess now with this set of regulations, it seems that Ferrari, Red Bull and Mercedes are the only capable teams of winning races.

“So if you have an opportunity in 2023 on those three teams, you will try to join forces. There is no opportunity so you just need to trust some other projects that they are maybe wishing that they are competitive in next year.”

In the press release issued this morning, Alonso left no one in doubt which of the projects open to him he has most faith in. “This Aston Martin team is clearly applying the energy and commitment to win, and it is therefore one of the most exciting teams in Formula 1 today,” he said. “No one in Formula 1 today is demonstrating a greater vision and absolute commitment to winning, and that makes it a really exciting opportunity for me.”

99 comments on “How did Alpine let its star driver slip through its fingers?”