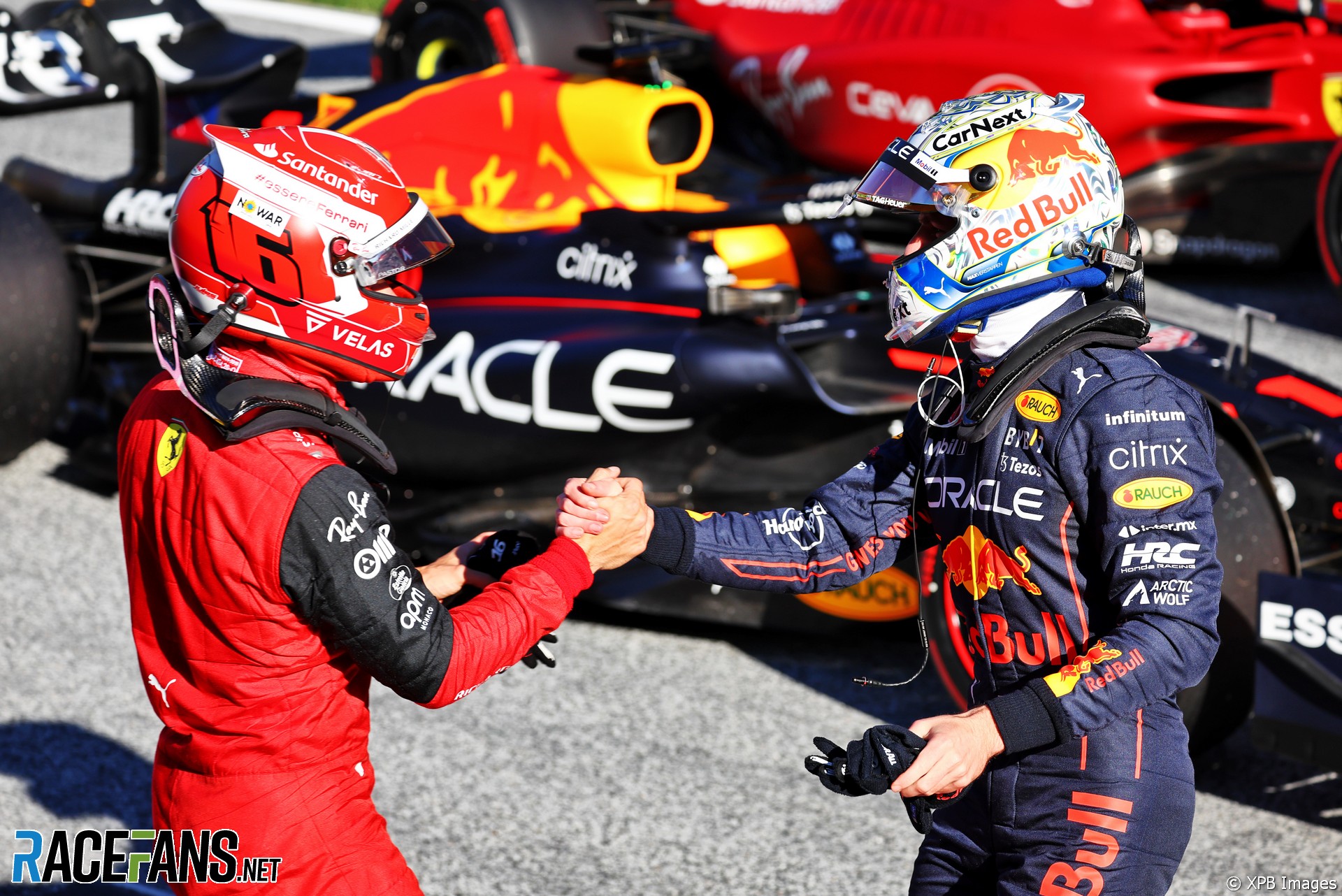 In the round-up: Max Verstappen says he is enjoying his championship fight against Charles Leclerc more than last year’s often bitterly fought contest with Lewis Hamilton.

Asked in an interview for Sky how this year’s title battle compares to last year’s, Verstappen said: “I prefer what we have now.

“Because it’s first of all, Charles, [who] I know very well. He’s a nice guy. We are a similar age, of course, I think we are only three weeks apart.

“And I think also we are fighting a very well-respected competitor in terms of Ferrari. The way they go about, the way we are fighting, when they win the race, we can go to them and say, ‘well done’ and when we win a race, they can say ‘well done’. And I really respect that.”

Verstappen says he also gets on well with long-time Ferrari figures such as Mattia Binotto, the team principal, and Gino Rosato. “Even Mattia, I have a really good relationship with him, and not only Mattia, even Gino running around, we always have a good laugh.”

After AlphaTauri ended the first day of practice for the Hungarian Grand Prix towards the bottom of the times, Pierre Gasly said the team needs to understand why they are struggling for pace around the Hungaroring.

Gasly finished the second practice session in 15th on the times, 1.2 seconds off Leclerc’s best pace, while team mate Yuki Tsunoda was even slower, down in 19th place at the end of running.

“I was actually pretty happy with my lap,” said Gasly. “I managed to put a good lap together in FP2, but in terms of performance, we are not there. So we need to understand.

“It’s not like a massive issue with the car balance, but just in terms of grip we’re sliding too much. We’ll have to see what we can improve for tomorrow to gain some performance and hopefully fight for Q2 here.”

Alice Powell took her first pole position for the 2022 W Series season at the Hungaroring, beating Beitske Visser to secure the top spot on the grid for today’s race.

Powell’s best lap of a 1’42.986 was good enough to put her ahead of Visser by two tenths of a second, with Nerea Marti and Marta Garcia starting behind on the second row.

Extra tracks are coming to the official Formula 1 game F1 22, Codemasters have confirmed. Speaking on The Racing Line, Matthew Skingle revealed extra circuits will soon be coming to the game.

“We will be adding additional tracks to F1 22,” he said. “What they are, I cannot reveal at this moment in time. But what I can say is that they will be free for all players. So as long as you’ve got a copy of F1 22, you can download the additional tracks free of charge.”

Autodromo do Algarve, which F1 visited in the previous two years, and the Shanghai International Circuit which last held a grand prix in 2019, are among the tracks tipped to feature.

TOKYO DRIFT MODE!@12WillPower made an incredible save earlier at the famed @IMS. #INDYCAR pic.twitter.com/VC7JH0eYlY

Great to be back in Hungary! Some good work done today, trying to understand the new aero package – but so far the feeling is good. Rain forecasted tomorrow 🌧 #HaasF1 #F1 pic.twitter.com/yjR7249njn

A pioneer driving increased diversity in motorsport, thank you Lewis for taking the time to come by and speak to our drivers. It was mega! 💪#WSeriesHungary #HungarianGP #F1 pic.twitter.com/gVQnrgRFNz

Interesting development over at @SkySports: the broadcaster is live streaming sport for the first time ever on @TikTok_UK "in order to further engage a new audience of young fans."

Both opening matches of cricket's @TheHundred will air live on the platform.

I’m the happiest girl ever pic.twitter.com/9lIW3jvikX

After 37 years and almost 9,000 episodes, Australian soap opera @Neighbours has come to an end. Back in 2006 Ralf Schumacher and the Toyota @F1 team visited Ramsay Street ahead of that year's #AustralianGP.#F1 pic.twitter.com/GjZZNRPP3w

"Overall, I feel I've got better and better with it, so it's definitely something that I want to keep for sure because it has lots of benefits. The downside is it makes the car more difficult to drive, but I am a racing driver and I need to be able to drive a car that is a bit pushier which I do, but this time, I pushed a bit too much on that lap and I paid the price for it."

F1 strategy: 'People don’t understand how much is going on behind the scenes (Top Gear)

"I think it’s very easy for people to comment on strategy. People don’t understand how much is going on behind the scenes, and how it’s not always as clear-cut as it might appear."

The best bikes of the F1 grid: take a look at what the fastest drivers on earth choose to ride (Road)

"Whether it's ferrying drivers and staff between car park and pit lane, sighting laps before the main event or just heading out for a ride during the off-season to keep their fitness up, F1 riders and staff seem to love their bikes... but what do you ride if you're used to some of the fastest machines on the planet?"

"I think things came together a bit at Paul Ricard, but the speed has always been very, very good. I don’t want to be one of those drivers that says they’re unlucky, but we’ve had lots that’s gone on during a lot of weekends, so it was nice to have a clean weekend there and I don’t see why we can’t continue and have clean weekends for the rest of the year."

"Get to grips with F1 22's updated handling model, find out more about the rising stars from the F1Esports Pro Exhibition, and see how you fare with the hot lap challenge in Hungary."

With Haas’ major upgrades for this weekend drawing cynicism from some that the team’s car is now simply a ‘White Ferrari’, @tifoso1989 believes emulating their race-winning partners is the obvious approach to take…

It’s worth to mention that Alpine were the first to copy Ferrari’s sidepods concept. As for Haas and since they are sourcing as much as the rules permits in terms of non listed parts and with former senior Ferrari personnel in charge of the car’s design, it’s logical for them to go down the Ferrari design route since it proved to be the best interpretation of the 2022 regulations.
Tifoso1989