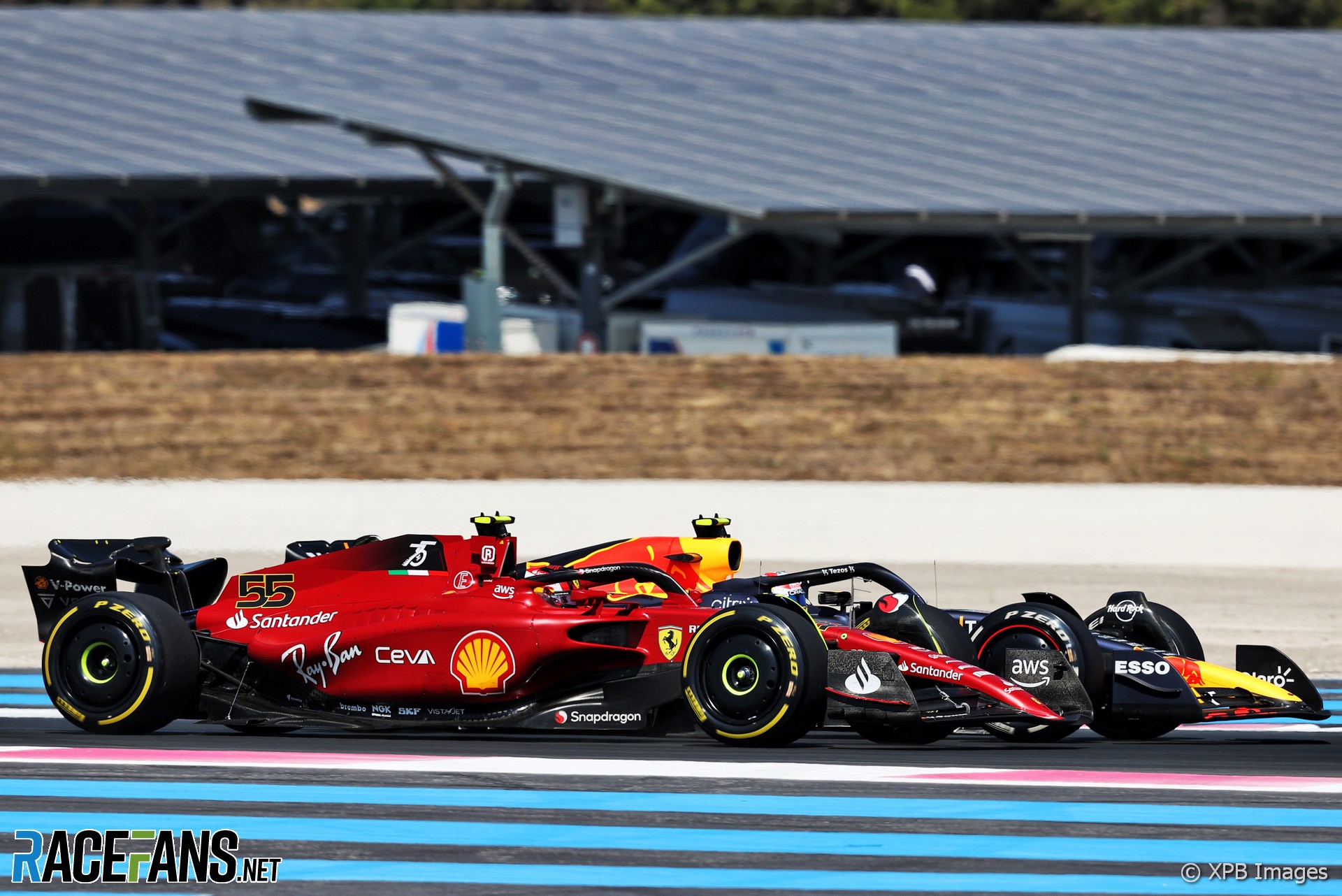 During the live television coverage viewers were played a message in which Sainz refused an instruction from race engineer Riccardo Adami to make his second pit stop. It was broadcast while footage was shown of Sainz overtaking Sergio Perez for third place.

Ferrari pointed out the radio message was not played live, and as a result the lag gave viewers a misleading impression that they had told Sainz to pit while he was overtaking Perez.

“The way the television production feeds the data to the viewers has a delay in it,” said the team’s head of race strategy Inaki Rueda in a video released by the team.

“In this case, you, you saw Perez and Carlos were fighting on lap 41. We were talking to Carlos. We saw that Carlos could not overtake Perez on the back straight and in turn 10 we actually called Carlos in.

“Of course, he was fighting with Perez, he thought he would have him the lap after. And that’s why he decided to [say] ‘please don’t come in, not this lap’.

“Now, you were watching the television live, that call came on the television feed on turn 15, right after the entry, which is nonsensical, because do we call the driver so late he cannot actually react to our call?”

Sainz’s final pit stop dropped him from third on the track to eighth. He was only able to recover to fifth place by the chequered flag, prompting claims Ferrari had made a tactical error.

But Rueda said a second pit stop for Sainz was always going to be necessary as the medium compound tyres he fitted during the Safety Car period were not going to last until the end of the race.

“The life expectancy of the tyre is around 25 laps and that stint after the Safety Car called for a 35-lap stint. So we would have been 10 laps short. In these cases when a driver goes past the life expectation of the type, he has to nurse that tyre, he has to drive very slowly, otherwise he potentially risks having a tyre failure.

“Having a tyre failure is potentially very dangerous because you will for sure end up with a car in the barrier.”

As Sainz had collected a five-second time penalty at his first pit stop, Ferrari saw no value in leaving him out ahead of Sergio Perez and George Russell.

“Even though Carlos still managed to overtake Russell and Perez he was never going to be able to open a five-second gap on them, having to nurse those medium tyres to the end,” he said. “With this in mind, we decided to pit Carlos and make sure that he came back and got an extra point for the fastest lap.”

Sainz’s team mate Charles Leclerc retired early in the race when he crashed at Beausset. He was being pursued by Max Verstappen, who had just made his first pit stop.

Red Bull team principal Christian Horner believes Verstappen would have got ahead of Leclerc and kept him behind when the Ferrari driver made his pit stop. But Ferrari think Leclerc would have been able to gain enough of a tyre advantage to pass his championship rival.

“Charles did an excellent job of keeping Verstappen behind the whole first thing and Verstappen came in and stopped very early. We thought that would be the case, and Charles was ready to ignore Verstappen and concentrate on doing our optimum race. Unfortunately, Charles didn’t finish the race.

“We were quite confident that had it going in another way Charles would have pitted five six laps later and would have had the pace to come back at Verstappen and overtake him for the race win.”