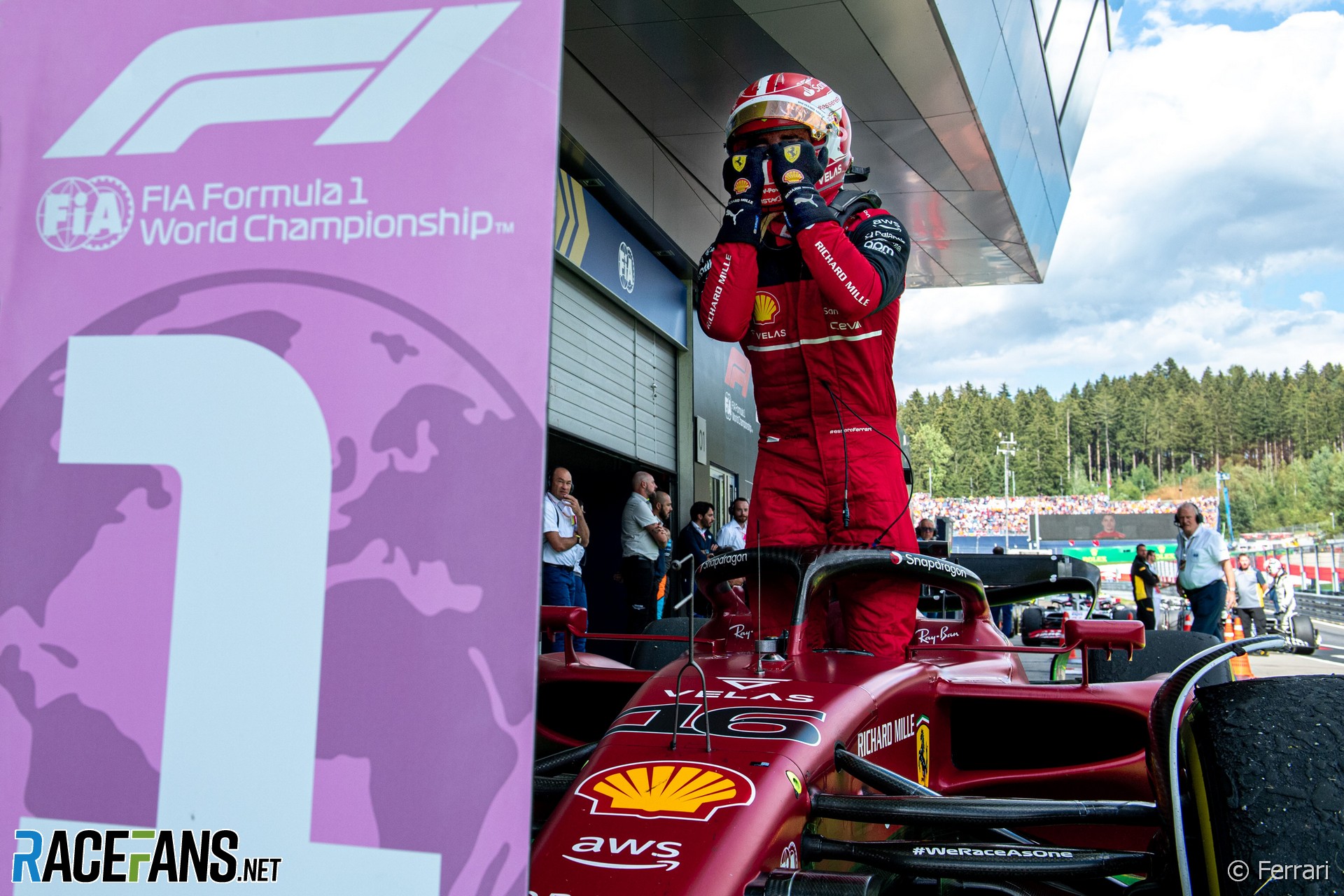 Charles Leclerc scored the fifth grand prix victory of his career in Austria last weekend. If that seems like a surprisingly small total, that may be because he’s also had 15 pole positions.

This is the first time Leclerc has won a race without starting from pole position. It was close, though: Max Verstappen pipped him to pole position on Friday by just 0.029 seconds, and Leclerc chased him home in the sprint race.

Leclerc’s fifth win puts him level with Giuseppe Farina, Clay Regazzoni, John Watson, Michele Alboreto and Keke Rosberg. He took it in the 100th Formula 1 event he has participated in. Leclerc only started in 91 of those event, however: he did four practice sessions each for Haas and Sauber (now Alfa Romeo) as a test driver, and failed to start in Monaco last year when his engine failed.

Esteban Ocon, meanwhile, did start his 100th race, and marked it with his best finish of the season so far, taking fifth.

For the second sprint event running, Max Verstappen set pole position and won Saturday’s race. As of this year, F1 says it is officially designating the the driver who takes pole position in conventional qualifying as the weekend’s pole-winner, notwithstanding the fact that another driver could still start the grand prix from first place. This contradiction hasn’t arisen yet: Will it be third time lucky in Brazil?

Verstappen therefore had his 16th pole position by either metric, which puts him level with two drivers who unlike him never won the world championship: Stirling Moss and Felipe Massa.

When Leclerc passed Verstappen for the lead on the 12th lap, it brought to an end a remarkable run by the Red Bull driver at the head of the field at the team’s home event. Verstappen also led every lap of the sprint race and throughout both of last year’s grands prix at the Red Bull Ring: A total of 176 consecutive laps at the front of the field.

Leclerc delivered Ferrari’s first Austrian Grand Prix victory since Michael Schumacher won in 2003, which was the last F1 race at the track for 11 races. Schumacher experienced a brief fire during a refuelling stop on his way to victory; Leclerc’s team mate Carlos Sainz Jnr had a more serious, race-ending fire in his Ferrari last weekend.

Ferrari, who won the first world championship Austrian Grand Prix in 1964, the only one to take place on the unloved Zeltweg airfield circuit, have now tied McLaren for the most victories in this race, with six. Mercedes have five, plus one at the same venue when it held the Styrian Grand Prix in 2020.

Lewis Hamilton continued his improved run by finishing third for the third race in a row. Three places back, Mick Schumacher improved on his career-best result, one week after reaching the points for the first time at Silverstone. Curiously, Schumacher matched his father’s performance in the first race on this version of the circuit now known as the Red Bull Ring, by starting ninth and finishing sixth.

This was also the second consecutive race in which Haas scored points with both their cars. They last managed this in the final two 2018, when Kevin Magnussen was paired with Romain Grosjean. Having been third in the constructors championship after the first race, Haas fell to ninth two races ago, but are now back up to seventh.

The Austrian Grand Prix marks the halfway point in this year’s championship. As the 2022 F1 calendar now features 22 races, the same as last year, we can directly compare how the teams and drivers are doing compared to the same point last season.

Ferrari are by far the most improved team with 140 points more than at this stage last year. That’s more than twice the gain of any other team.

While Mercedes’ fall from grace has been conspicuous, McLaren have actually suffered a steeper drop in points since this time last year.

Despite a disappointing start to the season for Mercedes by their standards, George Russell has the greatest points gain of any driver compared to last year after joining them from Williams.

Conversely the driver he replaced, Valtteri Bottas, has experienced one of the biggest drops having joined from Alfa Romeo. But that still falls short of Hamilton’s 86-point slump year-on-year.

Have you spotted any other interesting stats and facts from the Austrian Grand Prix? Share them in the comments.