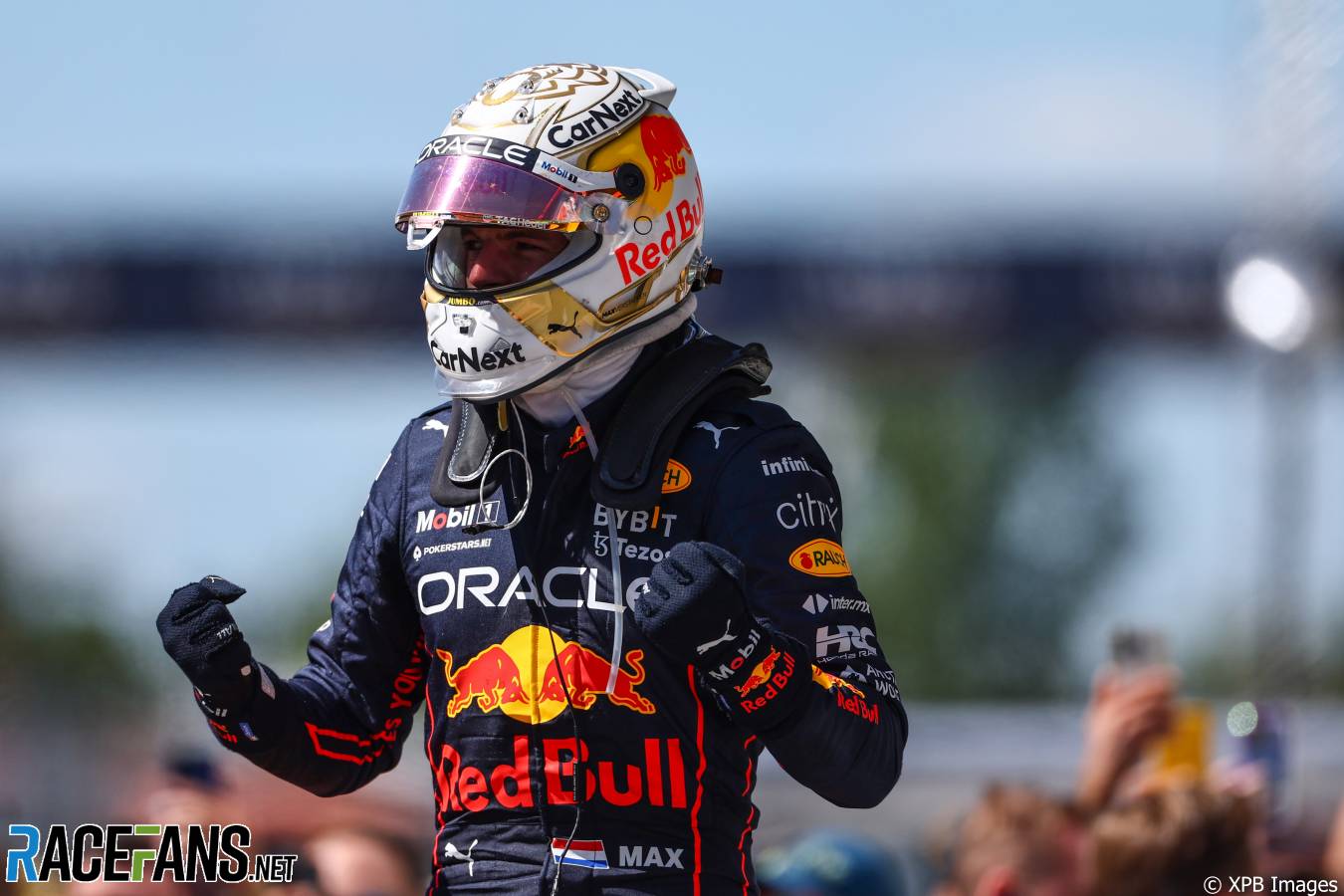 Max Verstappen took another useful step towards winning a second world championship by resisting lap after lap of pressure from Carlos Sainz Jnr to win the Canadian Grand Prix.

On a day when his two closest championship rivals started outside the top 10, Verstappen did everything he needed to maximise his advantage.

Before the race, anticipation was high as to what irrepressible veteran Fernando Alonso might do from his first front row start in a decade. Championship leader and pole-winner Verstappen would surely not risk going wheel-to-wheel with the Alpine driver.

But within moments of the start, that prospect fizzled out. Alonso’s reactions were fractionally slower down the pole winner’s and Verstappen never looked in danger of losing his lead. Carlos Sainz Jnr, from third place, tried to go the long way around Alonso at turn two but had to file in behind the Alpine.

Lewis Hamilton got away well from his best starting position of the season so far, fourth, and soon found himself going wheel-to-wheel with Kevin Magnussen, as the pair had in Spain. Again there was contact but this time the Haas driver was the only one to suffer, incurring slight damage to the right-hand side of his front wing endplate. Esteban Ocon and George Russell both gained places from Mick Schumacher on the first lap, while Daniel Ricciardo maintained ninth place ahead of Zhou Guanyu.

Sainz immediately latched onto Alonso’s tail and it was clear that as soon as DRS was activated the Ferrari driver would pass. Sure enough on lap three he claimed second place. However he was unable to draw away from the Alpine. Sainz complained his front left medium tyre was graining and Alonso remained in his mirrors, continuing to activate DRS, which helped him keep Hamilton at arm’s length.

Meanwhile Charles Leclerc in the other Ferrari was making progress from his starting position on the back row. He took Nicholas Latifi on lap one followed by Pierre Gasly and Lance Stroll over the next two laps. By the fifth tour he had passed the other Aston Martin of Sebastian Vettel and lay 15th. He then picked up two more places as dramas unfolded ahead of him.

Magnussen had fallen to fifth place after being passed by Russell. He now lay ahead of Ocon, who made a clear bid to the race director by complaining about the Haas driver’s front wing damage. In short order Magnussen was shown the black and orange flag, requiring him to pit for a new front wing. “We were forced to pit with the damage we had but it was nothing,” Magnussen complained afterwards, the early pit stop ending his chance of scoring points.

Then on lap eight, one of the Red Bulls slowed. It was Sergio Perez, who had started 13th after crashing in Q2 and had just moved into the points-paying positions by dint of Magnussen’s pit stop. “I lost the engine, man. I’m stuck in gear,” he told race engineer Hugh Bird as his car approached turn eight.

The race director responded by triggering a Virtual Safety Car period. Perez’s car stopped close to a marshal access point, giving an impression it would take little time to recover. However Red Bull knew it was stuck in gear and could therefore bring Verstappen into the pits confident the VSC period wouldn’t suddenly end. Ferrari were nonetheless prepared to bring Sainz in at the same time and told their driver to do the opposite to Verstappen. The Red Bull came in and Sainz stayed out.

Sainz therefore took up the lead ahead of Alonso, Verstappen, Russell, Ocon and Hamilton, the latter having also pitted. Told Hamilton had emerged behind Ocon, Alonso said: “So we know what to do now.” However Ocon proved unable to contain the freshly-tyred Mercedes, and Hamilton soon swept around the outside of him at turn one for fifth place.

Verstappen passed Alonso with similar ease in a DRS zone. With his fresher tyres he began chipping into the five-second gap between him and Sainz at a rate of around three tenths of a second per lap. But before he could catch him, the VSC was triggered again.

Schumacher had dropped back from Ocon and now had Zhou all over his rear wing. On lap 18 Zhou lined him up for a pass heading into turn eight, but the Haas’s Ferrari power unit chose that moment to cry enough and he pulled to a stop at the same spot where Perez had laps earlier.

Sainz had not long since passed the pit lane entrance but fourth-placed Russell arrived just in time to slide into his pit box. A nervy wait followed for Ferrari as Sainz completed his lap at VSC pace, then pitted, successfully rejoining the track before the race went green again. He emerged behind Alonso who had passed up this second opportunity to pit.

When the race resumed, Sainz lost no time passing Alonso and now lay nine-and-a-half seconds behind race leader Verstappen. The Ferrari’s race pace had looked good on Friday and sure enough with 12-lap fresher tyres Sainz cut into Verstappen’s lead, first gradually then more quickly. Verstappen was clearly going to need a fresh set of rubber and when his lap times rose sharply on the 41st tour, Red Bull decided they could wait no longer.

Making his second pit stop without the benefit of a VSC meant Verstappen was almost 11 seconds behind Sainz once he had a clear run at him after taking another set of hard tyres. Before that he had to clear Hamilton’s Mercedes, which he narrowly failed to beat out of the pits. Verstappen only lost three-quarters of a lap behind his 2021 world championship rival, but the fact Mercedes were that close at this stage of the race showed they were in much more competitive shape this weekend than in previous rounds.

Verstappen was significantly quicker than the leading Ferrari at this point but was still at least nine laps from catching him when the race was disrupted for a third time on lap 48. Frustratingly for Red Bull, their junior driver Yuki Tsunoda was the cause, skidding straight on into a barrier at turn one as he rejoined the track after a pit stop.

For Ferrari, the delay until the Safety Car was deployed was interminable. Sainz, still lapping at race pace, was rapidly approaching the pit lane entrance with the crash scene still only covered by yellow flags. The Safety Car was deployed at the last second and Sainz made it in, though afterwards Ferrari team principal Mattia Binotto was quick to draw attention to his latest dissatisfaction with the race director.

Once all (and, for that matter, any) lapped cars were moved out of the way, the race resumed with 17 laps to go. Verstappen had the lead but Sainz behind him had tyres that were six laps fresher. And when he kept within the vital DRS activation window within the opening two laps of the restart, it seemed we had a fight to the end on our hands.

It never quite materialised, however. Time and again Sainz popped open his DRS flap and closed in, but never came close enough to prompt Verstappen to defend. For all the effort that has gone into making this year’s cars better suited to racing, this was a disappointing outcome.

Verstappen’s defence of the lead was not aided by his radio failing in his last stint. Although he was still able to receive updates from race engineer Gianpiero Lambiase, the Red Bull pit wall could not hear their man.

“I have no clue when it stopped,” he said afterwards. “But at one point GP told me that it was not working anymore. I think the in-lap, after the line.

“I guess it must have been working before or maybe it already didn’t work before, which probably they don’t mind! As long as I can hear him, that’s the most important.”

Nonetheless he weathered lap after lap of pressure from his rival. It was released on the final tour, when Sainz made a small error and dropped out of DRS range. With that, Verstappen had put a lock on his sixth win of the year.

The Mercedes drivers followed them home in morale-boosting third and fourth places. Hamilton was elated to return to the podium for the first time since the season-opener and Russell was surprised at the relative ease with which he kept the recovering Leclerc behind.

The second Ferrari arrived in fifth place after passing the two Alpines following the restart. He sprang a late move down the inside of Alonso at the hairpin, his rival struggling with an engine problem.

A race which had promised so much for Alonso ended on a sour note. Having argued unsuccessfully with his team to be allowed back in front of Ocon, Alonso resorted to some extreme defensive moves in an effort to keep Valtteri Bottas behind which earned the censure of the stewards. A five-second time penalty dropped him from seventh place to ninth, promoting Bottas and team mate Zhou.

Stroll took the final point at home, having been allowed past team mate Vettel so he could successfully attack Ricciardo. That capped a miserable race for McLaren, who lost significant amounts of time for both drivers when they pitted the pair simultaneously during the second VSC period.

While Sainz’s wait for a first win continues, Verstappen’s pursuit of a second championship looks more credible with every passing race. Having delivered his team’s sixth victory in a row, a championship which began as a Ferrari resurgence is in danger of morphing into a Red Bull rout.