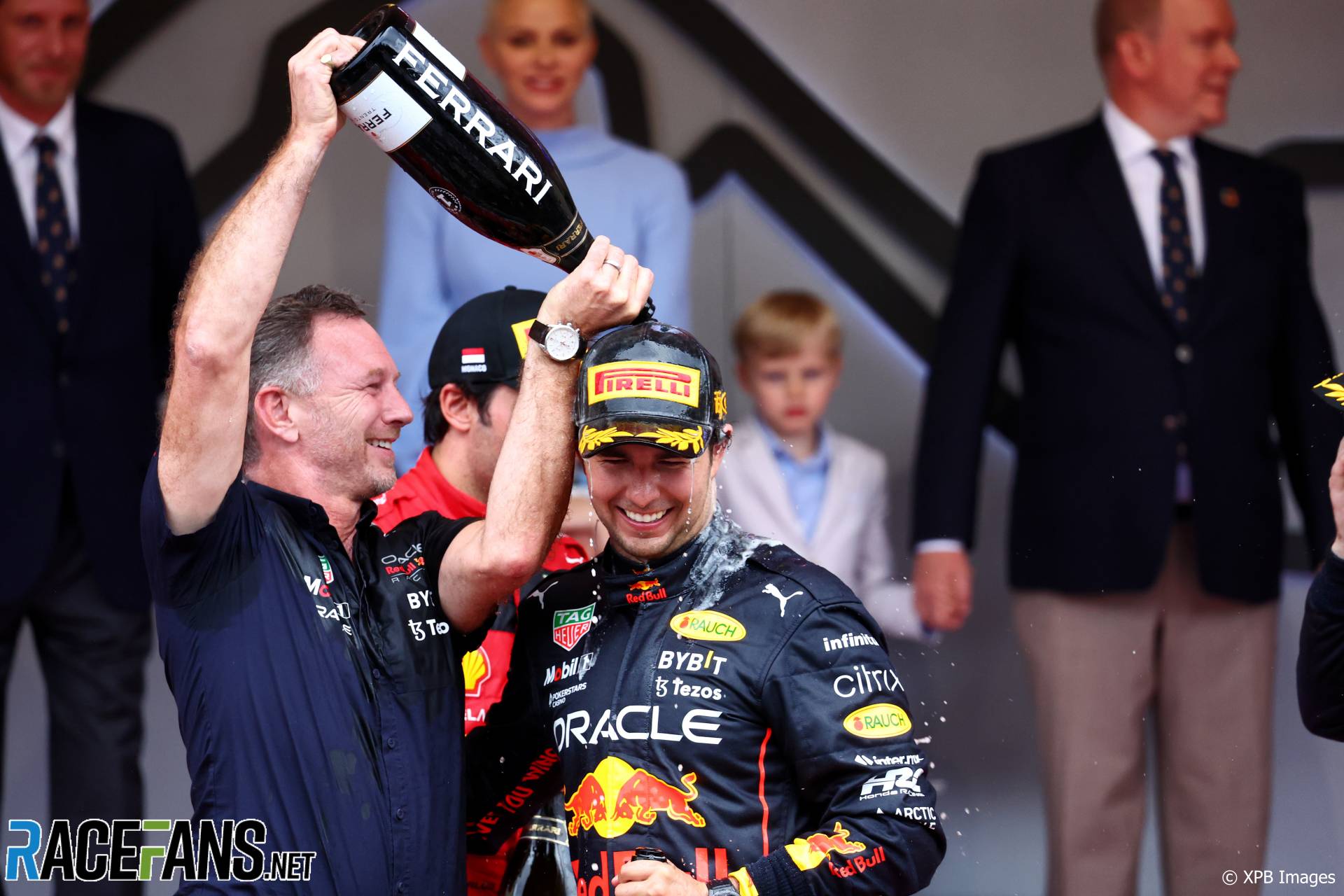 In the round-up: Christian Horner believes Sergio Perez’s Monaco Grand Prix win “is not a one-off” for the Red Bull driver.

Perez “in the form of his career” with Monaco win

“Checo’s in the form of his career is he’s doing a great job and it’s not a one off. I mean, we saw his pole position in Jeddah and he’s really hitting a rich vein of form so that that’s fantastic for us.”

Perez had to let Verstappen past twice during the previous race in Spain. However Horner said both will have the same opportunity to win the championship.

“It doesn’t matter to us which of the two is the world champion,” he said. “Of course the constructors is enormously important, but whether it’s Max or Checo they’re both Red Bull drivers, they’ve both got the same chance.”

Ricciardo helmet message “not directed at anyone”

Daniel Ricciardo gave his explanation for the appearance of the initials ‘FEA’ on his helmet during the Monaco Grand Prix, which was widely interpreted as standing for “fuck ’em all”.

“You have some things and I like to use acronyms just to pump me up. It’s honestly not directed at anyone. It’s just something that I’ve said for a few years and it just kind of gets me in my happy place.

“As well as a driver, you like you put the helmet on and that’s also very significant of like flipping the switch. So it’s one of the last things I’ll see when I put the helmet on, then it just kind of reminds me to to kind of channel in and get into the zone.”

Formula 2 championship leader Felipe Drugovich was bemused to find the pit exit blocked during yesterday race by marshals pulling Amaury Cordeel’s stranded car into it. Drugovich’s pursuers were forced to stop at the end of the pit lane on their out-lap after pitting during a Safety Car period prompted by Cordeel’s retirement.

“It looked quite weird,” Drugovich said. “I didn’t know they could do that, but it is what it is. They at least they they put some yellow flags so I could see that properly and wasn’t an issue.”

Drugovich went on to win the race despite the delay. “I was just worried some of the guys were on track, so we would have lost the position. But apparently everyone just boxed under Safety Car so it was fine for us.”

Several people (including me) almost got flattened by some Red Bull guys bringing a stack of four new tyres down the grid. Pretty chaotic. The rain is getting heavier too

I for one love watching the top four drivers covered by barely two seconds lapping an impossibly narrow circuit at speeds I don't get anywhere near on a motorway, even if I don't think anyone will make a pass. I hope #F1 never drops the #MonacoGP.

Top level media catering in Monaco. The crusty ham baguettes have gone in 60 seconds. And the drinks 'selection'… pic.twitter.com/1pKizPeQA0

Well that was two big hits. Sorry to the team as we were running well and had a great car. Thank you to the AMR safety team and infield medical team for looking after me. Have a little issue with my hand but hopefully all fixable👍🏼 thank you all for the support ❤️

Pretty crazy day out there! Kept getting shuffled to the back with bad pit/caution timing… was feelin’ pretty bleak there for a bit 😬. Good stops, good restarts, and good pace in the car for the 2nd half helped us haul it up to P12 in the end. Thanks to @AJFoytRacing 🇺🇸👍

Romain Grosjean says he had 'no warning' and 'no idea why' his car lost control. All three accidents have come at turn two, where there have been wind gusts for most of the day.#Indy500

Nikola Tsolov dominated again in the third and final Spanish Formula 4 race of the weekend at Jerez as he moved into the championship lead. The Alpine Academy affiliate and protege of Fernando Alonso once more retained the lead on the opening lap which, unlike in the previous two races, ran without the need for the safety car.

In 2021, the race track welcomed nearly 135,000 fans in person. A crowd gigantic in size for Covid-19 times, but it was still only about 40% of IMS' full capacity. Last year, masks were required when not eating or drinking, but few appeared to follow the rules.

After Carlos Sainz switched straight from full wets to slicks, Tifoso1989 says he deserves credit for making the call:

It’s not the first time that Carlos Sainz has questioned the strategy made by his pit wall. He did the exact same thing last in Hungary if I’m not wrong. He was running strongly with good pace and no tyre degradation and the team told him to pit. He opted to stay out and extend his stint which proved to be the right thing to do. The one-stop strategy of full wet to slick was the best strategy today. Though Ferrari pit panicked and it was badly executed as a result.

The thing is Perez pitted for inters because Gasly who have had the luxury to gamble on them because he has nothing to lose has already gave an indication how fast he can go. He overtook Ricciardo in the swimming pool with brilliant traction. Ferrari did have two options; commit to a one-stop strategy as suggested by both drivers and switch only for slicks or just follow the trend and switch to inters. The risk was Sainz who didn’t have enough margin to the Red Bulls could have his race compromised.

The thing is Leclerc with 5s advantage before the pit stops could have made both strategy work if Ferrari have committed to one of those options. Instead, they didn’t commit to anything, panicked and executed both stops badly. He could have covered Perez a lap after he stopped but they were napping and when it was too late they switched him on inters. Unbelievable!
@tifoso1989

Get the best of our motorsport coverage after every F1 race in your inbox – sign up for the free RaceFans email Newsletter: