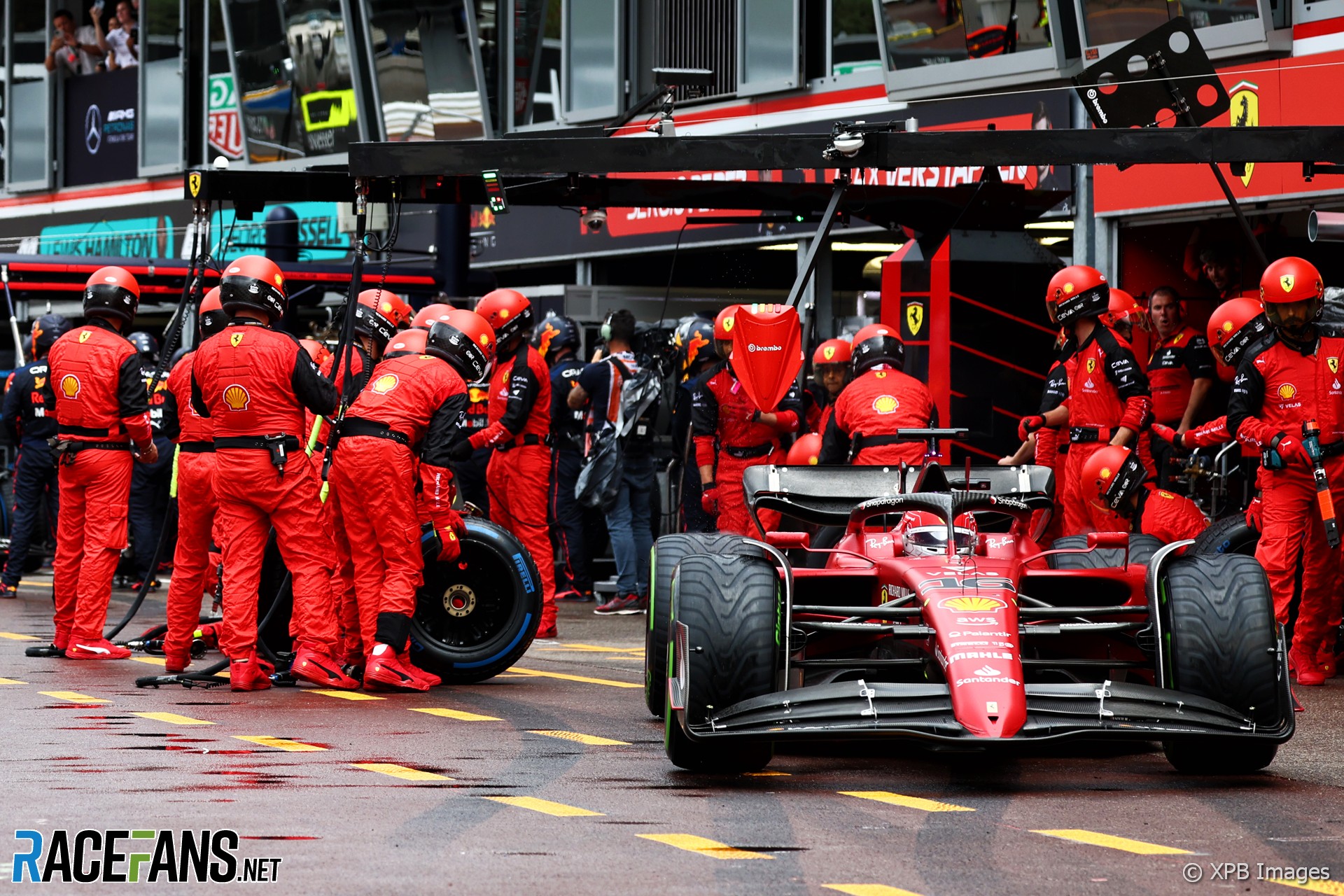 Charles Leclerc said Ferrari made multiple mistakes with its strategy in the rain-affected Monaco Grand Prix, starting with his first pit stop.

Having led the early stages of the race, Leclerc slipped to fourth place at the finish.

His day began to go awry as the track started to dry and Ferrari brought him in to fit intermediate tyres. The team was reacting to Sergio Perez, who had pitted two laps earlier to switch from full wets to intermediates and was immediately quicker.

Leclerc’s race engineer Xavier Marcos Padros had already suggested the possibility of waiting for the track to dry more fully and going straight from full wets to slicks. However after Leclerc was told Perez had switched to intermediates he drove a full lap then told his team: “Inter would be much quicker, for sure.”

Later on that lap, as Leclerc exited the chicane, Marcos Padros told him to pit. Leclerc did not question the decision, and Ferrari put him on intermediates.

Meanwhile, his team mate Carlos Sainz Jnr was having the same conversation with his race engineer. However, Sainz was doubtful that switching to intermediates was the correct decision, and less easily persuaded of the need to react to Perez’s pit stop.

Told Perez had pitted for intermediates, Sainz replied: “I’m not sure it’s the right call. It’s nearly ready for dry.”

“We would like to cover Checo on our side,” his race engineer Ricardo Adami told him. “I don’t think it’s the right thing to do,” Sainz asserted. “In five, six laps, it might be dry.”

Nonetheless, Ferrari did call Sainz into the pits, only to cancel the instruction. Leclerc came in shortly afterwards, but lost his position to Perez.

Leclerc’s troubles worsened from that point onwards. He lost more time in traffic and again having to queue in the pits behind his team mate when they eventually pitted for slicks. However, he stressed the original decision to change to intermediates had been “very wrong”.

Team principal Mattia Binotto said Ferrari was prepared to skip the intermediates and switch straight from wets to slicks if necessary, as Sainz eventually did. Lewis Hamilton had used that strategy to win the same race in 2016, Binotto pointed out.

“It was a scenario we were discussing between us before the race,” he said. “It already happened in the past – I think it was Hamilton here in Monaco – from extreme [wet] switching directly to dry.

“So it’s something which we were aware of and was part of the discussion we had and the judgement which would have been necessary during the race.”

He said the team rely on the drivers’ feedback to decide which tyre type to fit. “The drivers call in that respect – because they’ve got the feeling of the tyres and the track, how much it is wet and the grip they’ve got – was essential.”

Sainz said it was a “huge challenge” to discuss the tyre strategy while navigating the narrow Monaco circuit in treacherous conditions. “But the important thing is that by the time that everyone started pitting for inters, and they were telling me that everyone on inters was very quick, for me we were not very far off from slicks.

“So it was worth – not taking a gamble, because it was not a gamble, it’s Monaco and it’s still difficult to pass – but to make sure that we waited until the slick to pit and we save a pit stop. I was trying to transmit to the team that was my feeling, that this was my intention or at least what I thought was the right call.”

Sainz said he worked out Perez was not catching him quickly enough to threaten his position. “I could calculate more or less the rate that Perez was catching and I figured out that by the time he was going to catch me, it was going to be time to put the slicks.”

However Sainz later lost time behind Nicholas Latifi, and fell behind Perez when he pitted.

Leclerc, however, said he didn’t realise Ferrari were going to put him on intermediate tyres when he made his first pit stop.

“I was not aware that we were pitting for intermediates,” he said. “We didn’t have the time to speak about it.

“Obviously I got the call and I listened to it. So we didn’t have the time to discuss because it was at a particular moment and I think the aim was to react to Perez.

“But we’ll analyse all of this. Obviously it’s disappointing and it hurts especially at home, but it’s the way it is.”

Before Perez pitted, Leclerc and his race engineer were already considering a switch directly to slicks:

However when Leclerc was told Perez had pitted, he said putting intermediates on could be advantageous. There was no further discussion of slicks from either side before he pitted:

Sainz responded to the news of Perez’s pit stop differently, casting doubt on whether the team should fit intermediates:

Despite Sainz repeatedly casting doubt on whether they should fit intermediates, Ferrari initially called him in for a pit stop, then changed their minds. Leclerc came in instead:

Sainz made it clear he wanted to stay out until the track was ready for slicks, which he did:

21 comments on ““Inter would be much quicker”: Why Leclerc made the “very wrong” pit stop Sainz avoided”