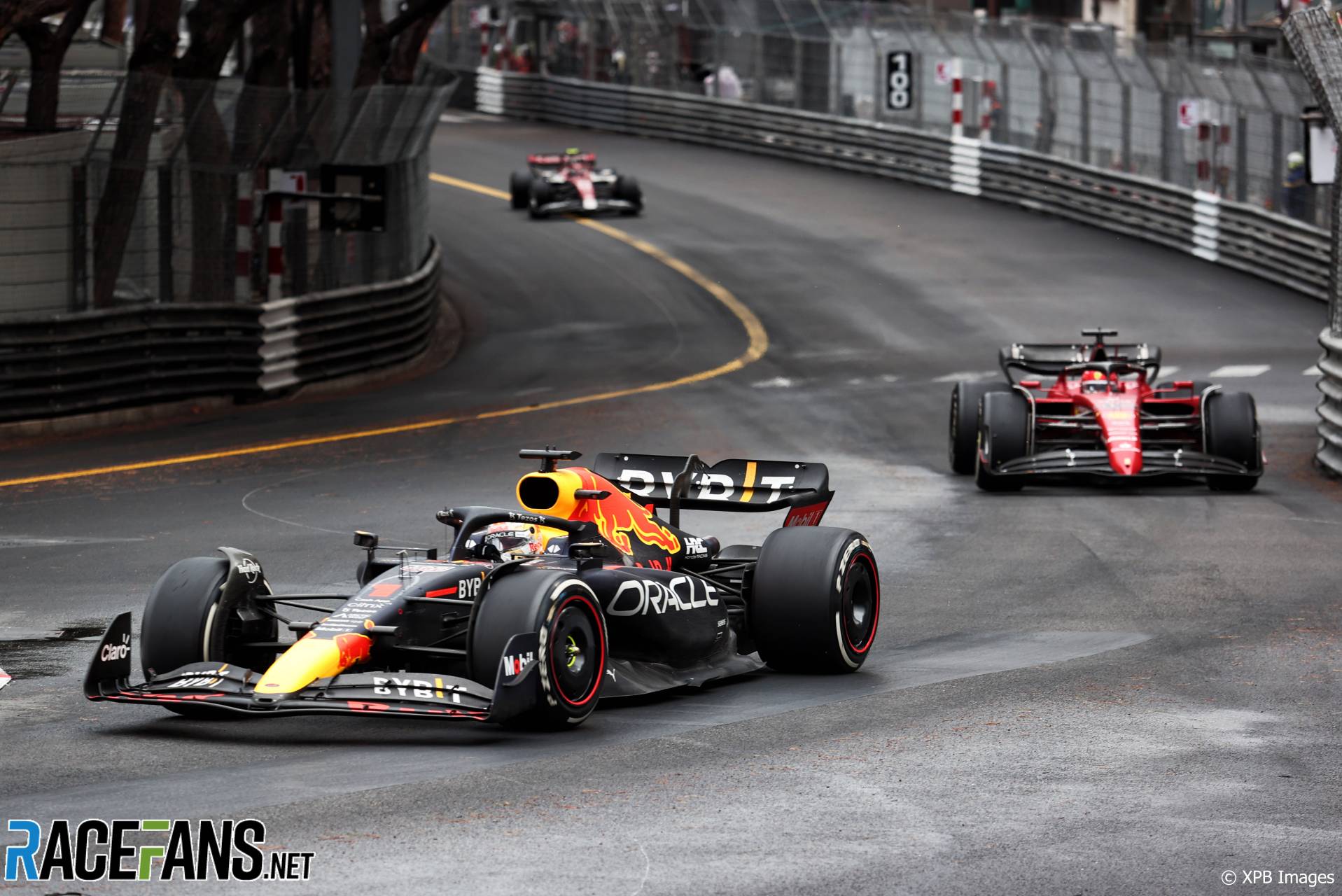 Ferrari were unsuccessful in their protest against the two Red Bull drivers over alleged pit lane exit violations during the Monaco Grand Prix.

The stakes were high in the case before the stewards. Red Bull had won the race with Sergio Perez and his team mate Max Verstappen had finished third.

The stewards took over four-and-a-half hours to publish their verdicts, which rejected Ferrari’s protest on both counts. However, Verstappen had come closer to breaking the rule than his team mate.

The matter centred on whether the drivers had crossed the line at the pit lane exit as they rejoined the track. This is a long-established rule which periodically gets broken and Ferrari were able to cite a recent example of a driver being penalised for doing so: Yuki Tsunoda in Austria last year.

After scrutinising footage of the two incidents, it became clear Perez had touched the line with his tyre, but had not strayed beyond it to the asphalt beyond.

Verstappen’s situation was different. As viewers on the television feed saw from his onboard camera during the race, part of his front-left tyre did go beyond the line. The same was true of his rear-left.

At a hearing attended by Ferrari and Red Bull, “all parties agreed that car one [Verstappen] did have part of its front left and rear left tyre on the left side of the yellow line,” the stewards noted.

However the tyre did not fully cross the line. “All parties agreed that most of the left front and left rear tyres of that car remained on the yellow line,” added the stewards.

Had Verstappen committed the same infringement in last year’s race, he might have found himself in trouble. At that time, article five of chapter four of Appendix L of the International Sporting Code stated:

“Except in cases of force majeure (accepted as such by the stewards), any line painted on the track at the pit exit for the purpose of separating cars leaving the pits from those on the track must not be crossed by any part of a car leaving the pits.” (Emphasis added.)

However, this section of the rules has been revised since then. The rule now refers to a tyre ‘crossing’ the line, rather than any part of a car. The relevant rule, article 5 (c) of the same chapter, now states:

“Except in cases of force majeure (accepted as such by the stewards), any tyre of a car exiting the pit lane must not cross any line painted on the track at the pit exit for the purpose of separating cars leaving the pit lane from those on the track.” (Emphasis added.)

Because only part of Verstappen’s tyre crossed the line, and not the complete tyre, he was deemed to have obeyed the rules. “In this case, the car did not ‘cross’ the line,” ruled the stewards, “to do so it would have needed to have a full wheel to the left of the yellow line.”

FIA Formula 1 race director Eduardo Freitas admitted this change to the ISC had not been reflected in the pre-race Event Notes issued to teams ahead of the Monaco race. “The race director stated that… the notes were a ‘cut and paste’ from the 2021 version of the Notes and hence had not been changed to reflect the 2022 Appendix L changes,” the stewards explained.

Ferrari called attention to the event notes in their protest. However, the stewards noted, it is the ISC which carries force. “Article 2.1 of the 2022 Formula One Sporting Regulations provides that ‘All… officials… undertake to observe all the provisions of … the Code, …the Formula 1 Sporting Regulations…'” they pointed out.

When asked by RaceFans why they had brought the protest, Ferrari team principal Mattia Binotto said the team were “seeking clarification on a matter which for us is obvious and clear.”

“In the past it has always been penalised with a five-second penalty,” he added. “It’s clearly written that, since Turkey 2020… that you need to stay on the right of the yellow line.”

The ruling of the stewards has clarified the matter, though Ferrari were surely also hoping the five-second penalty would be applied to Verstappen. That would have cut the gap between him and Leclerc in the championship from nine points to three, and gone some way towards recovering the points squandered by their tactical blunder in today’s race.