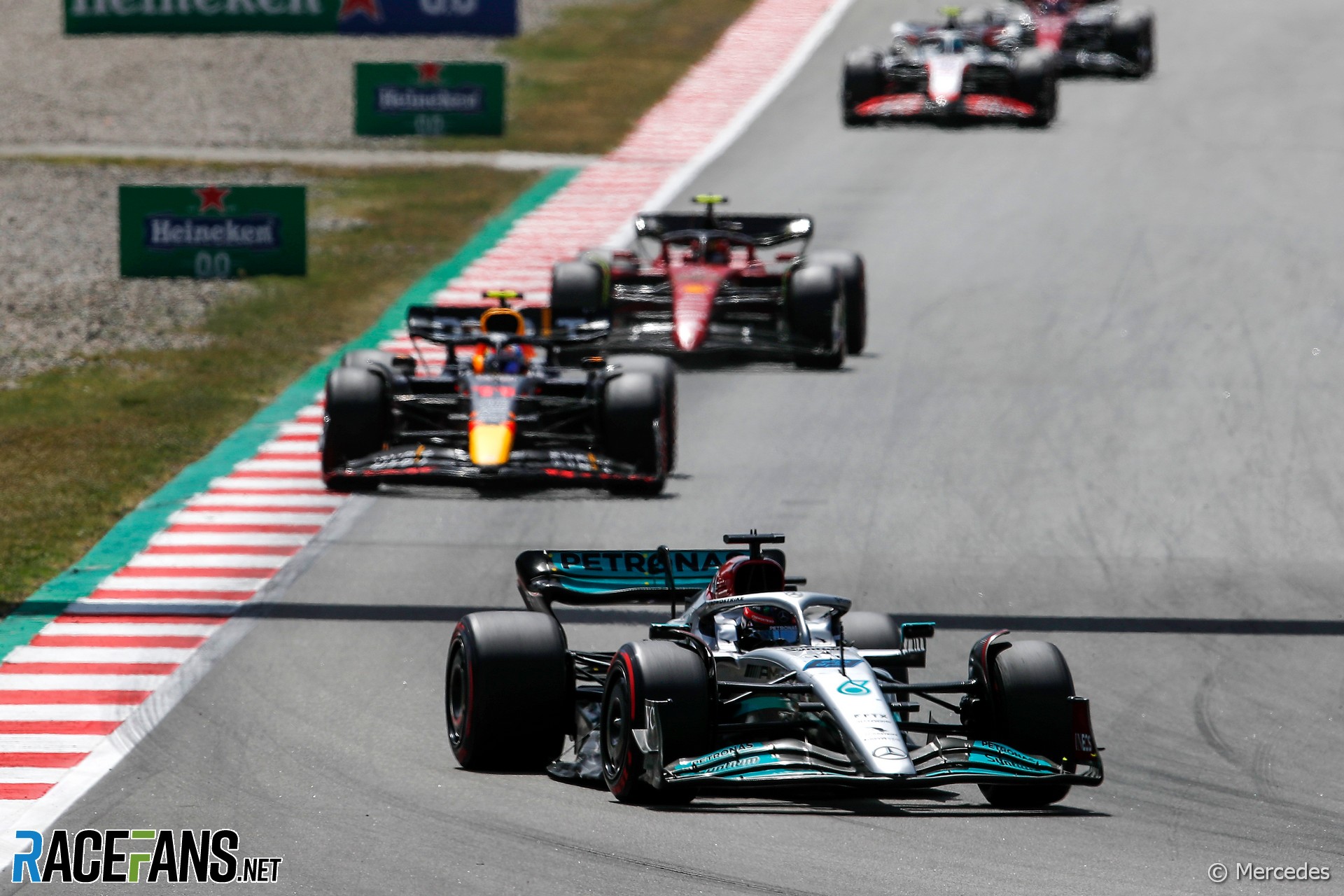 The Spanish Grand Prix was undoubtedly the strongest showing of the season so far from Mercedes.

George Russell and Lewis Hamilton came in third and fifth respectively at the Circuit de Catalunya. Can they get involved in the fight between Red Bull and Ferrari again in Monaco – a track where passing is notoriously difficult?

Are Mercedes truly back in the fight?

When Russell joined seven-time world champion Hamilton at Mercedes, few would have predicted that Russell would finish ahead of Hamilton in five consecutive races from their first six starts together. But with an impressive drive to third last weekend, that is exactly what Russell has achieved – albeit with some fortunate Safety Car interventions along the way.

Russell’s battle against the Red Bulls and ability to out-qualify and out-race the Ferrari of Carlos Sainz Jnr may have been promising enough for Mercedes’ heavily upgraded W13 in Barcelona, but Hamilton’s race pace during his recovery from 19th at the end of the opening lap will have done wonders for morale back in Brackley. Only a late water leak stopped Hamilton from crossing the line one place behind his team mate in fourth.

While Mercedes’ gains may not be enough to immediately propel them back into contention for race victories just yet, they may mark an important first step towards them playing a much larger part in the action at the front of the field. If Russell and Hamilton can be in the mix with Ferrari and Red Bull this weekend, then Mercedes may have truly turned a corner with their new upgrade package.

Max Verstappen winning the Spanish Grand Prix was not too much of a surprise, given that he had already claimed three victories earlier in the season. But what was noteworthy was the nature in which he had achieved it.

Despite Verstappen having shown he had the pace to win, Red Bull’s decision to tell his team mate Sergio Perez to let Verstappen through into the lead only six rounds into the season seemed like a clear indication of Perez’s perceived status within his team.

When Perez joined Red Bull last year and struggled to get to grips with the RB17 and match his team mate’s world championship contending form, he was willing to accept a support role to Verstappen in the belief he would naturally compete far closer to him when the new technical regulations for the 2022 season came into effect.

So far this year, Perez has proven to be more of a match for Verstappen in the RB18, with one pole position and three second places to put him on 85 points compared to his team mate’s 110 from the first six rounds. However, the team orders in the Spanish Grand Prix went a long way to suggesting that Perez does not enjoy equal favour in the Red Bull garage.

Beyond Perez being instructed to move aside and allow Verstappen through not once but twice in Barcelona, Red Bull’s unfulfilled pledge to return the first favour was a clear indication of the privileged position Verstappen holds.

While none of this can be overly surprising, given that Verstappen is the reigning world champion and has claimed four victories from six races in 2022, it does beg the question of whether Perez will have the opportunity to ever fight against his team mate should the pair both end up in contention for a race win this year.

Over the first five rounds of the season, Leclerc had not wanted for good fortune. Not that he had not earned his two wins and multiple pole positions on the track – far from it – but he had benefited from total reliability from his Ferrari on Sundays while Verstappen had twice failed to reach the chequered flag due to fuel system problems.

That changed last weekend when Leclerc’s power unit suddenly let him down half way through what was looking like a comfortable drive to victory in the Spanish Grand Prix, ending his race on the spot and ultimately costing him the lead in the drivers’ championship.

Leclerc will therefore be hoping that this stroke of bad luck will mean he will finally be able to enjoy his home grand prix without something going disastrously wrong during the race weekend. From three previous races in his native Monte Carlo in Formula 1, Leclerc has failed to finish on every occasion – not even able to start from the pole position he had claimed last season.

What should give Ferrari confidence is how strong they looked through the tight, twisty final sector in Barcelona compared to their rivals. As there are no circuits on the calendar close to being as tight and twisty as Monaco, perhaps this could the venue where Ferrari breaks Verstappen’s current streak of victories.

Bring on the bumps

As the most famous street circuit in motorsport, Monaco has everything that makes a street circuit so challenging. Tight corners, low grip, close barriers and a bumpy, uneven track surface.

With the introduction of new ground effect cars for 2022 meaning that teams want to run ride heights as low as possible to maximise the downforce they generate, many drivers, such as McLaren’s Daniel Ricciardo, expect to be in for an uncomfortable 78 laps around Monte Carlo.

“I think Monaco is going to really test this era of cars and it might expose some things with them,” said Ricciardo.

“It’s not like they’re going to be undriveable or anything – I don’t predict anything like that. But whether it’s visibility or just kind of the low ride heights, the stiffness over kerbing, bumps, just maybe simply like a more uncomfortable lap. I think it’ll be a challenge.”

The problem of drivers getting in each other’s way during practice and qualifying session has got worse in recent years. In Barcelona abnormally high temperatures caused the soft tyres to overheat to such an extent that drivers complained that they were losing grip in the middle of their qualifying push laps. Circumstances like this mean it’s more advantageous than ever to tiptoe slowly around an out-lap, leading to plenty of traffic headaches for teams to somehow contend with.

One solution imposed by the FIA has been to introduce maximum out-lap time limits in an attempt to force drivers to not go too slowly before their push laps and avoid the kind of final sector traffic jams that caught out Fernando Alonso in Q1 last weekend. However, even with the time limit, the Spanish Grand Prix stewards recorded 55 instances of the maximum lap time being breached by 18 of the 20 drivers in the field.

While they did not choose to penalise any of the drivers in breach of the rules in Spain, the stewards did warn teams that “further violations may incur increased penalties – not only for these drivers but for any competitor committing a similar breach in the future.”

But it is one thing to say that the rules are going to be applied more stringently in future and quite another thing to act on that – especially when the panel of stewards rotates with every grand prix. With Monaco being the biggest blackspot on the calendar for traffic due to its naturally claustrophobic layout and minimal space to clear a path for those coming up behind, there’s a real risk that multiple drivers could end up falling foul of the new emphasis on punishing those who are deemed to be driving “unnecessarily slowly” during the most important qualifying hour of the season.

Are you going to the Monaco Grand Prix?

If you’re heading to Monaco for this weekend’s race, we want to hear from you:

Who do you think will be the team to beat in the Monaco Grand Prix? Have your say below.

64 comments on “Are Mercedes back in the fight? Five talking points for the 2022 Monaco Grand Prix”