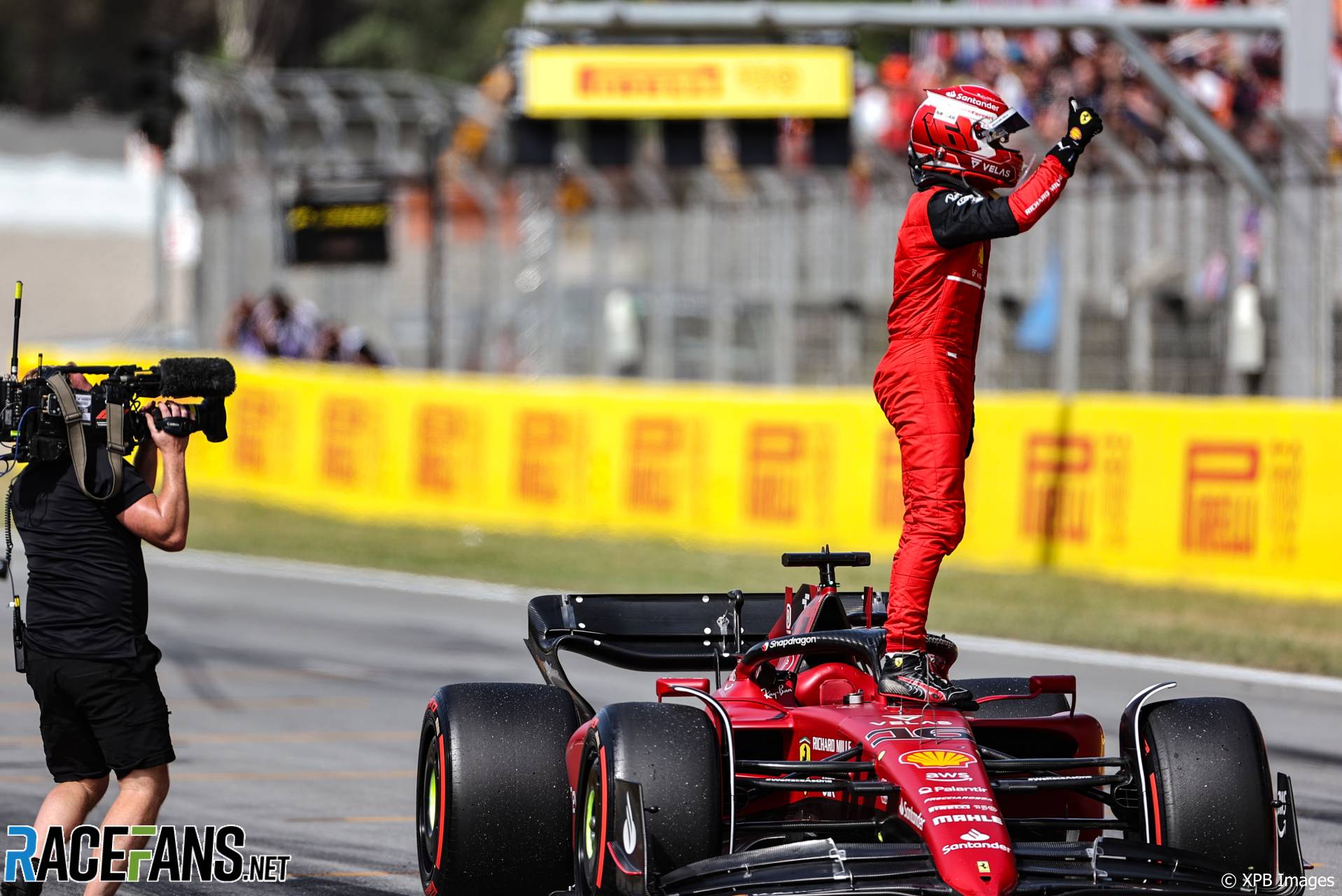 Charles Leclerc claimed pole position for the Spanish Grand Prix at the chequered flag after spinning on his first attempt in Q3.

The Ferrari driver claimed his second consecutive pole ahead of championship rival Max Verstappen, after the Red Bull driver lost power in his car on his final flying lap.

Carlos Sainz Jnr took third on the grid, ahead of the Mercedes of George Russell and Sergio Perez in fifth. Lewis Hamilton will start tomorrow’s race from sixth position.

Track temperatures were approaching 50C under the baking hot Spanish sun when the pit lane opened for the first phase of qualifying in Barcelona. Zhou Guanyu was the first to venture onto the circuit, with Pierre Gasly also taking to the track after car problems limited his running in third practice.

Lando Norris had to take avoiding action on his way out of the pits when Lance Stroll’s Aston Martin appeared to be released directly in front of the McLaren. The stewards will investigate the incident after the race.

The two Red Bulls of Sergio Perez and Max Verstappen were the first of the front runners to take to the track, with the world champion’s first effort over three tenths faster than his team mate. They were then usurped by the Ferraris of Charles Leclerc and Carlos Sainz Jnr, who moved to the top of the times.

Nearing the end of the session, Mick Schumacher was sitting in the drop zone in 18th, but managed to improve on his next lap to jump into the top ten, with Gasly also improving to move out of the drop zone. That left the Alpines of Esteban Ocon and Fernando Alonso under threat, but Alonso caught traffic at the chicane on his out-lap, getting stuck behind Norris who was about to start a lap. Alonso abandoned the run, which would mean he was eliminated from the very first session.

Also knocked out were Sebastian Vettel in 16th, ahead of Alonso and Aston Martin team mate Lance Stroll in 18th. The two Williams of Alex Albon and Nicholas Latifi were the last drivers eliminated, occupying the back row of the grid in 19th and 20th.

It was a slow start to the second session of qualifying with teams seemingly reluctant to take to the track in the early minutes. With the need to save fresh tyre sets for Q3 and the race so important, the two Ferraris of Leclerc and Sainz and the Red Bull of Verstappen all took to the track on a used set of softs for their first runs.

With new tyres on their cars, the Mercedes of George Russell and Lewis Hamilton went quickest overall, with Russell three tenths faster than his team mate. Sergio Perez took third place on new softs, ahead of Leclerc and Valtteri Bottas also on new sets of tyres.

As the track fell silent while teams prepared for their second runs, Daniel Ricciardo sat in the drop zone along with Ocon, Zhou and the two AlphaTauris of Yuki Tsunoda and Pierre Gasly. Everyone then took to the track, bar the two Mercedes and Leclerc, who opted to remain in the garage and preserve tyres.

Sainz was the first contender to cross the line, going fastest of all on a 1’19.453. Tsunoda and Ocon both improved, but not by enough to get them into the top ten. Ricciardo and Norris both found time in their McLarens, knocking Mick Schumacher out in 11th.

But then, Norris was suddenly back in the drop zone after his best lap time was deleted by race director Eduardo Freitas for narrowly exceeding track limits on the exit of turn 12. That allowed Schumacher through to Q3 for the first time in his career and ended Norris’s qualifying.

Esteban Ocon was knocked out of the session in 12th, ahead of the two AlphaTauris of Tsunoda and Gasly. Zhou was the last driver out in 15th place.

It appeared to be the most open Q3 of the season so far with Ferrari, Red Bull and Mercedes all potentially in the mix for pole position. The two Haas were the first cars out on the circuit, but Hamilton was the first big name to start his opening flying lap of the session.

Hamilton’s 1’19.664 was beaten by team mate Russell, then by Perez and Sainz. Leclerc went purple in the middle sector, but spun at the chicane in the final sector, ruining that first effort and left him with only one lap available for him to secure a decent starting position for Sunday’s race.

Verstappen took advantage of Leclerc’s error to take provisional pole, three-and-a-half tenths ahead of Sainz in second and team mate Perez in third. All ten cars returned to the pits until three-and-a-half minutes remaining, when Leclerc ventured out onto the circuit first to attempt what would be his only lap of the session.

Leclerc’s first sector was only fractions slower than Verstappen’s pole time, but his middle sector was almost a quarter-of-a-second quicker. The Ferrari driver crossed the line to set a 1’18.750 to beat Verstappen by over three tenths of a second while, behind him, team mate Sainz improved on his time but not by enough to move from his third place.

Verstappen’s final effort was ruined when he reported having “no power” from his car down the main straight, backing off from his final lap midway through the long turn three and leaving him unable to improve on his time. With neither Russell, Perez or Hamilton able to get close to Leclerc’s time, the Ferrari driver secured pole position – his second in a row after taking pole in Miami.

Verstappen had to settle for second on the grid ahead of Sainz in third. Russell’s final lap was good enough to move him up to fourth, ahead of Perez in fifth and Hamilton the slowest of the top three teams in sixth place.

Valtteri Bottas claimed seventh on the grid in the Alfa Romeo behind his former team mate, with Kevin Magnussen taking eighth. Ricciardo will start from ninth on the grid, ahead of Mick Schumacher, who secured the best grid position of his career in tenth place.

RaceFans is run thanks in part to the generous support of its readers. By contributing £1 per month or £12 per year (or the ame in whichever currency you use) you can help cover the costs of creating, hosting and developing RaceFans today and in the future.