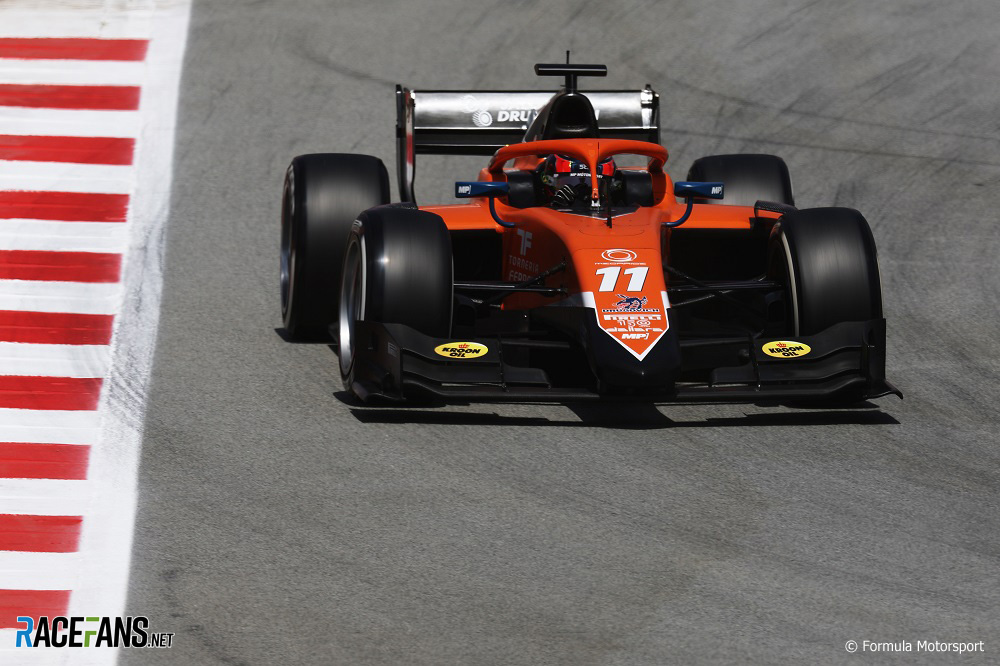 Felipe Drugovich claimed the Formula 2 Barcelona sprint race win, despite a three-place grid penalty that saw him start from fourth.

Drugovich had taken partially-reversed-grid pole but been given a three-place grid penalty for contact in Imola, promoting Calan Williams to the top spot, with Jake Hughes alongside him and Theo Pourchaire and Drugovich behind.

But when the lights went green at the start of the formation lap, Williams stalled on the line, not pulling away from the front of the field. Formula 2 rules state that if a car stalls on the grid it must begin the race from the pit lane, leaving an empty spot on the front of the grid.

Jake Hughes was granted de-facto pole as the only driver on the front row and Pourchaire was left with clean space ahead of him to accelerate down to turn one. Drugovich took the lead at the start as Ayumu Iwasa got a remarkable start from fifth to jump up to second. Logan Sargeant claimed third from sixth on the grid and Pourchaire and Hughes found themselves rapidly falling back. Matters only got worse for Pourchaire as Jüri Vips passed him through turn one on the second lap.

By lap five, Iwasa was under pressure from Sargeant but managing to keep ahead. Then, Vips’ race came to a sudden ended on lap six when a mistake in turn four saw him spinning into the gravel and bringing out the Safety Car.

“I’m always too aggressive, always,” bemoaned Vips while he was waiting to leave his stranded car, just a day after his Formula 1 first practice debut for Red Bull.

Meanwhile, Amaury Cordeel – one of two Formula 2 drivers dangerously close to receiving a race ban for exceeding the 12 penalty point limit – was placed under investigation for being out of position on the formation lap and failing to regain his place prior to the start. Cordeel was issued a ten-second stop-and-go penalty and two more penalty points on his licence, leaving him one away from a race ban.

The Safety Car came in on lap ten, with Drugovich getting away cleanly with the lead, Iwasa and Sargeant following. Cordeel served his stop-go penalty on the subsequent lap, putting him to the back of the field.

On lap 20, Daruvala managed to pull a move around turns one and two on Hughes, moving himself up to fourth. Pourchaire made the similar move on the subsequent lap and then Jack Doohan passed Hughes a lap later, Pourchaire’s rear tyres appearing to have no more life in them.

Daruvala attempted to eat into Sargeant’s advantage in the final laps, cutting it to two seconds from two-and-a-half on lap 23 but appeared to not have enough time remaining in the race to challenge for a podium.

Vesti passed Hughes on lap 23, the VAR driver dropping down the order and being hunted by Enzo Fittipaldi behind. Fittipaldi went round the outside of turn 12 to seal the move before even reaching the main straight, where Hughes was passed by Liam Lawson and Marcus Armstrong as well, pushing him down and out of the points to 11th.

Clement Novalak made an error on lap 25, running wide and dropping back to 14th while challenging Dennis Hauger for 12th.

However, out front, Drugovich’s lead never looked in question, coming across the finish line more than two seconds ahead of Iwasa. Sargeant was comfortably ahead of the rest of the pack, completing the podium.

Drugovich therefore takes the lead of the Formula 2 championship from Pourchaire, four points ahead of the ART driver heading into tomorrow’s feature race.