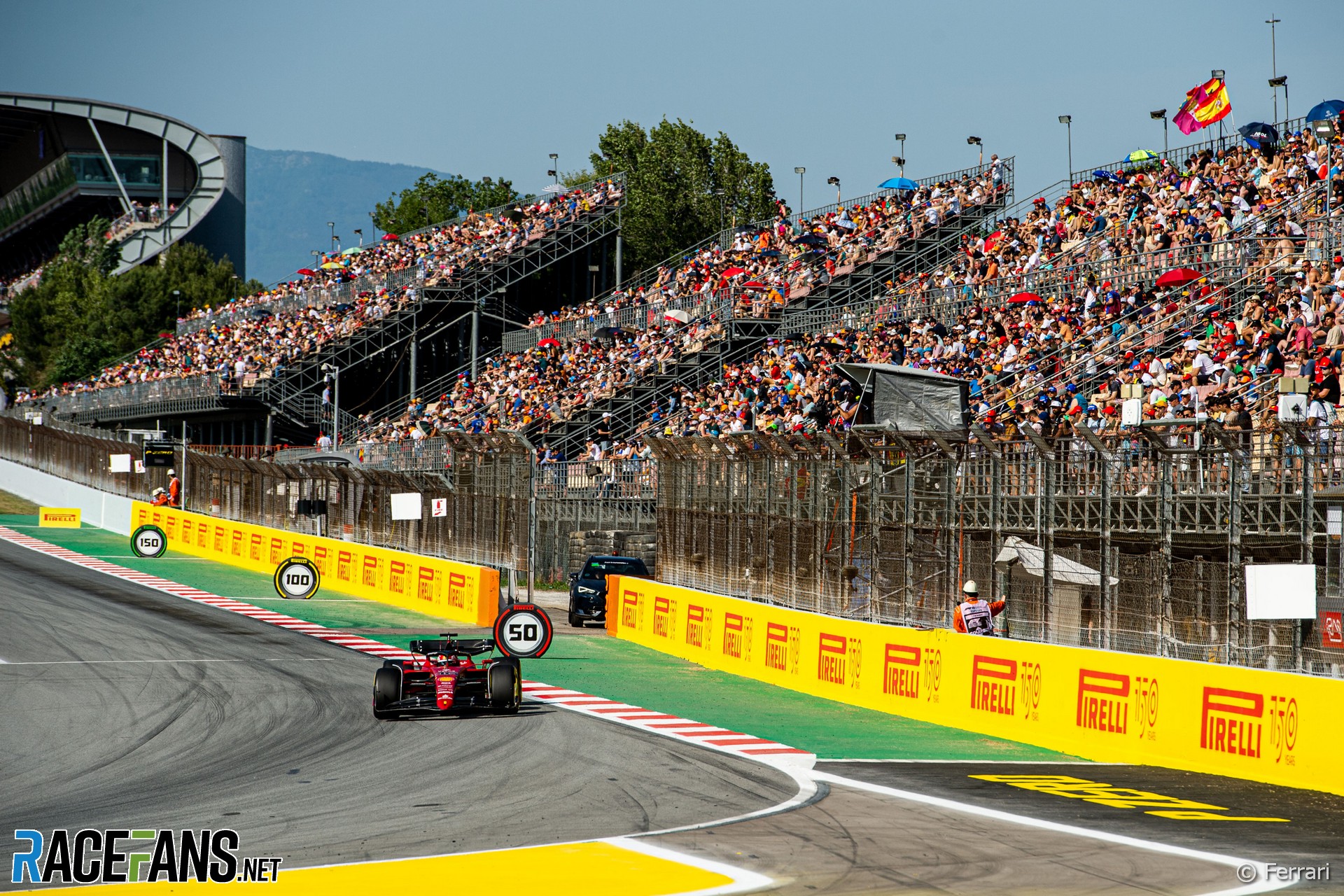 There is no track teams and drivers know as intimately as the Circuit de Barcelona-Catalunya on the southern coast of Spain.

As the most popular testing venue of the last 20 years, it’s rare that the Spanish Grand Prix throws up surprise results – 2012 aside – given how finely tuned car set ups will be after multiple days of pre-season testing and thousands of virtual laps completed in simulators.

But the 2022 edition of this race promises to be the most volatile race weekend in Barcelona for some time due to a myriad of factors that revealed themselves after the first day of running on Friday.

That conclusion may not be obvious judging on the lap times alone. Charles Leclerc and Ferrari set the pace in practice as they have done so many times throughout the opening rounds of the season. After Leclerc finished first practice three tenths of a second faster than championship rival Max Verstappen, he followed it up by being quicker in second practice than the Red Bull by an identical margin (0.336s).

Despite being slower than both Ferraris in both Friday sessions, Verstappen seemed happy with his day’s work and how the Red Bull appeared to perform over the 55 laps he completed around the Barcelona circuit over the course of the day. Especially given that he had the fastest average lap time on the long runs at the end of second practice out of the Red Bulls, Ferraris and Mercedes.

“Overall it’s been a good day,” Verstappen said. “The long runs look positive, so we can be happy with that.”

With Juri Vips concentrating on aerodynamic mapping during his hour behind the wheel of Sergio Perez’s car in the morning, Perez says he will carry out more low-fuel runs in the final practice session on Saturday morning to help him be fully prepared for what could be a crucial qualifying battle against Ferrari.

“I was able to get a read on the long runs and hopefully overnight I can find the time I need to be in contention for the fight for pole,” Perez said. “I will do some extra work on low fuel in the morning during FP3 to see which direction to take, but we are confident we know.”

Red Bull’s optimism explains why Leclerc seemed more cautious than might have been expected, given that he was the fastest in both sessions. “Our qualifying runs don’t look bad, but we have some work to do, in particular on our race pace and on tyre management,” Leclerc explained after Friday’s running.

After two rounds in a row with a small but still significant straight line speed disadvantage over the Red Bulls, Ferrari attempted to counter by running different rear wing configurations on Leclerc and team mate Carlos Sainz Jnr’s cars in the opening practice session. While Ferrari will have to wait until qualifying to see for sure how their maximum speed compares with their rivals, the fact both Leclerc and Verstappen both reached a top speed of 315km/h at the end of the main straight on their fastest laps of the day is not a bad sign for the Scuderia.

One interesting difference about this weekend for Red Bull and Ferrari, however, is that Verstappen was not the one closest to Leclerc on Friday. Instead, the Mercedes of George Russell and Lewis Hamilton sat second and third, one and two tenths respectively off Leclerc’s best time. Having introduced a wealth of upgrades to the W13 for this sixth round to counter the handling difficulties of the first five, trackside engineering director Andrew Shovlin seemed satisfied by the initial results they had seen on track.

“It’s been a solid start to the weekend,” Shovlin said. “The car is behaving more normally here in Barcelona.

“We’ve made progress on reducing the bouncing with this aero update and the pace looks to be a step forward; not quite at the level of Red Bull and Ferrari but we’ve hopefully pulled ourselves out of the midfield group. We’ll be running in the simulator in Brackley tonight, trying to find a bit more time in the car but at least we have a good platform to base this on and hopefully we can find a little bit more to carry into tomorrow.”

As well as the factory Mercedes team enjoying the benefits of updated cars, two of Mercedes’ power unit customers – McLaren and Aston Martin – also introduced major revisions to their cars on Friday. It may not have been reflected in the times – with Daniel Ricciardo 15th and Lando Norris in 20th and last after damaging his floor and having to sit out most of second practice while it was repaired – but Ricciardo is confident more performance is yet to come from the team’s new modifications to the MCL36.

“Right now, there’s still a lot to take in so I’m not too sure how much to look into the times today,” said Ricciardo.

“We clearly aren’t where we want to be on the time sheets but there’s a lot to dive into tonight. I think we’ll find some things and, let’s say, find the optimal set up for tomorrow and hopefully that puts us inside the top 10.”

McLaren’s Andrea Stella has no concerns Norris’s pace for the rest of the weekend will be compromised by damaging his new-specification floor. “We needed to stop his programme early, after we picked up some damage running over a kerb,” Stella explained, “but we can repair that overnight.”

Aston Martin’s revised package has been by far the most eye-catching among the paddock – if only for the striking resemblance the AMR22 now has to the Red Bull RB18. But with the FIA brushing aside Red Bull’s insinuations over its legality, Sebastian Vettel showed some promise by ending Friday eighth in the times.

“It feels like we are moving in the right direction,” said Vettel. “But we must remember that this is the first day of our running this car.

“You cannot make many comparisons to pre-season testing because the weather and track conditions are so different, so there is still a lot to learn and understand. We do not expect immediate results, but we want to continue to make progress.”

Ahead of his first Spanish Grand Prix in front of his home fans for four years, Fernando Alonso will have excited the thousand who will flock to the circuit tomorrow by being in the top six for both Friday sessions. But despite Alonso’s best single lap putting him ahead of one of the Red Bulls, in sixth, Alpine’s chief technical officer Pat Fry insists the team was focused on their race pace.

“We’re looking reasonably competitive on single-lap pace, as we have been recently,” Fry said, “but we have been concentrating on experiments to improve our long run pace and have plenty of data to work through this evening.

“It’s been a key area of focus for us at the moment and we’re trying different things to further improve our pace on that front. The upgrades we’ve brought to this race are relatively small steps but, they all count, they are functioning well, and we’re happy with those so far this weekend.”

There is one more important factor heading into qualifying – the weather.

With hot temperatures expected across the weekend, the high levels of tyre stress through sustained cornering loads around the circuit mean that degradation appears to be much higher than expected, with the soft tyres losing grip halfway around the lap when pushed due to overheating.

As Pirelli’s Mario Isola explains, the high tyre wear could lead to teams having to be very careful about the tyre sets they choose to use in the third and final practice session.

With one more hour of practice to go until qualifying locks teams into parc ferme conditions, there will be a lot more still to learn tomorrow about what could be a very stressful Sunday for drivers and their teams’ strategists.

8 comments on “Why Ferrari’s pace may flatter to deceive, and teams face a tricky tyre decision”