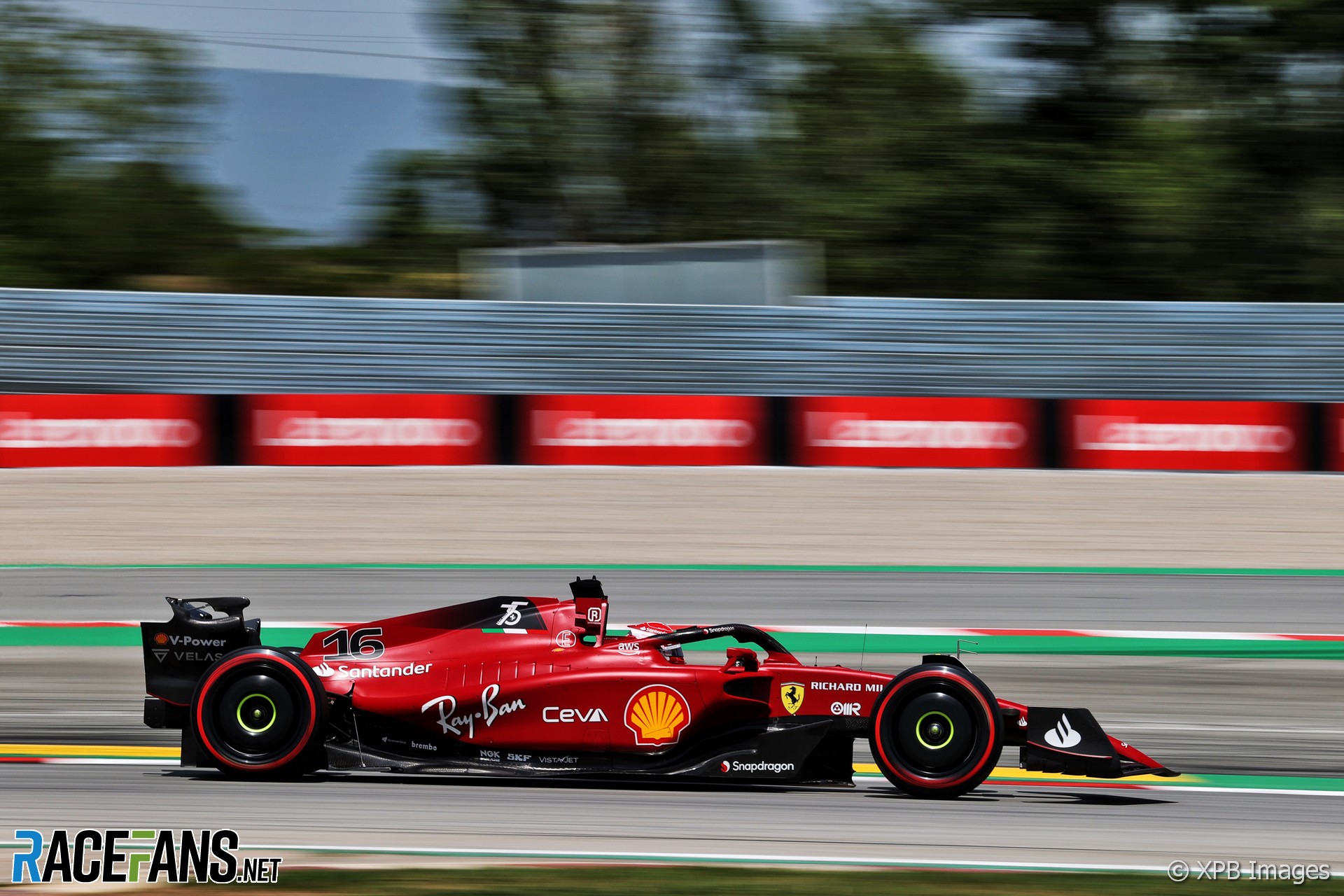 Charles Leclerc was quickest in the second practice session for the Spanish Grand Prix ahead of the two Mercedes of George Russell and Lewis Hamilton.

Just as he had been in the opening session in the afternoon, Leclerc was fastest of all on the soft tyres to cap off a promising start to the Barcelona weekend for Ferrari. Carlos Sainz Jnr was fourth, with Max Verstappen fifth quickest in the Red Bull.

After a warm start to the weekend in first practice, temperatures had breached the 30C mark for the start of the evening session. Sergio Perez, Zhou Guanyu and Alex Albon all took their cars back for the hour-long session after sitting out first practice in the afternoon.

Most of the field took to the circuit on the medium tyres to try to gain data. After ending the first session third fastest behind the two Ferraris, Verstappen set the early pace ahead of Sainz and Leclerc, but by less than a tenth of a second from the pair.

Valtteri Bottas only had a couple of laps underneath when his Alfa Romeo suddenly slowed along the main straight. Bottas stopped his car on the outside of turn two. The Virtual Safety Car was briefly called while the stricken Alfa Romeo was recovered, Bottas’s day having come to a close.

Lando Norris ran wide at turn seven, taking to the gravel in his McLaren. Not long after, Norris understeered wide again, this time at the fast, uphill right-hander of turn nine, running over the serrated kerbs on the outside of the corner and causing damage to the new floor on his car. Norris would return to the pits and not rejoin for the remainder of the hours.

Teams moved back onto the soft tyres as the session progressed, with Sebastian Vettel using the red-walled tyres to move briefly to the top of the times. Verstappen improved to retake the fastest time, before Sainz, then Leclerc replaced him.

The Mercedes of George Russell and Lewis Hamilton used the soft tyres to move into second and third place in the standings, respectively, which is where they would remain until the chequered flag.

Drivers appeared to be finding high tyre degradation around the Circuit de Catalunya, with Albon reporting over the radio that his soft tyres had “gone” by the time he’d reached turn nine half way around the lap on his push lap. Sainz was also warned that “degradation is high” on the softs over radio and told that the medium compound appeared to be faster.

By the time the chequered flag flew to end the day’s running, Leclerc’s 1’19.670 was enough to see him end the day on top – less than two tenths faster than he’d managed in the earlier session. Russell and Hamilton were the closest to the Ferrari, roughly a tenth apart.

Sainz ended the day third fastest, with Verstappen in fifth, another three tenths behind Leclerc. Alonso was sixth in the Alpine, with Perez seventh after his only run of the day. Sebastian Vettel, Esteban Ocon and the Haas of Mick Schumacher completed the top ten.