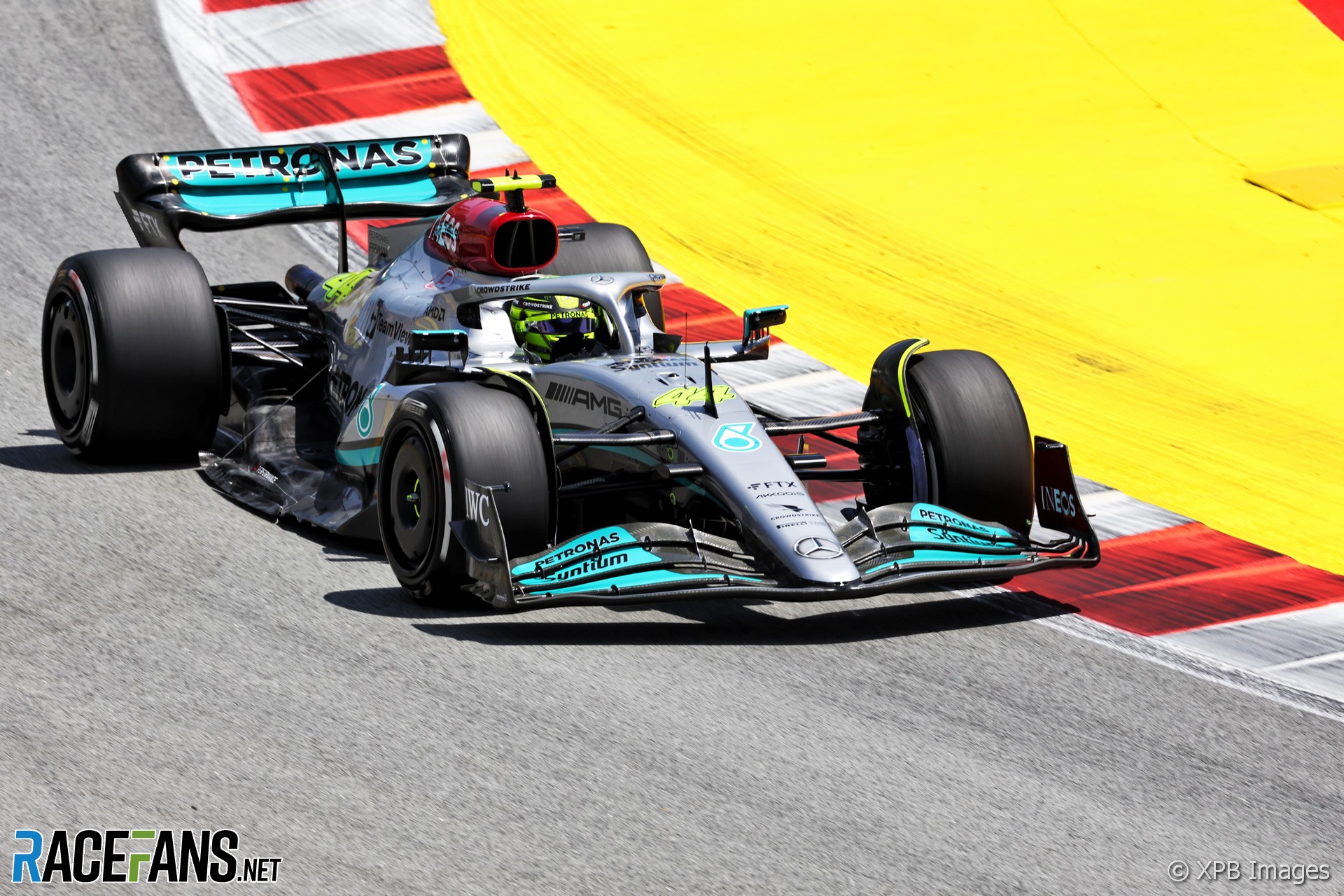 Lewis Hamilton is hopeful Mercedes can get within range of Ferrari and Red Bull after their new aerodynamic package gave promising results in practice for the Spanish Grand Prix.

Mercedes have been as much as a second per lap slower than Ferrari and Red Bull over the opening races of the season. However, they ended Friday practice at the Circuit de Catalunya second and third on the times sheets.

Mercedes brought a swathe of updates for their problematic W13 in Spain. They include several revisions to the floor intended to change the under-body aerodynamics, in order to address the porpoising problems which have troubled the team all year. Its front wing endplates have also been modified.

Hamilton said the first day of running with the updated car had been “positive” for the team. “I’m super-happy with the progress so a big, big thank you to everyone back at the factory for not giving up and for continuing to push.

“We’re not the quickest yet but I think we’re on our way.”

He said the porpoising the team experienced before has lessened in Spain. “It’s the first time we’ve driven down the straight without bouncing,” Hamilton said. “We’ve still got bouncing but it’s way better. So it’s starting to eke into a bit of the potential in our car.”

Mercedes performed well in Friday’s practice for the Miami Grand Prix, only to slip back to their usual performance level in qualifying and the race. However Hamilton is optimistic about their chances this weekend.

“It’s still tough out there with the car but it’s much nicer than it’s been before so I’m really grateful for those upgrades,” he said. “We just need to fine-tune them into the next session.

“So overnight there’s lots of data to go over and try to position the car. I think we can get it into an even better place for tomorrow so hopefully we can tackle the heels of the guys up ahead.”

Russell said the W13 is “definitely reacting differently” since the upgrade. “We’ve got different limitations this time.

“We definitely don’t have the porpoising in the straight which is good but we’re still experiencing it a bit here and there in the corners and ultimately you need to dial it out through the corners.”

However he isn’t convinced the team will be able to out-pace Red Bull again on Saturday. “Red Bull still look very, very strong, they look a team to be reckoned with at the moment,” he said.

Nonetheless Russell shares Hamilton’s belief that there is more to come from the upgraded car.

“I see no reason why we can’t be as far away from the front as we showed, if not a little bit closer,” he said. “But there’s differences with power modes. I think Ferrari and Red Bull were in their lowest power modes so they’ve got a bit on us there.”