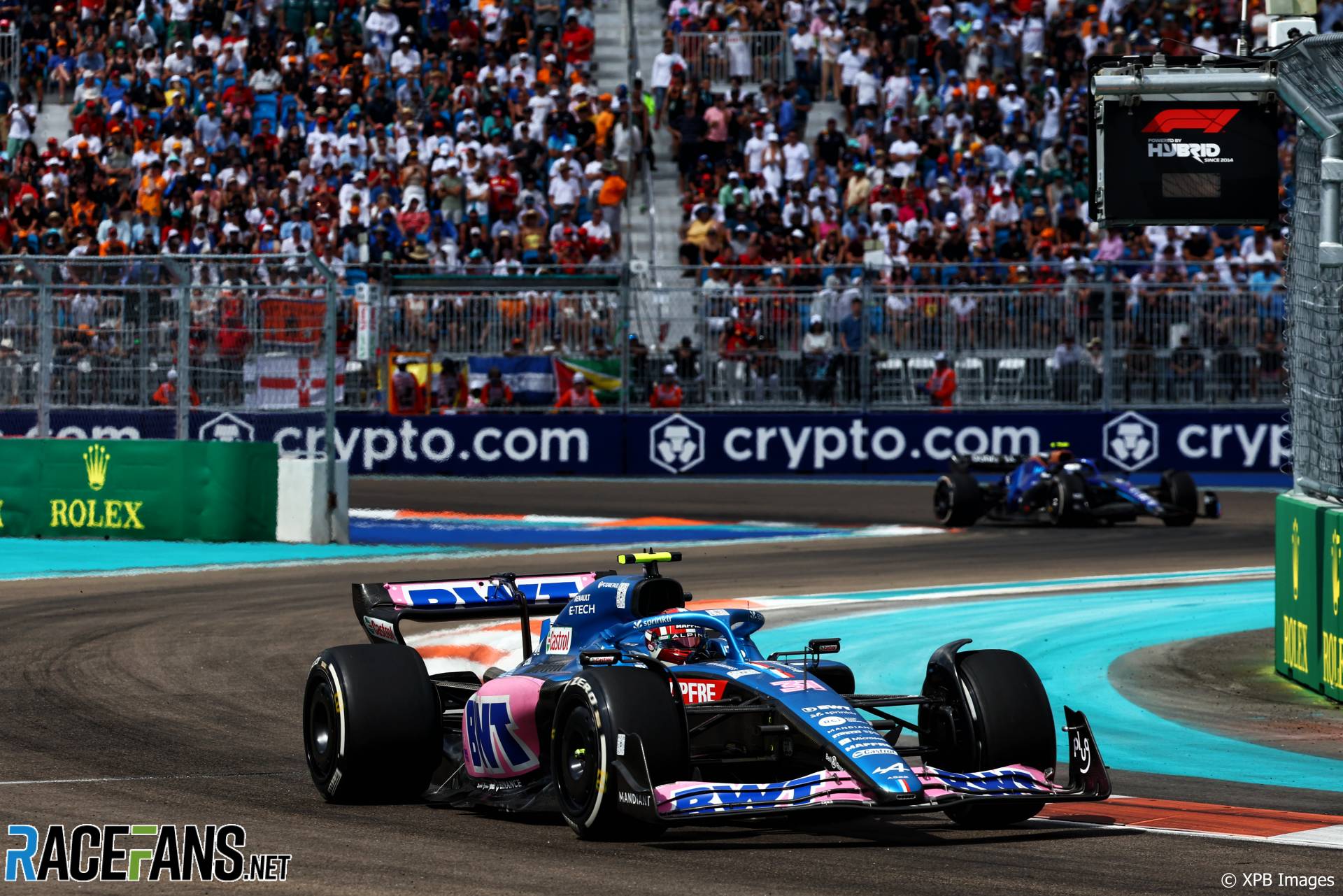 In the round-up: Esteban Ocon says scoring points from last place after his crash in practice felt like a victory.

Don't miss anything from RaceFans - join us on Facebook here to see whenever a new article has been added:

Ocon was unable to qualify for the Miami Grand Prix after heavily damaging his car during a final practice crash into the concrete barrier at turn 14. He recovered to eighth in the race, which he described as being “a victory for us.”

“I do think there was clearly a mountain to climb for all of us. But I think from the strategy to the radio calls, the tyre management, everything was perfect today.”

He admitted he felt in poor shape after his crash, which registered an impact of 51G. “To end up in the points being 50% physically as well for me feels like a win.”

AlphaTauri suffered a miserable Sunday in Miami, failing to take home any points after both drivers finished in the top 10. Contact ended Pierre Gasly’s race and Yuki Tsunoda suffered a loss of pace.

Technical director Jody Egginton said: “Yuki struggled in the first stint, so we gambled on an early stop but the pace and car balance in his second stint was also inconsistent, meaning it was difficult to make sufficient progress.

“We need to go through all the data to understand the reasons behind these issues. Yuki managed to show some better pace in his final stint on the soft tyre, but by this point we were running out of laps to move forward further, and he finished out of the points.”

“We have a lot of work ahead of us before we arrive in Barcelona,” Egginton admitted. “We need to understand the various factors behind today’s performance, so we can move forward with our package and get back to scoring points.”

Pirelli’s head of motorsport Mario Isola said cooler temperatures on Sunday in Miami allowed drivers to manage tyres to a one-stop strategy, rather than the two stops anticipated by the tyre manufacturer.

The Miami Grand Prix took place with track temperatures more than 10C cooler than in practice sessions, starting at less than 40C rather than the temperatures in excess of 52C seen during previous track time.

“A strong performance from the tyres here, which meant that the race gravitated towards a one-stop strategy, whereas we had previously anticipated a two-stopper,” said Isola. “This was also thanks to the fact that temperatures were notably cooler today compared to previous days.

“The teams were able to stretch their first stints, probably in the expectation of a safety car or other opportunity, but in the end that only came towards the end of the race, after nearly everybody had stopped.”

W Series has “same ambitions for America that F1 has”

W Series CEO Catherine Bond Muir has said that the series intends to build its largest fanbase in the United States, following its opening 2022 rounds being set at the Miami Grand Prix.

“I would like to have said that we chose Miami purposefully, that it was actually to start off with a bang because unquestionably this feels like the biggest party going on this weekend in the States,” Bond Muir explained. “But when we choose which races we’re going to we’re given a certain number of races we can go to and then it’s just a question of logistics, whether logistically we can get to places. So I don’t think we said, ‘right, we’re going to pick Miami and everything’s got to sort out around it’ but it was it was pretty close to it.

“We knew that this was going to be a massive event with a lot of noise in America,” she continued. “I make no bones about it that in the future I have the same ambitions for America that F1 has. We want America to be our largest audience because I think it’s going to be a much easier audience; they’re very, very engaged in sports, they’re increasingly engaged within Formula 1 because of Drive To Survive.

“But also they love women’s sport. There was a soccer match, football match a couple of weeks ago at Angel City that was sold out. They are absolutely embracing it and I’ve just been speaking to people now about it and they’re saying that it they believe it was the most exciting and the best soccer match that has ever happened in the states and it was all women. So we believe that this is a key market for us.”

Michael Bay about to do a hot lap – he’d better not make a film about it! pic.twitter.com/ThMuAKRyDJ

He was the first Black driver in the Indianapolis 500. @WillyRibbs is my host this weekend at the @F1 @f1miami. Fam, this is 🔥🔥🔥. Folks, F1 is amazing. This is my first race but not my last! @blkstarnetwork #BlackOwnedMediaMatters pic.twitter.com/rlNo9iMsIp

Lomko, a rookie driver who has come up from Formula 4 and is racing under a French license due to sanctions on his home country Russia, looked comfortable in the lead and had a gap of a second over Mansell after the first two laps.

Miami GP is the new US Open (Abby Rakshit on Medium)

With the addition of a night race in Las Vegas in 2023, which will probably see a Miami-esque experience on the West Coast, Austin and the United States Grand Prix have an arduous task ahead — how not to get overshadowed by its newer siblings and put on a spectacular show as the world watches while remembering who they are.

After the high temperatures of Miami failed to create a major degradation issue for drivers, Gusmaia asks if pit stops will become more of a final-lap formality (or opportune early-race safety car procedure) with this year’s compounds?

Issue for discussion during the week: Has Pirelli been too conservative on compound choices?

Okay, tyres failed in the last years and the new wheel might created some unknowns but Albon went the full distance on hards in Australia and Russell was set to do the same today. Furthermore mediums today went half the distance allowing for Verstappen and Leclerc to exchange fastest laps on the later part of the stint.

If we have the same selection for Barcelona, we will se more drivers starting on hards and trying to pull a full race on them.
Gusmaia