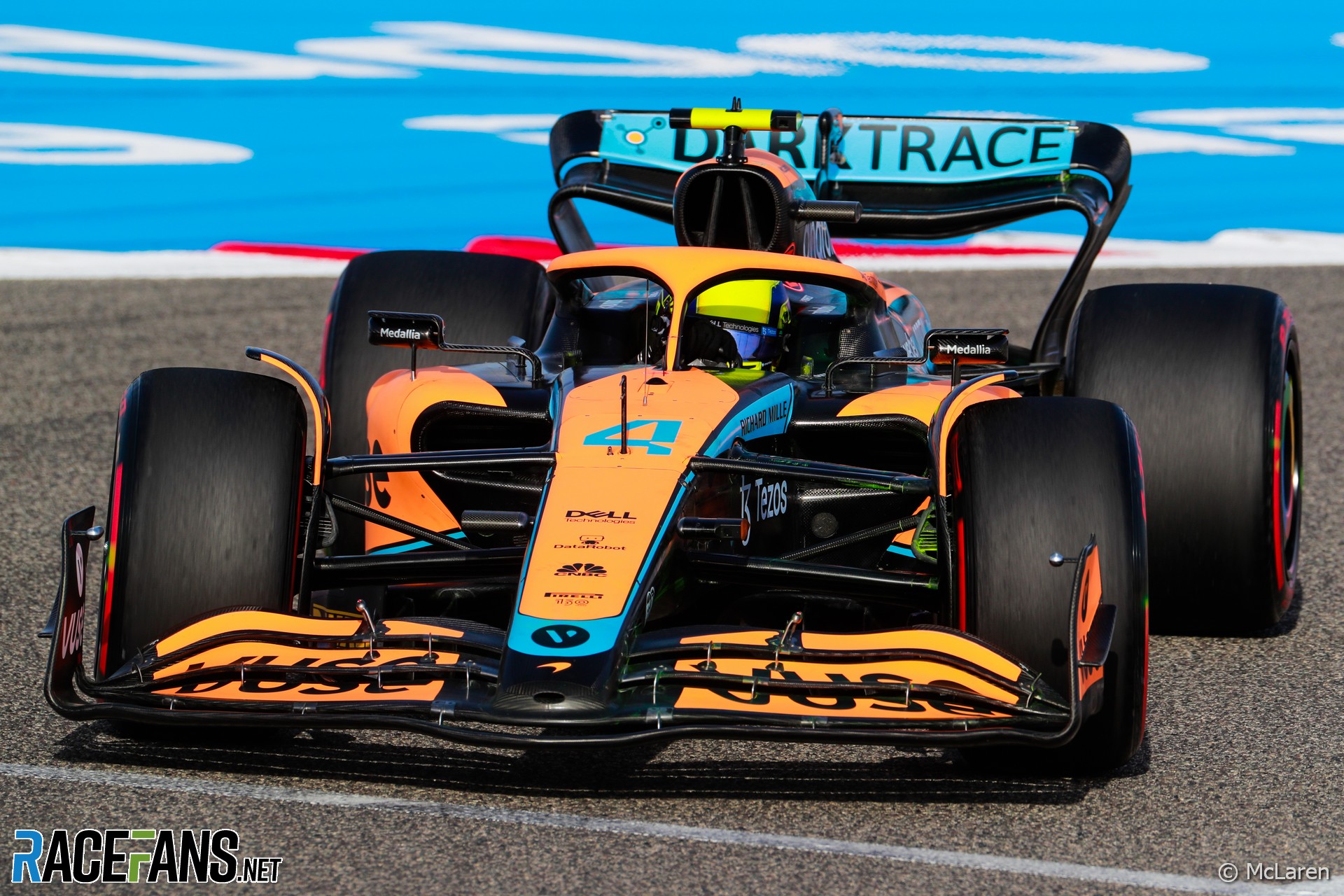 McLaren’s lack of pace was excruciatingly obvious in Bahrain.

While the MCL36 looked good during the first pre-season test at Barcelona, McLaren encountered problems with overheating brakes during the majority of the Bahrain test which limited how many consecutive laps they could run.

The team was able to produce a quick fix which allowed both drivers to reach the chequered flag in Bahrain. But team principal Andreas Seidl described it as “not the final, ideal solution.”

The team’s test was “heavily compromised by this unexpected brake issue” on the front axle of the car. The fact they had to quickly bring over new parts from the factory and have more to come indicate this problem had serious implications for the car’s front end.

At round one Daniel Ricciardo was eliminated in Q1 and Lando Norris progressed no further than Q2, underlining the challenging situation the team faces. The race pace was not much better, their fastest lap times being around 2.5 seconds off the lead pace. To put that in perspective, the whole grid was covered by 3.7s.

When asked about whether the lack of pace in the car stemmed from pure lack of performance or driveability, Norris admitted it was “a little bit of both.”

“It’s challenging to put a lap together, but then when you do put a lap together, you feel like you should be much higher than you are,” he explained. “The last lap I did in Q2 was a 32.0 or whatever it was, it feels like I should be sixth, seventh, or whatever, or pole. You’re performing and you feel like you’re extracting everything out of it. You’re just a long way off. So it’s a little bit of both.”

Norris’s best time in qualifying was a 1’32.008. In the same session Lewis Hamilton managed a 1’31.048 for Mercedes with the same tyre compound and power unit (pace-setter Max Verstappen was almost three-tenths further ahead).

Team principal Andreas Seidl was unflinching in his assessment of the team’s predicament. “The most important thing is for us now to simply acknowledge [the lack of performance] and compare us to the Mercedes works team,” he said. “We missed around a second to Mercedes. That’s the best reference for us we can have and that’s what we are focussing on as a team.”

A fundamental lack of grip is the root cause of their problems, he said. “We know we most likely would simply miss grip, which is probably a result of missing mechanical grip, plus aerodynamic grip.

“It could be that this track is maybe exaggerating the weaknesses we have in our package. But independent of that we want to get to a point where we have a strong car that works at all tracks and that’s what we have to focus on.”

In Barcelona testing, McLaren was one of few teams which didn’t seem to suffer too much from the dreaded ‘porpoising’. The car looked like a solid midfield contender. Seidl admitted the team had been optimistic about starting the season around the same level they ended last year, when they placed fourth in the constructors championship.

“It was a positive test because the car was working well straight out of the box,” he said. “I think we left Barcelona still seeing us in a position that we are fighting at least P4 again.”

However, now it seems that it may be the MCL36 may not have been producing sufficient downforce in the first place to encounter the problem in the same way their rivals did. Norris, who sounded utterly miserable as he circulated well outside the top 10 throughout the race, let slip just how grave their problems were when race engineer Will Joseph tried to convince him they could emulate the Mercedes drivers by fitting the hard tyre compound:

‘Points’ of downforce is a somewhat opaque term as teams often define internally what a ‘point’ is worth to them. In most cases, a ‘point’ represents a fraction (around a hundredth) of a physical characteristic such as the Coefficient of Lift (Cl) or a force coefficient.

As downforce is a function of the square of the speed, a small difference, in the neighbourhood of ‘tens of points’ can make a big difference in lap time. Norris referred to a hundred, so their deficit to Mercedes is clearly significant. And the world champions were not the benchmark team last weekend: By the end of qualifying Hamilton was 0.68s off pole position.

How long will it take McLaren to address the problem? If it relates to its core aerodynamic philosophy, or if the brake cooling fix has forced severe compromises to its original concept, not only is the current configuration and performance at risk but all the upgrades in the pipeline would have to be re-thought. Aerodynamic components take time to simulate, test and manufacture, so it will not be a quick fix.

Making the situation worse, the further upstream (front wing, brake ducts, etc…) an aerodynamic change has to be made, the more components downstream it affects, and may call for tweaks all around the car. As updates get put onto the car, the situation for McLaren may improve, but they will be playing ‘catch-up’ as the teams in front continue to develop their cars as well.

Not only will the pure amount of aerodynamic grip be a factor for McLaren’s journey back to the front of the mid-pack, as we have seen from testing and race weekend, but the set-up of the cars also varies widely from track to track. In order to start scoring points, McLaren will also need to gain a deeper understanding of their mechanical grip to ensure that the two systems work together to provide a strong package.

Given the definitive lack of pace, and because Saudi Arabia follows Bahrain back-to-back, there is too little time for these core issues to be resolved before this weekend’s race. However, the Jeddah Corniche Circuit is a much quicker layout to Bahrain and may suit the MCL 36 better – or worse.

It could be a few races into the season before we see McLaren back on form. After the Bahrain race Norris admitted he’s “hoping this is as bad as it gets.”

Alto is a motorsport journalist and graduated from Cranfield University with a MS in Advanced Motorsport Mechatronics. He has previously covered a range of...
Read more about Alto Ono, find all their articles and get in touch with them