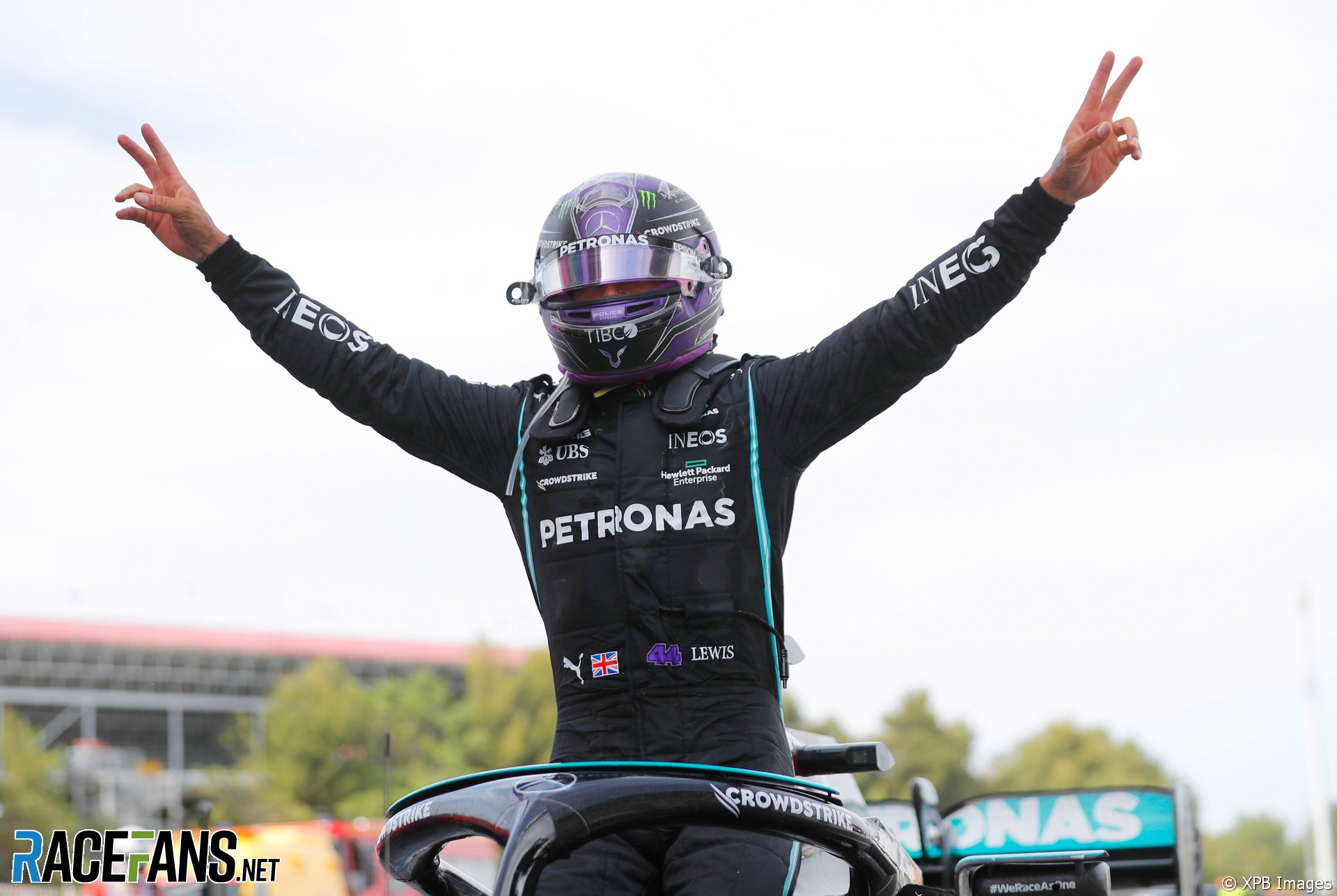 When it comes to statistics and records, Lewis Hamilton stands alone above the hundreds of drivers who have ever sat in the cockpit of a Formula 1 car.

Over recent years, the Mercedes driver has not just reached the dizzying heights achieved by Michael Schumacher – he has surpassed many of them.

A seven-times world champion, Hamilton is among the most well known names motorsport has ever had. Hamilton’s advocacy for social justice, outspoken promotion for more people of colour in motorsport and equal rights for the LGBTQ+ community has made him one of the most recognisable and influential figures in world sport.

On the track, with 103 pole positions, 103 grand prix victories and 182 podium appearances, Hamilton’s real world CV reads like it was achieved by a player in a computer game. Only the fastest lap record eludes him – one that will be prove difficult given that the modern era of no refueling and rapidly degrading tyres means fastest lap is often claimed by drivers who fit fresh rubber in the late stages of races.

But after equaling Schumacher in the most important statistic of all – world championships – Hamilton’s future is arguably at its most uncertain than any point through his 15-season Formula 1 career.

After losing the 2021 world drivers’ championship to Max Verstappen in deeply controversial circumstances during the final race of the season, Hamilton has been keeping a low profile as he contemplates his F1 future. While under contract for 2022, Mercedes team principal Toto Wolff has admitted that even he is unsure whether the team’s most successful ever driver will return to race for them during this upcoming season.

Even if Hamilton does indeed return to the grid in a quest for that eighth title, the dramatic overhaul of regulations means that there is no guarantee that the old order will be maintained in this all-new era of Formula 1. And with such a wealth of talent on the grid – include new champion Verstappen – the competition over the championship has arguably never been fiercer.

At the age of 37, having already achieved more than any other driver who has ever sat on a grand prix grid and very plausibly disillusioned over the sport he has dominated for so long, never have so many unknowns surrounded Hamilton’s career before. At the heart of this lies a key question – has Lewis Hamilton already won his final world championship crown?

All world championship reigns come to an end – even those that span multiple seasons. Success is no guarantee of future success – Michael Schumacher, Sebastian Vettel and the recently retired Kimi Raikkonen can attest to that.

While Verstappen may have taken the world title in contentious circumstances, they had nothing to do with the Red Bull driver himself. Toto Wolff crediting Verstappen as a “worthy champion” reflects how his talent and performances have become such a headache not just for Hamilton, but the entire Mercedes team. The road to yet another title for the most successful driver-team pairing in history may very well run through Max Verstappen and Red Bull again over the years to come.

There is also the remarkable level of young talent on the grid in the modern era, with Lando Norris, Charles Leclerc, Carlos Sainz Jnr, Esteban Ocon and Pierre Gasly all showing they have the skills to compete for victories and potentially championships if given the opportunity. And then there’s George Russell – Hamilton’s rapid new team mate at Mercedes – who may turn out to be quicker than Bottas often proved to be during their years together.

That is, of course, if Hamilton chooses to return to the sport at all. What happened in Abu Dhabi naturally stung Hamilton’s fierce competitive nature deeply. It’s hardly a surprise he is taking his time this off-season to ponder whether to continue in the sport after his year-long fight to win an eighth championship ended as it did last year.

Assuming that Hamilton does decide to continue racing in Formula 1, there’s little evidence to suggest the 37-year-old is beyond the peak of his powers.

Were it not for a highly unusual decision by race director Michael Masi to only allow the five lapped cars between Hamilton and Verstappen by the safety car at the end of the Abu Dhabi Grand Prix, Hamilton would almost certainly already be an eight-time champion.

Verstappen may have demonstrated his incredible pace in recent years, but Hamilton has shown no signs of slowing down himself. He handed team mate Valtteri Bottas his heaviest defeat in their fifth and final season together. He managed to take wins against Verstappen last year even when Red Bull appeared to be faster, such as the opening race in Bahrain. His wheel-to-wheel racing abilities were shown off best during the Sao Paulo Grand Prix, where he put on a masterclass of overtaking on consecutive days to win against Verstappen.

Even if Mercedes begin the 2022 season on the back foot performance wise, the team has enough resources, expertise and experience to make it likely only a temporary dip at worst. Even if the title or even race wins elude Hamilton and his team this year, it’s almost certain Mercedes will happily continue to offer him a seat in their car for as long as he wants one. Ruling out another successful campaign over the next few years seems unwise.

No one amasses 103 pole positions in Formula 1 unless their single-lap performance is truly elite. No one wins 103 grands prix without possessing incredible natural racing ability. The last few years have seen Hamilton produce some of his very best performances out on the track. If you expect or hope for him to suddenly lose his potency in the cockpit over seasons to come, you’re likely to be disappointed.

Whatever weight people place on the Mercedes team’s ability to routinely churn championship-calibre cars out of Brackley and Brixworth, it would be foolish to overlook Hamilton’s input and influence in developing all of them as a driver through his feedback and his constant pushing for more from his team. When Mercedes became the first team to publicly announce they had fired up the power unit on their 2022-spec W13, it was a clear statement of intent to their other nine rivals. That statement being ‘we are more than ready for this new season’.

Hamilton’s hurt over the events of Abu Dhabi is entirely understandable. Many share differing views over the events that led to him losing the 2021 world championship, but very, very few of us would likely have handled those moments after the chequered flag as well or as professionally as Hamilton did. As someone who has invoked the ‘still I rise’ mantra of the powerful poet and woman of colour Maya Angelou over his time with Mercedes, the idea of Hamilton giving up or turning away from facing his challenges head on is something that goes against his fundamental character as a racer and as a human being.

Unless the FIA fails spectacularly to adequately explain the events surrounding that final safety car restart or take meaningful actions to ensure it never happens again, do not be surprised if Hamilton returns to the grid in Bahrain more determined and motivated than he has ever been before.

It takes a very, very brave person to count out the most successful driver ever from taking yet another world title before the sun finally sets on the most prolific career the sport has seen to date.

Do you believe that Lewis Hamilton has won his final F1 world championship?