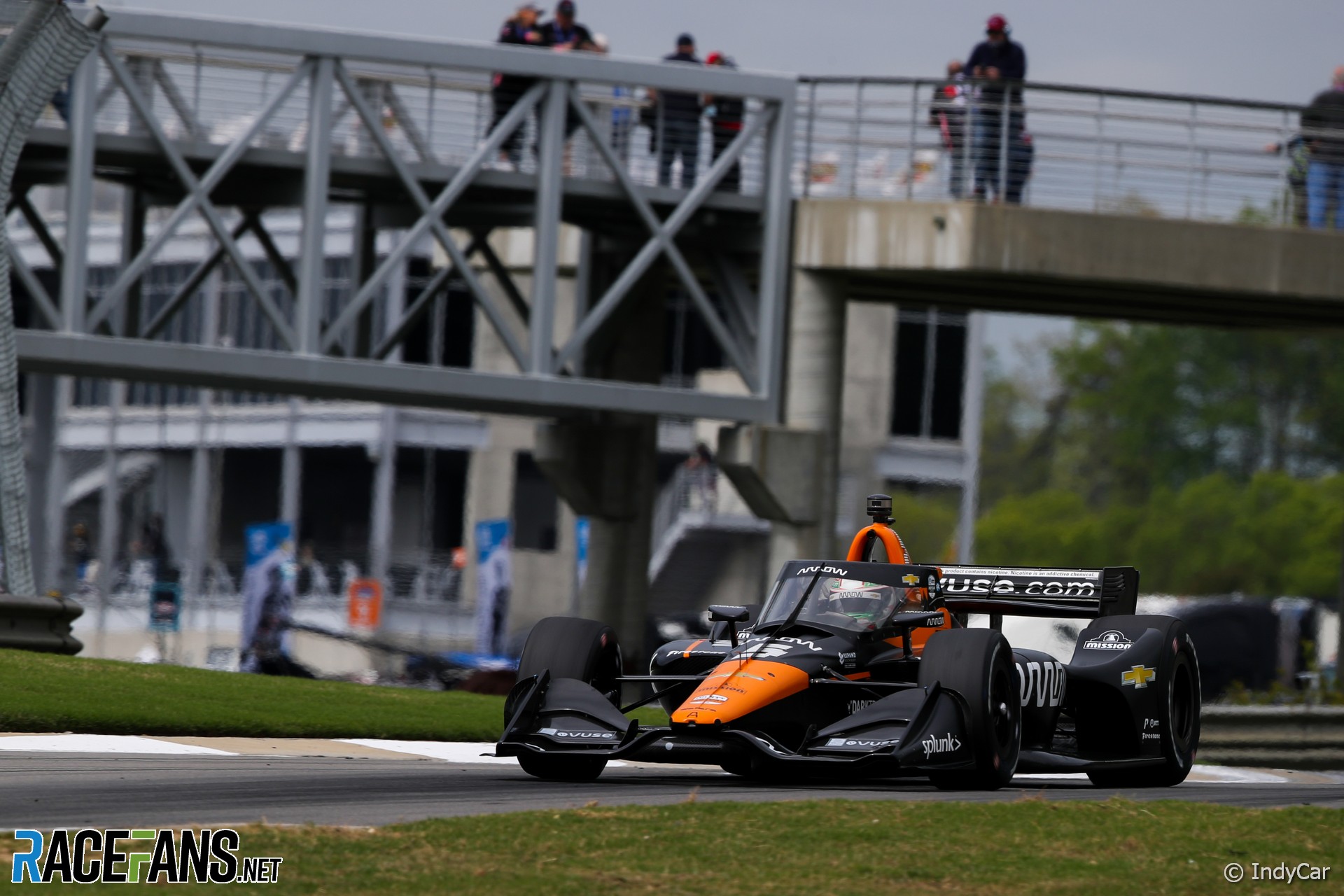 In the round-up: Qualifying for the first IndyCar race of 2021 was almost curtailed by power blackouts at Barber Motorsports Park, but it went ahead in thrilling style.

The 2021 IndyCar season got underway at Barber Motorsports Park on Saturday with the day split by a major power outage between the two practice sessions and qualifying.

Qualifying in IndyCar is split into two groups of drivers at first, and Ganassi’s Alex Palou set a new track record in group one while team mate and seven-times NASCAR Cup series champion Jimmie Johnson avoided starting last for his IndyCar debut by outpacing Dalton Kellett.

The second group was interrupted by a crash for Andretti Autosport’s James Hinchcliffe, who skated through the gravel and caused the session to be red flagged when he got stuck in the barriers, and only a few minutes remained when the session restarted. The lap times tumbled once the drivers were back on track, and McLaren SP’s Patricio O’Ward went fastest despite almost flying off track at the end of his fastest lap. In second place was Coyne/Rick Ware debutant Romain Grosjean who was celebrating his 35th birthday and racing comeback.

A spin for O’Ward’s team mate Felix Rosenqvist at the end meant his best lap was removed, and promoted Andretti’s Colton Herta into sixth place and enabled him to progress to the next stage of qualifying.

The 12 drivers in that segment were closely matched in the next qualifying session, bar Penske rookie Scott McLaughlin who was using a different tyre compound, and Herta topped O’Ward on the first runs.

Ganassi’s Marcus Ericsson and fellow ex-F1 driver Grosjean both briefly went fastest in the final two minutes, with Grosjean then returning to the top with one minute to go. His decision to pit after that meant he couldn’t respond to the drivers improving around him, and he was shuffled out of the progression spots to the Fast Six session as O’Ward went fastest again.

O’Ward carried that confidence into the pole-deciding Fast Six, setting a 1’05.848 that couldn’t be matched and meaning he starts the opening race of the season from the first place grid spot. Practice pacesetter Alexander Rossi got within two tenths for Andretti, while Palou and Penske’s Will Power will fill the second row of the grid.

Scott Dixon and Ericsson fill an all-Ganassi third row, with Grosjean lining up in seventh for his first IndyCar race later today.

Valtteri Bottas: "Q3 first run, I went into turn two and had a really sudden snap from the rear end and I lost a lot of time. The same in run two, I couldn’t trust the rear end. That isn’t something I felt in Q1 or Q2 so it’s difficult to understand - we will have to investigate."

Sweden’s Linus Lundqvist this afternoon claimed an emphatic victory for the Global Racing Group with HMD Motorsports team as Indy Lights made its eagerly anticipated return following a one-year hiatus, and with drama from the off as two of the title favourites collided.

The system provides an additional 50 horsepower from the Dallara IL-15 car’s turbocharged 2.0-liter straight-four engine that can be deployed when within one second of the driver ahead, and was trialled in practice. Glitches were found that could have provided one driver with an unfair advantage, so championship operator Andersen Promotions opted against its use to ensure parity across the grid.

Imola race one report: Vidales wins ahead of Quinn and David (FRECA)

Three drivers of three different teams conquer the podium in the first race of the Formula Regional European Championship by Alpine. It is the Spaniard David Vidales of Prema Powerteam to win the race after starting from pole and keeping the first position all the way, despite two restarts after safety cars.

The Iceman isn't ready to pass the torch anytime soon. Dixon begins his 21st season in IndyCar with Sunday's season-opening race at Barber Motorsports Park in pursuit of Foyt's all-time marks. The six-times champion needs just one more title to tie Foyt's record of seven and his 50 career victories trail only Foyt (67) and Mario Andretti (52) in the record books.

The closest qualifying between the top eight since 2012 🤯

|@PatricioOWard runs wide, kicks up a ton of dust, keeps his foot in and goes quickest in @IndyCar qualifying. Time not disallowed. Then his team mate @FRosenqvist gets stuck in a gravel trap.@IndyCar knows how to do track limits. @F1 please take note.#IndyCar #F1

Power is out at @BarberMotorPark so we're on an indefinite hold for the start of the second @USF2000 race.

The lap times from practice didn’t make it clear who would be favourite for pole in the Emilia-Romagna Grand Prix, and each segment of qualifying offered a different respective as Mercedes and Red Bull used different strategies. In the end Lewis Hamilton came out on top, just ahead of Red Bull duo Sergio Perez and Max Verstappen, while Hamilton’s Mercedes team mate Valtteri Bottas was only sixth. David BR summarised how there is a lot to think about the result in the top positions alone.

A load of takeaways from this qualifying session, Perez beating Verstappen being the primary one. That must be a real wakeup call for Max, it pushes Perez into Ricciardo territory in terms of team mate threat for him. Undoubtedly Max showed more pace overall, but this is what a real championship battle looks like. He should have nailed pole on a track where overtaking is tricky. He needs a good start tomorrow, though Hamilton is exposed by the woeful performance of Bottas.
David BR

Happy birthday to Alan and Consi!