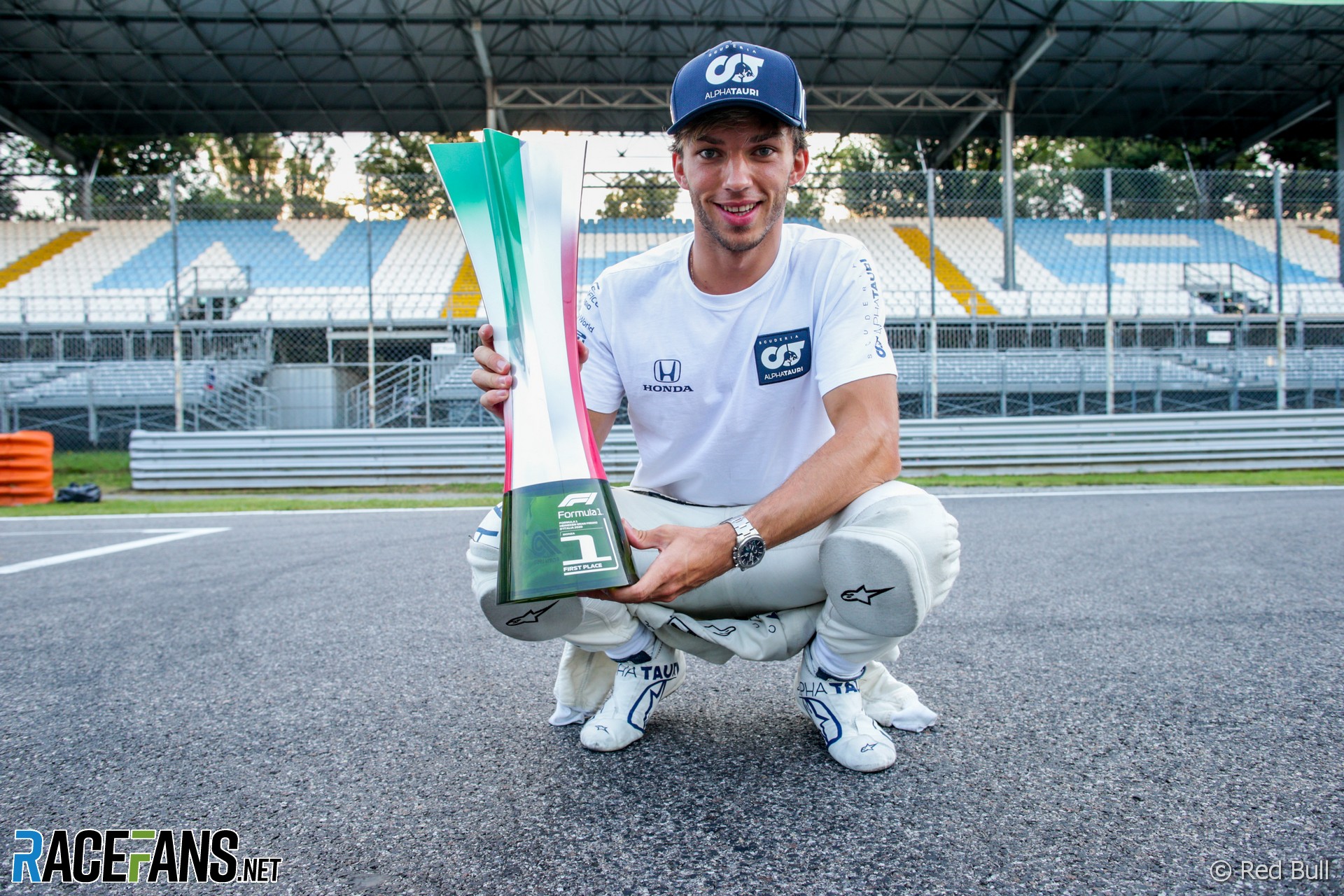 The Italian Grand Prix produced the biggest shock of the 2020 F1 season, as Pierre Gasly took advantage of a rare mistake by Lewis Hamilton and Mercedes to score a breakthrough win.

Speaking to select media including RaceFans four days after his unexpected triumph at Monza, the AlphaTauri driver admitted he was still coming to terms with the reality of his breakthrough triumph.

“It’s been such a crazy time since the moment I crossed the line,” said Gasly. “Honestly, I didn’t have one second to really sit down – or more than 30 minutes to sit down and just realise and understand, ‘OK, well, what’s been happening to my life?'”

“It’s just been a crazy ride from TV, radios, interviews, receiving messages. As soon as I was doing one action, there was five [more] coming to me.”

As well as being only the second victory for his team – which won the same race in 2008 as Toro Rosso – Gasly’s win is the first for a French F1 driver since Olivier Panis triumphed at Monaco 24 years earlier. To his astonishment, Gasly found French president Emmanuel Macron among his voicemail messages.

“This was probably the most unexpected phone call and the one that made me the proudest,” he said. “I got out from the engineering room and I heard that I’d received some messages, people telling me, ‘okay, listen to your voicemail, because there’s probably one message you don’t want to miss.’

“[It was] very touching words and it sort of made me realise something big happened today in my life for the president to call me. It was a very special moment.”

Many of Gasly’s rivals were seen congratulating him in person after the chequered flag fell. Despite the rift between him and former karting rival Esteban Ocon, the Renault driver also sent his congratulations “by message”, Gasly confirms.

Gasly’s win, with a midfield team which has historically served as stepping stone for future Red Bull drivers, follows an incredibly difficult 12 months in the driver’s personal and professional lives.

Following his successful 2018 debut at the team (then Toro Rosso), Gasly was promoted to the senior Red Bull squad alonside Max Verstappen. But after just 12 races, including more than one occasion where he was lapped by his team mate, Gasly was demoted back to the junior outfit.

His current team mate Daniil Kvyat went through much the same crushing experience of being sent back from Red Bull in 2016. Gasly responded impressively, all the more so given the appalling events of last year’s Belgian Grand Prix.

At the first race weekend following Gasly’s ousting from Red Bull, his childhood friend and former housemate Anthoine Hubert was killed during a Formula 2 race.

Nonetheless Gasly rediscovered his form. Having scored 54 points over 12 races at Red Bull he collected 41 over the final nine rounds in his theoretically inferior Toro Rosso. That included a then career-best second-place finish in Brazil, which brought his first appearance on the Formula 1 podium.

Gasly credited the ability to handle the situation and come back with his best ever results – and now first Formula 1 win – to the fighting spirit he has had since childhood.

“I have had it in me since I was very little,” he says. “I had to fight for everything I wanted in my career. In karting, from season to season and generally everything in my life, nothing was really granted.

“I think it’s a mentality that I got from my brothers, from my family and education. It really helped me through my career. And even more last year with everything that happened.

“Obviously the biggest challenge I had was probably going from Red Bull to Toro Rosso. And then afterwards, when Anthoine died at the same time, putting all that together was mentally difficult.

“But I never lost faith and I always knew what I wanted, in my mind, what was my personal targets. And I always kept working for it. There was not one single day where I adopted an outlook that ‘things are not going my way.’

“I thought, ‘OK, just focus on yourself,’ focus on making the best out of the team, of myself, of my relationship with them. And race by race, we got better and better.”

Monza is the home race for the Faenza-based AlphaTauri squad. It is also Gasly’s literal home, having moved to Milan recently, making that breakthrough win even more special.

“I thought there was probably no better place for me to win my first race because I just moved, two months ago, to Milan – I was in Bologna before.

“You really feel that moment. That was the first time in my career that I slept in my own bed for a race, since I was 16. To wake up every morning in my room, in my bedroom, to go and do my own coffee at home and leaving with my car to go to the race track and then going back at night was a bit different than usual and a different feeling.

“I must say my sofa never felt as good as right now! And my bed as well. I’m really feeling like this is the place I want to spend more time in and for the future, because I really relate it to this great victory I’ve had and it clearly reminds me of a great feeling. So I am really happy to have moved there.”

His success has inevitably prompted questions whether he might be able to do what Kvyat has not yet managed – win promotion back to Red Bull. But could AlphaTauri become a team where he could win races regularly and compete for the championship?

“I think it’s obviously difficult to say. Now, my goal as a driver is to motivate all the people around me and really try to extract 100% from everybody. Obviously, you need to be perfect on your side, show your dedication in everything you do, meet your commitments and motivate.

“Because everybody has their day and whether people are in a good mood or in a bad mood in the end they all have their impact on the performance. That is something I really pay attention to because I know the final result doesn’t come by surprise.

“I’m really aware now if we say one day we’re going to repeat this kind of performance on a more regular basis, is is impossible to say for me now. Obviously, in the last 15 years this team has had two wins, one with Seb and one with me now and that will be a target.

“But we also need to be quite objective and realistic about the whole F1 situation with the top teams having more budget, more resources. It’s not a one or two-year project. It will take a lot more time. But my goal is to bring as much success to this team as possible and that’s for sure.”

Following the setback of his departure from Red Bull, Gasly is clearly thriving at AlphaTauri. “The team is supporting me 100% in every area in giving me the tools I need to be competitive,” he says.

“They gave me my first opportunity in Formula 1, which obviously makes our relationship quite special. They gave me everything, all the tools necessary for me to get my first podium in Brazil and now my first win. So now it’s it’s really special.

“I feel as though every single person in this team is committed to my own performance, in my personal performance, in doing that extra job to do it for myself and really, for ourselves to get the best, the best like Red Bull can. And at the end of the day, it’s a team sport. And, you know, that’s that’s what you need to be successful in Formula 1.”

One of Gasly’s helmets is now displayed in the AlphaTauri office, next to that of 2008 Monza victor Vettel, who went on to win four world titles with Red Bull. Gasly gets to keep his winner’s trophy, after many of his previous trophies were stolen during a break-in earlier this year.

“I was thinking luckily the robbers didn’t come two weeks later because I think I would have been really upset,” he admits.

The sight of the trophy was drove home the reality of his Monza victory when he awoke the morning after. Revealingly, he jokes that following the previous night’s celebrations his first thought was: “You need to drink a bit of water.”

Then he caught sight of the trophy: “I just went in my living room and saw the trophy and realised, OK, everything that just happened is real. We’ve done it. We won the race.”