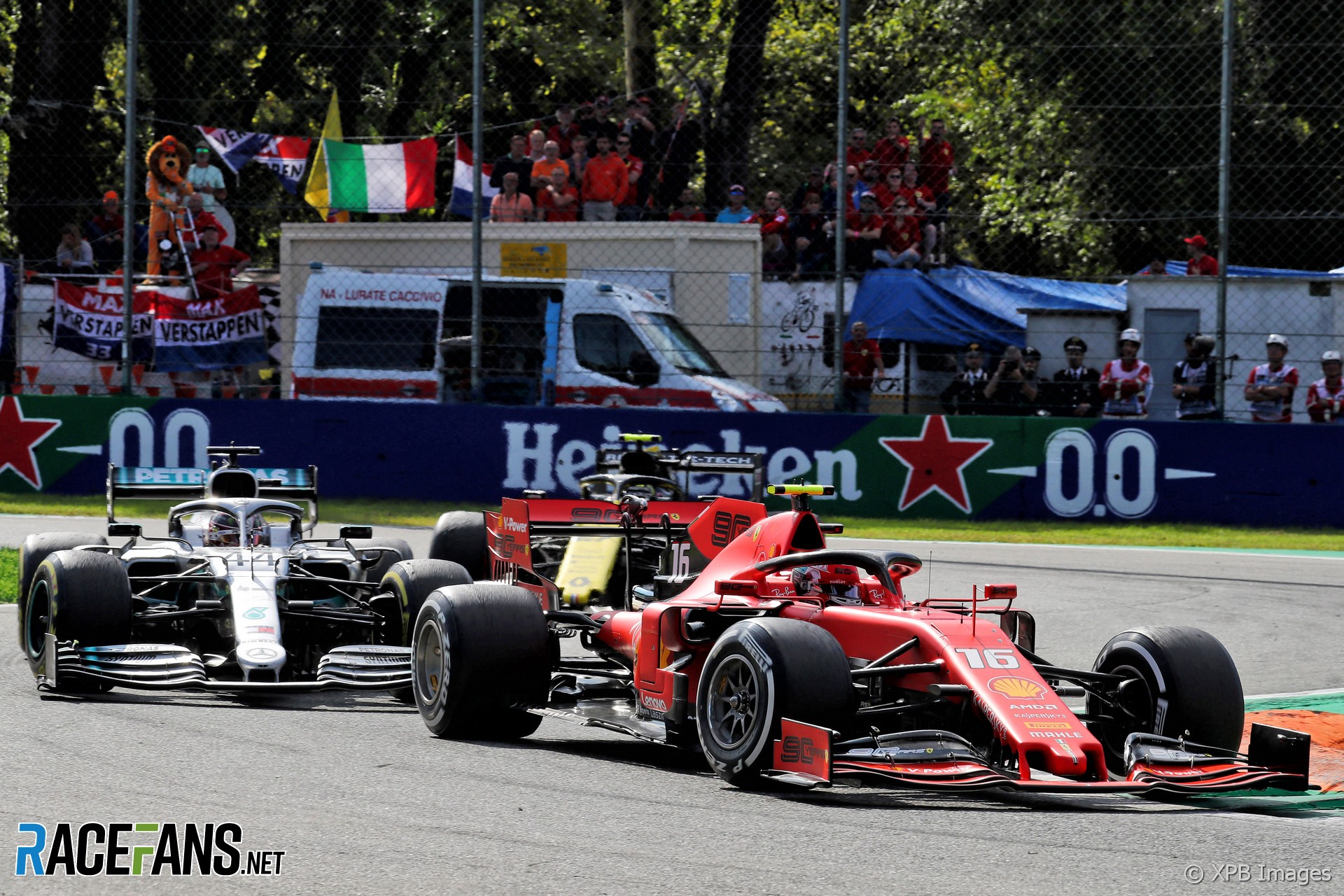 The pivotal moment of the Italian Grand Prix came on lap 24 of the race.

This was not when Charles Leclerc squeezed Lewis Hamilton onto the kerb approaching the Roggia chicane, forcing the Mercedes driver onto the run-off and denying his attempt to take the lead. But a lap later, when the stewards showed him the black-and-white flag for the incident.

Many felt Leclerc had been treated leniently. Mercedes team principal Toto Wolff insinuated the stewards wouldn’t want to give him the kind of penalty Sebastian Vettel received in Canada. And who could blame them feeling that was in the cauldron of Ferrari fervour that is Monza.

Hamilton, who in Montreal showed keeps a fresh mental copy of the F1 rules and regulations, laid a specific charge at Leclerc as he resumed the chase in his W10. “He didn’t leave me a car’s width there. He pushed me off.”

Clearly, Hamilton was right. But whether Leclerc was required to leave him space is debatable.

The convention that a defending driver has to leave a car’s width for a rival dates back to a spirited battle between Hamilton and Michael Schumacher at this track eight years earlier. After that it was established that a driver who moves off the racing line and then moves back towards it must leave room for another car.

This was originally added to the F1 Sporting Regulations, then moved to the International Sporting Code, where it remains: “Any driver moving back towards the racing line, having earlier defended his position offline, should leave at least one car width between his own car and the edge of the track on the approach to the corner.”

In the case of Hamilton and Leclerc last weekend, did the Ferrari driver “defend his position offline”? If not, it therefore follows he was not required to leave Hamilton a car’s width.

The footage of the incident indicates Leclerc followed a fairly standard trajectory through Curva Grande, then began crossing the track from left to right. Afterwards Hamilton made comparisons with Max Verstappen’s five-second penalty for failing to leave room for Valtteri Bottas last year, but on that occasion Verstappen made an unambiguous move off the racing line then back towards it.

Within a minute of the incident taking place, Leclerc was shown the black-and-white flag for it. But exactly how he transgressed wasn’t clear. When told he was being shown the recently-revived signal, Leclerc asked: “Why?” He received no reply.

The watching world was none the wiser. A week earlier, when Pierre Gasly was shown the black-and-white flag at Spa, race control flashed up a message explaining it was for “moving under brakes”. This time there was no such explanation.

Later, Ferrari told Leclerc “no moving under braking turn four”, which he denied doing. However it seems this was the true reason for the signal, not that Leclerc had failed to leave Hamilton space. FIA race director Michael Masi described the incident as “a carbon copy to what Pierre did last weekend in Spa.”

As covered here previously, Masi was the driving force behind the reintroduction of the black-and-white flag (also known as the ‘bad sportsmanship flag’, though we’re going to need a new name for that in the post-W Series era). But what is it actually achieving?

If Leclerc’s move was illegal, he should have been punished for it. If not, he should have been allowed to do exactly the same thing again. Waving the black-and-white flag at him for doing it suggests that repeating the same move would earn him a penalty, particularly when Masi has described it as ‘motorsport’s yellow card’.

The matter is complicated further by the different roles Masi and the stewards occupy. It’s a common misconception that the race director decides penalties. They do not; that is the stewards’ job. But Masi has taken it upon himself to brandish the ‘unsportspersonlike driving’ flag (suggest better alternatives in the comments, please).

“It’s ultimately the stewards’ decision if someone gets penalised,” said Masi, “the black-and-white sits with me.”

So if a driver is shown the black-and-white flag for an incident, don’t assume they won’t also penalised for it. “If the stewards feel there’s more to it they absolutely have the capability of issuing a penalty,” Masi confirmed. “They could absolutely place that under investigation of their own volition without anything from me like anything else that happens during the race.”

Like any motorsport geek I do enjoy train-spotting the lesser-seen flags of the International Sporting Code. Who doesn’t love seeing them dust off the black-and-orange ‘meatball flag’ every now and then?