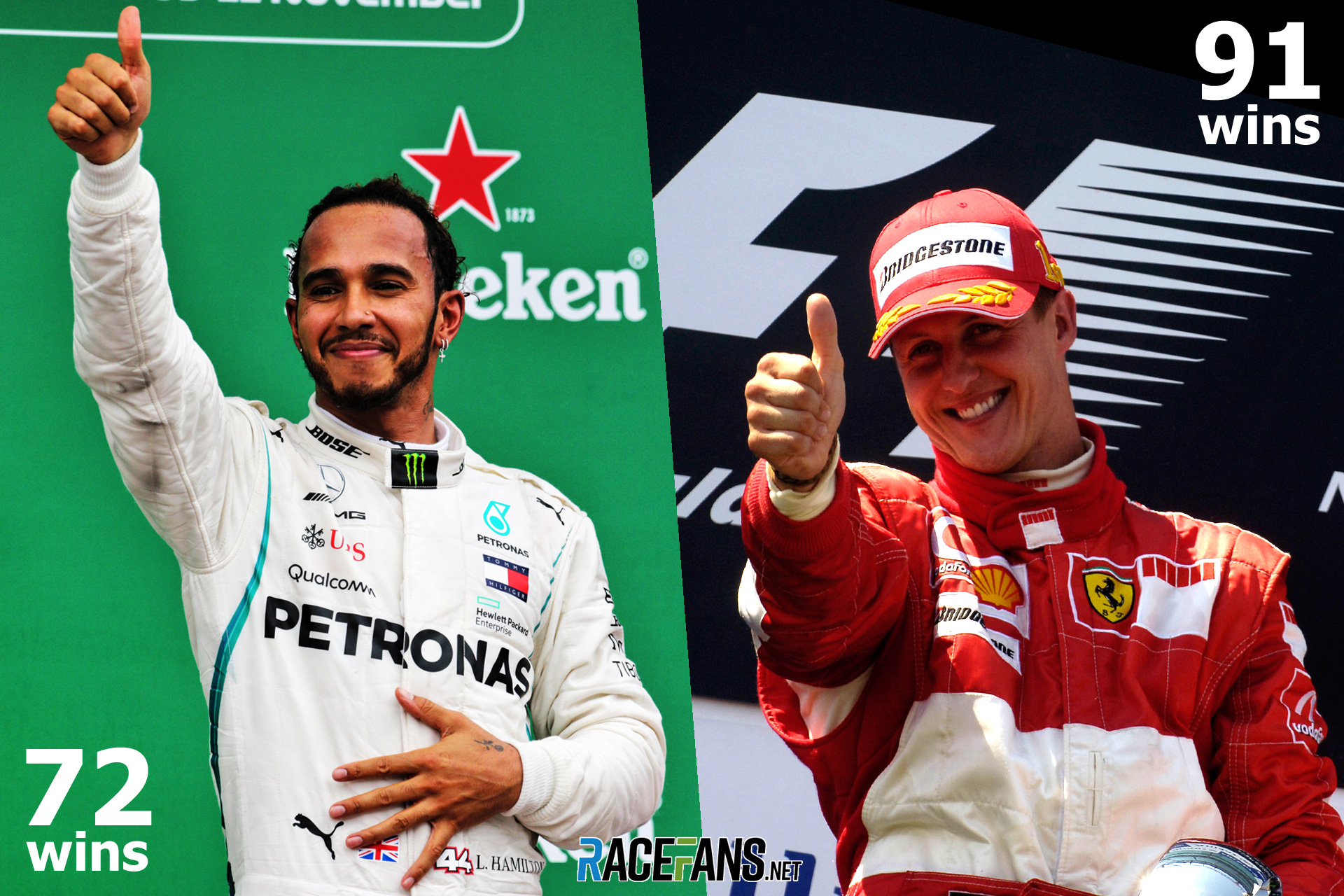 Michael Schumacher has been Formula 1’s most successful driver in terms of race victories since 2001, when he broke Alain Prost’s former record of 51 wins.

However, as noted here 12 months ago, since the V6 hybrid turbo era began Lewis Hamilton has been winning races at a rate which suggested he could reach Schumacher’s tally sometime in 2020.

Sunday’s Brazilian Grand Prix was Hamilton’s 19th victory of the last two seasons, with one race still to run this year. He signed a two-year extension on his Mercedes contract earlier this year, and if he adds another 19 wins during that time he will draw level with Schumacher’s 91.

Hamilton has surpassed his championship rival Sebastian Vettel as the driver most likely to inherit Schumacher’s mantle. Hamilton is now closer to Schumacher’s total wins tally than Vettel is to Hamilton’s:

Hamilton began the weekend by clinching Mercedes’ 100th pole position. The next team they should catch is Lotus (107), while Williams (128), McLaren (155) and Ferrari (219) also lie ahead of them. He did so with the fastest ever lap of the Interlagos circuit, over a second quicker than last year’s pole position time.

The fastest lap award increasingly looks like the consolation prize for the driver who isn’t able to make his tyres last and has to make an extra pit stop. For the second race in a row it went to Valtteri Bottas. That was the 10th of his career and it puts him level with three world champions: Mario Andretti, Graham Hill and John Surtees.

A furious Max Verstappen may have missed out on victory after tangling with Esteban Ocon, but he did finish on the podium for the fourth race in a row, which is the longest streak of his career to date. It was him 10th podium finish of the year to team mate Daniel Ricciardo’s two.

Kimi Raikkonen completed the podium. He has been on the rostrum 12 times this year, more than any driver bar Hamilton.

Finally, if Hamilton finishes on the podium in the season finale he will set a new record for most points scored in a season, beating Vettel’s 2013 tally of 397. Of course this record is heavily dependent on the points system (a win was worth no more than 10 points as recently as 2009) and the length of the calendar (2016 was the only other year which featured 21 rounds).

Have you spotted any other interesting stats and facts from the Brazilian Grand Prix? Share them in the comments.