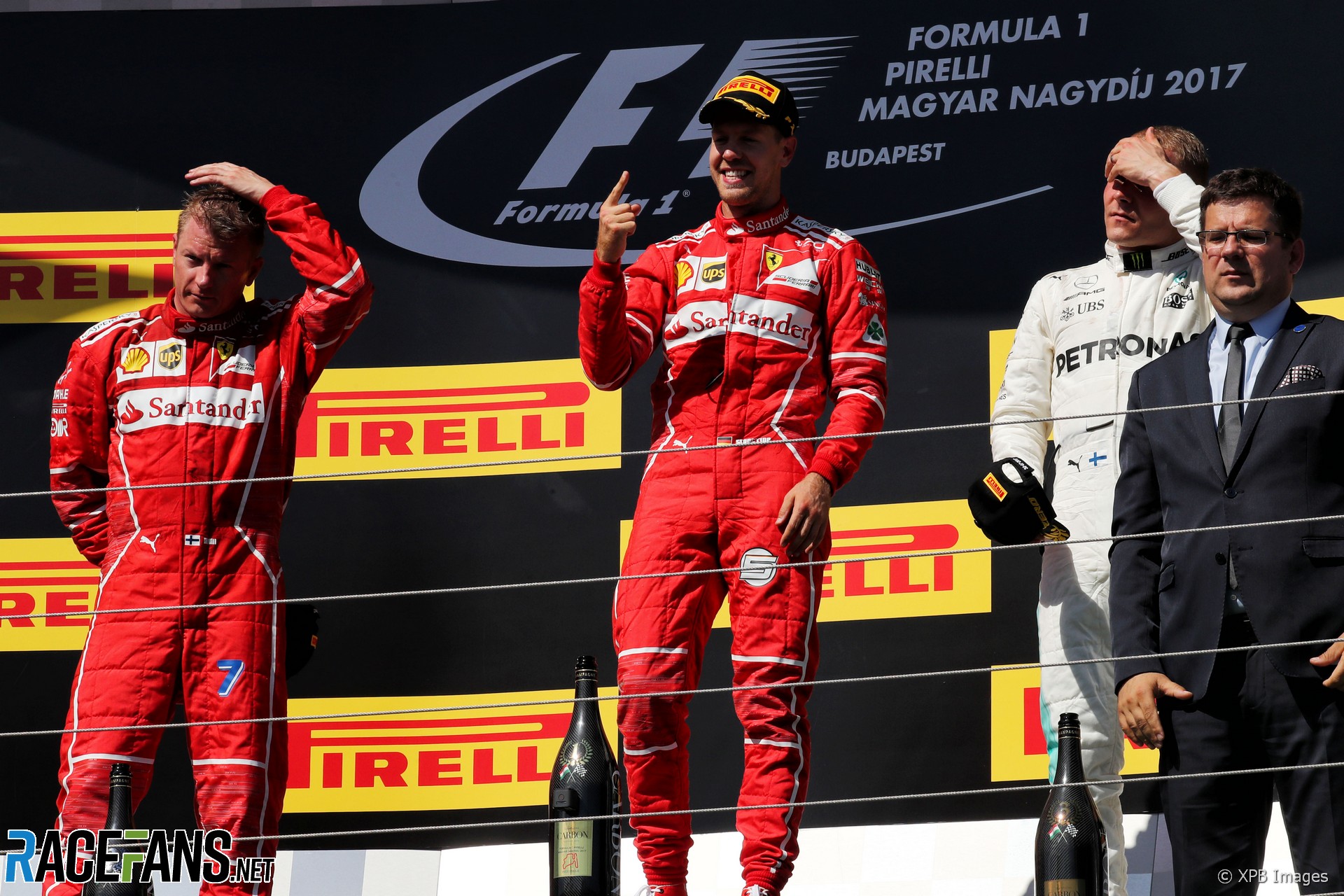 The contrasting priorities of Ferrari and Mercedes were plain to see as Sebastian Vettel extended his championship lead in the Hungarian Grand Prix.

The Ferrari driver spent more than half the race coping with a severe handling problem but was in the fortunate position of having team mate Kimi Raikkonen as a buffer between him and the threatening Mercedes.

Vettel’s greatest threat was his championship rival Lewis Hamilton, who pursued the Ferraris in the second half of the race to no avail. After that he surprisingly handed the final place on the podium to his team mate, who earlier in the race had waved him by to attack the red cars.

That handed Vettel a further three-point boost as he went into the summer break having regained the initiative in the championship.

As the field accelerated out of turn one on the first lap, Hamilton might have been relieved to learn he would ultimately finish in the fourth position he started from. He had been overwhelmed by the Red Bulls at the start and at that moment looked set to begin the opening phase of the race in sixth.

That changed when Max Verstappen made an impetuous move to reclaim fourth position from his team mate at turn two. He locked a wheel and thudded into the other RB13, inflicting terminal damage on Daniel Ricciardo’s car.

This was a woeful blunder on what had looked like being the team’s strongest weekend so far. Verstappen at least had the sense to admit responsibility afterwards (something the man he replaced at Red Bull failed to do at Silverstone two weeks ago) but this was scant comfort for Ricciardo.

The Red Bull pair had gone into the race with a set of untouched super-soft tyres ready to wield in the closing laps. But with Ricciardo out and Verstappen copping a ten-second time penalty for the blunder, their threat was blunted. Meanwhile a relieved Hamilton knew he was on course for at least fourth place. But could he do better?

Hamilton’s chances received a boost on lap 11 when Vettel’s lap times began to rise. Ferrari had discovered a problem with his steering before the race began and it was now beginning to affect his driving, particularly on the Hungaroring’s demanding series of fast inter-connected corners.

“It was very tricky,” said Vettel, “left-handers to right-handers and then if it keeps changing to adapt. I did try to adapt and I obviously knew that we can’t change it.”

Vettel’s lead over Kimi Raikkonen in second place peaked at just under three-and-a-half seconds, then began to fall. Raikkonen gradually closed the gap until by lap 29 he was hovering just outside of DRS range.

Vettel’s problem was a setback but it was far from debilitating. Valtteri Bottas in third place made next to no impression on him until the final laps of his stint.

Ferrari faced a straightforward dilemma: Keep Vettel ahead through the pit stops or allow Raikkonen to jump ahead of his team mate? The former was obviously preferable from a championship point of view as Vettel arrived in Hungary with more than twice as many points as his team mate.

Arguably it was also the sensible thing to do to give them the best chance of scoring a one-two in the race, as Raikkonen could protect Vettel from any threat from behind. Whichever argument tipped the debate, Vettel stayed ahead because Raikkonen was brought in to the pits immediately after him. “I had the speed to stay out,” Raikkonen grumbled on the radio, no doubt remembering this was exactly how Vettel had been allowed to beat him in Monaco.

Hamilton goes after the Ferraris

Once the drivers had completed their first and, for the most part, only pit stops, Hamilton had regained his fourth position and was rapidly closing on his team mate. Hamilton had wanted to extend his first stint but was unable to tell his team due to radio problems.

His pace remained strong after changing to the softs and now he was bearing down on Bottas. To his relief, Mercedes solved their radio trouble and Hamilton was able to urge them to swap positions between their cars.

Mercedes allowed him through on the condition that he would give Bottas his position back. Hamilton quickly got after the Ferraris, taking up to seven-tenths of a second out of them per lap.

But once he got a second away from Raikkonen his progress slowed to almost nothing. Even when he got within DRS range of the Ferrari the Mercedes never threatened a pass. Raikkonen often had the benefit of DRS from his team mate, keeping him safe on the Hungaroring’s short straights.

In front of them Vettel was continuing to manage his ailing machine. “I tried to save the car, we spoke a little bit on the radio about it.”

“I was talking through the problem and they told me to avoid the kerbs, which I was doing already, but on a track where you use the kerbs nearly on every corner it’s obviously also compromising your performance.”

It gradually became clear that unless Vettel’s problem dramatically worsened the running order was unlikely to change. And so it proved. Then on the final lap he received an added bonus courtesy of his closest championship rival.

Bottas had been told to stay close to his team mate so Mercedes could swap the positions back if needed. But having been two seconds behind Hamilton on lap 56, Bottas slipped back quickly thereafter and was increasingly under threat from Verstappen.

As the final lap began Hamilton was almost eight seconds ahead of Bottas, while Verstappen was almost within DRS range of the second Mercedes. Hamilton could have used the threat of the Red Bull behind as justification for not giving his place back to Bottas.

But surprisingly he went through with it. Hamilton backed off his pace to a huge extent, taking over a minute and a half to complete his final lap, and let Bottas through into third at the final corner while keeping Verstappen tucked up behind.

It was a commendable act of sporting integrity which had a real cost to Hamilton. He’d arrived in Hungary one point behind Vettel in the championship, and letting Bottas through boosted his rival’s advantage by an extra three points.

Alonso ‘best of the rest’

The first five cars arrived home within 13 seconds of each other. After that there was a wait of almost a minute for the only other car still on the lead lap: Fernando Alonso’s McLaren.

The two-times champion delivered another bravura performance to claim ‘best of the rest’ honours at a track where the disadvantage of McLaren’s Honda power unit was minimised. He spent the first half trying to get past Carlos Sainz Jnr, then followed the Toro Rosso into the pits for their only pit stop. He pounced once they rejoined the track, sweeping around Sainz on the outside of turn two.

Behind Sainz came the two Force Indias despite the pair once again making contact. Stoffel Vandoorne ran long in the first stint in a fruitless bid to get in front of the Force Indias. He nonetheless claimed his first point of the season with tenth place, taking the chequered flag right on Esteban Ocon’s tail.

Daniil Kvyat and Jolyon Palmer were promoted to 11th and 12th after Kevin Magnussen was given a five-second penalty for elbowing Nico Hulkenberg aside in turn two. Hulkenberg, whose race had already been ruined by a slow tyre change, later retired in the pits.

Only two other drivers dropped out following Ricciardo’s exit. Romain Grosjean arrived in the pits early due to a loss of air pressure in a tyre, then was sent back out with a cross-threaded wheel nut and had to stop.

Paul di Resta, who did a commendable job after taking Felipe Massa’s place in time for qualifying without having practiced, was called in with ten laps to go. Williams later said they had seen a drop in oil pressure. As Di Resta wasn’t classified, the team will be able to fit a new gearbox for the next race without penalty.

Vettel leads into the summer break

The pressure had built on Ferrari ahead of the Hungarian Grand Prix. Hamilton had reduced Vettel’s lead to a single point.

But at a track which suited the Ferrari well Vettel shrugged off his handicap and took maximum advantage. While Ferrari demonstrated a clear preference for the contest between their drivers, Mercedes showed an even-handedness which could come back to haunt them.

Hamilton gave up three points in Hungary. He lost last year’s title by five. But after the summer break come a pair of high-speed tracks where he surely expects his Mercedes can overwhelm the Ferraris.