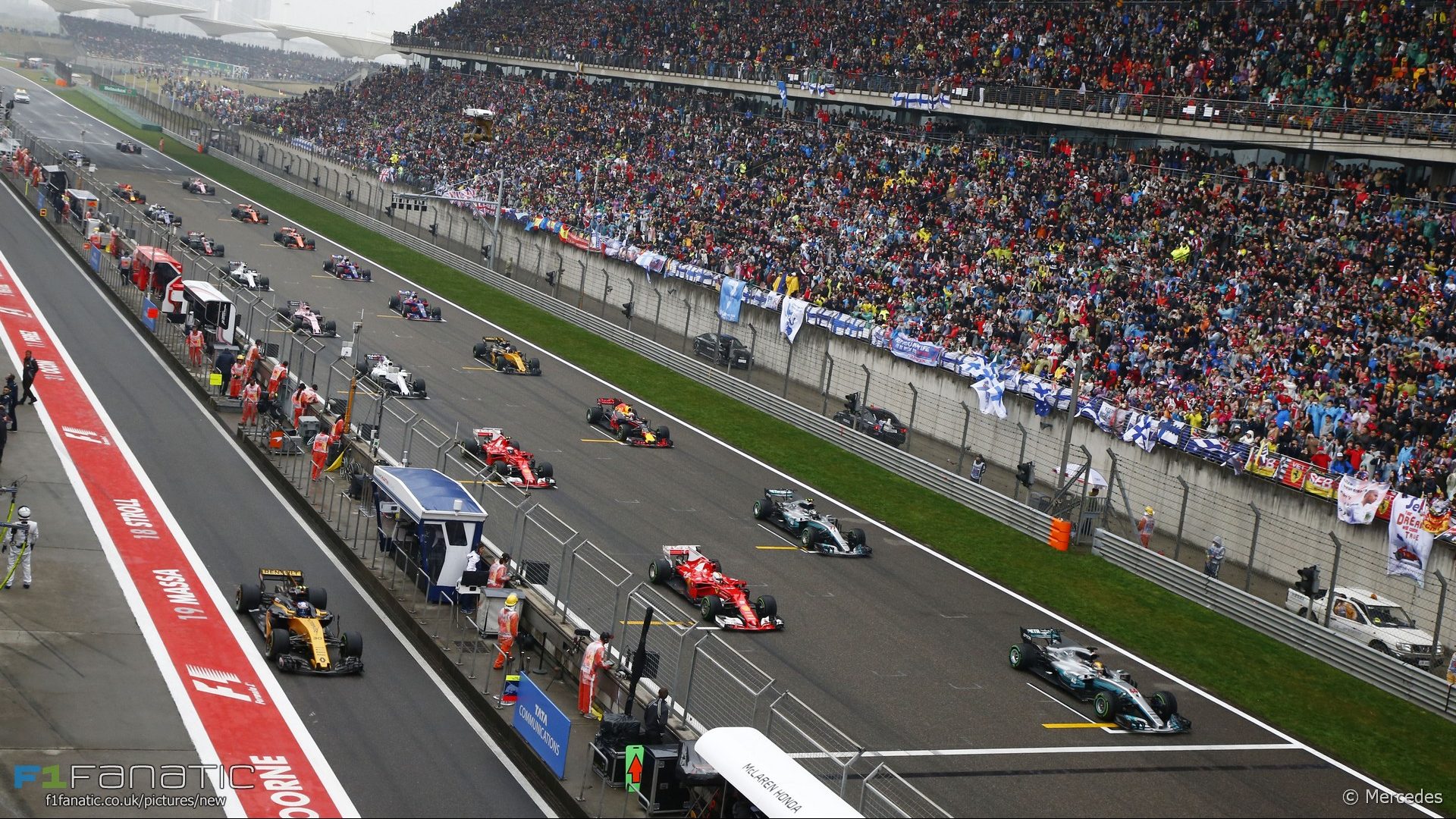 The difficulty of overtaking was the big talking point after Melbourne. But the Chinese Grand Prix seemed to show that passing is still possible in 2017.

F1 Fanatic readers gave the race an average rating of 7.53 out of ten. However this is well below the scores for the 2011 and 2012 races at Shanghai, both of which feature inside the top 15 races of the last ten seasons.

Here’s what you had to say about Sunday’s race:

The Chinese GP was a definite improvement on the opening race of the season in Australia, historically this circuit has shown to be more overtaking friendly and the wet conditions at the start also helped.

Sadly there wasn’t a fight for the race win, after Hamilton retained the lead at the start and after the field changed to slick tyres he was never troubled and it appeared that he was just managing his pace later on and was only going as fast as he needed to.

With the way the pack was shuffled early on after the stops to change to dry tyres and the safety cars periods Vettel was never in a position to challenge Hamilton during the race as by the time he regained second the gap to Hamilton was too big, so we didn’t get to see the two of them racing together during the Grand Prix.

Although the winner never seemed in doubt there was action behind and whether it was due to the track or the conditions, we did get to see some overtakes under the new regulations this weekend, and while the quantity may still have been down on recent years I thought the quality of the moves was up on recent seasons.
@PJA

This was I think a 100% of what these regulations can produce. Even my girlfriend watched it, despite not watching F1 for over ten years.

Vettel bolting one on Riciardo, stomping pressure on Verstappen.

At no point did I get a feeling this could be a better race. Best part? DRS seemed to be not working.

Also Red Bull and Ferrari seem to be good at following a car in front.
@Jureo

But one person’s thriller is another’s tedious procession:

Incredibly boring most of the time. The race felt slow, dull and there we were robbed of a fight for the win. Thoroughly disappointed.
@Me4me

And some of you wondered whether the race would have been as good if it hadn’t rained before the start:

The race was definitely helped by the damp/overcast conditions. There was some close racing which was quite suspenseful and some non-DRS overtakes. Overall I was pretty pleased but there’s room for improvement.

I also have this sneaking suspicion that things may be not quite as close as they currently appear, given a few more races. I still think it’s advantage Mercedes with Ferrari not quite there.
Phil Norman (@Phil-f1-21)

But a recurring view among your comments was that compared to the huge amount of overtaking in this race last year, it’s no bad thing that overtaking has now become more difficult.

Loving the ‘new’ F1. Racing is racing again. Overtaking is an art rather than a right. The cars can seem to follow each other due to the harder tyres. DRS is working as a slipstream (as it was originally intended).

Anyone with a short attention span complaining about a ‘boring’ race worries me. I sincerely hope the FIA doesn’t make a snap decision and extend the DRS zones for the remainder of the season. It’s absolutely unnecessary. The drivers are actually trying moves in the non-DRS zones!

Wasn’t a classic, but the overall feel of F1 2017 is such a huge improvement on the past few years. It feels positive, it feels racey!
@ecwdanselby

And others felt the quality of the race wasn’t reflected in how it was broadcast.

One of the worst camera / director jobs ever.

Zoomed in too close all the time, you get no feeling for the speed or the circuit whatsoever. Hardly any coverage on the midfield battles or the pit stops. The odd overtake we were shown was as replays, no tension building up as when you would see a car edging closer lap after lap.

That’s what I enjoy most watching a race, and i’m glad these kind of battles are back for 2017. Now just show all of them!

It would also have been a better race without DRS. It either didn’t work at all (Red Bull vs Ferrari) or too much (McLaren vs Mercedes).
@Jon-thereyougo

I really enjoyed that race. Not knowing who would have the pace to finish where, the tyre quandary at the beginning, the classic strategy choice of whether or not to pit for fresh tyres and go faster or to stay out, and then at the end not knowing who was going to manage to catch up and overtake who.

Oh, and proper overtaking being done! And the happy drivers at the end, saying how much they enjoyed it and being friendly with each other (we’ll see how long that lasts).
@Hey

*Potential* for a classic Grand Prix this morning #SkyF1 #ChineseGP

2017 #ChineseGP turning out to be a potential classic.

F1 is kinda interesting again now. Might start watching it again.
After years of monotonous and unimaginative nonsense

It was a nice #ChineseGP, thanks to the damp track. A good #Hamilton, an amazing #Verstappen, #Ferrari confirms to be competitive.

Basically Formula One is brilliant this year unless like me you support McLaren Honda. #F1

We wanted to get rid of silly rules, but the reprimands for Ricciardo and Perez take the biscuit, are we at school or something? #ChineseGP

The #ChineseGP was a very awesome grandprix

Great race #ChineseGP good to see 3 different cars and 3 top drivers on the podium. And all the better without whineberg

Blue flags should not have been given to @RGrosjean. RB was not close enough. Something wrong with #f1 if cars effected from that distance.

The 2017 #F1 cars look great. Shame the racing is still as dull as it has been for the last few years.

I dont know why everyone is hyped about #ChineseGP It was boring! New ruleset is an absolute killer for overtaking and stratgies #Formula1

When will @F1 start using the term "Rubbing is racing"?

A good metaphor for #F1 in 2017 at the #ChineseGP – Hamilton & Vettel way out in front, with the next 4 bunched up close together behind

#ChineseGP was ok.but my fear for the year merc, ferrari and bulls doin simular lap times like today then races will be decided on pitstops

Looks like this year of #F1 is going to be a good one!

This F1 season looks like it's going to be close. Hamilton vs Vettel, the early impression is. McLaren… Please get the Mercedes engine.

Old school #ChineseGP today. All about quality, not quantity – as #F1 should be. Quality driving, quality overtakes. More please #bbcf1

Well I can firmly say – what a waste of my Sunday morning! #F1 #F1inChina #f1sky

Could be a pattern for the season that Merc have the one lap pace and Ferrari can match their race day speed. Great season ahead #F1

I know Mercedes won again today, but it's great to see #F1 being much more competitive at the front this year! #ChineseGP #Formula1

Just caught up with the race. Don't know what anyone else thought but I really enjoyed that.

The podium and post-race room today at Shanghai was the friendliest and nicest I’ve seen in a very long time!

I don't care what people say about F1 being boring that was a good race. China is a great track for overtaking though

Some great overtaking in this race! #F1

A lot of intense overtakess in a long time at the #ChineseGP. The win was predictable, but everything else not so much #ForzaFerrari #F1

Never been a a big fan of the #ChineseGP but today was OK. Got rid of Sky and #C4F1 is decent.

I turned off the #ChineseGP way before it ended, as watching almost anything else is more exciting…

Great to see three constructors on the podium. Rare thing these days. #F1

Just caught up on the #ChineseGP! Decent race, looking forward to another close and entertaining GP next time out in Bahrain. #F1

Well that was a better race than Australia. Rain will do that. Even so, it seemed easier to pass today, even in the dry. Good sign. #f1

Great race today, already can't wait for next weekend! Not sure about Vettel getting away with start position #ChineseGP #F1 #verstapen

Sadly the Chinese Grand Prix was a bit boring….but was a good result all the same. #F1

Congratulations to the #ChineseGP organizers & crew for a great #F1 race today! 3 separate podium teams with lots of overtaking 🏎🏁😎 #fb

2 races down, still not had an interesting one yet. Hopefully Bahrain will be. Don't like new wide cars and improved tyres . #ChineseGP

Really enjoyed today's #ChineseGP. Plenty of great battles and proper overtakes! Looks like it's going to be a great season. #F1

Well that GP did nothing for me today..#ChineseGP

The #F1 GP was only interesting due to a wet circuit and a rookie crashing into the start/finish straight. Can't wait for the @FIAWEC :)

All square at the top of the standings then, I know it's only 2 races in but I think we have a championship on our hands people #F1 😀😀

God I'm glad they've made such significant changes to the cars and F1 protocols. Chinese GP was indistinguishable from 2016

What a race this was! #ChineseGP

So the F1 is still as predictable as the last few years.

Any of you people watch #F1? Because it was a good race today.

Caught up #ChineseGP & damn that was exciting! That wheel2wheel b/w Ric & Vet – Mindblown! Enuf's been said abt Verstappen but #respect #F1

Finally we might get to see a close season in F1.

The F1 yesterday was really good. The new cars have made it a much better product. It is a lot more visceral now.

F1 has become so boring and the cars are ugly ☹️

Rate the Race appears immediately after every grand prix finishes. To join in simply register a free F1 Fanatic account. If you do not have one, register an account here or read more about registering here.