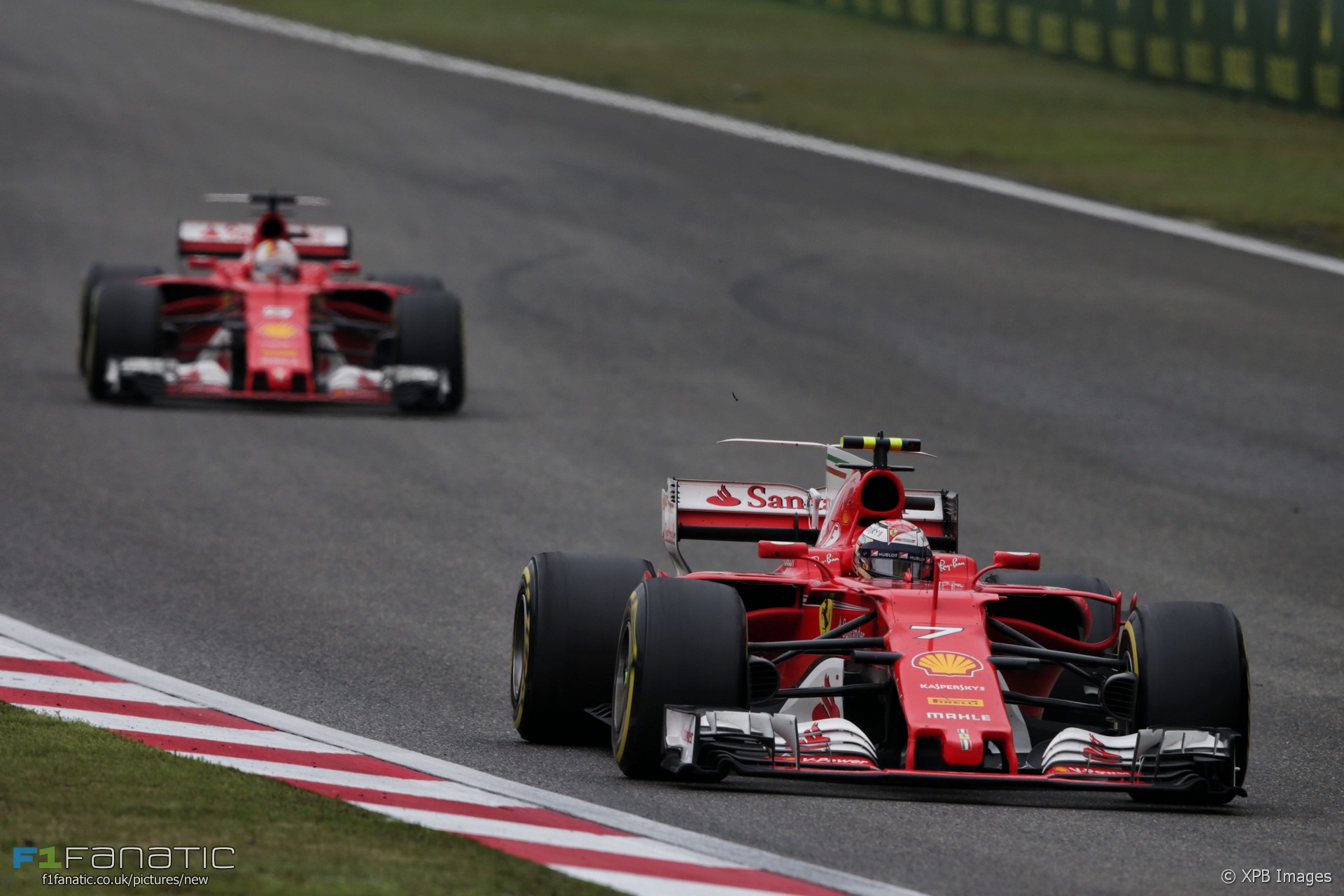 There were mixed feelings for the Ferrari drivers in the Chinese Grand Prix.

Sebastian Vettel said it felt like they were quicker than Mercedes, but Kimi Raikkonen disagreed with his team’s strategy and urged a change.

Fernando Alonso also endured a frustrating race and didn’t hesitate to point out he had several quicker cars behind him at one stage.

To Alonso: “Fernando be careful in turn 11 some are reporting there might be oil there.”

To Alonso: “Everyone on inters except for Sainz. He is on the option [super-soft].”

To Hamilton: “The important thing is to get to the transition point, the inter-to-dry-point. We suspect that will be lap 6.”

Vettel: “It has dried up quite a bit.”

Alonso: “It is more dry than the laps to the grid.”

Sergio Perez tangled with Lance Stroll while Max Verstappen made an incredible start, moving up nine places to seventh.

Alonso: “I don’t need [censored by FOM] drinks! There is enough concentrating to keep the car on the track.”

A heavy crash brought out the Safety Car.

Hamilton: “It’s very hard to keep these temperatures up.”

Raikkonen: “I don’t know what happened with my engine. I have zero torque.”

To Hamilton: “Ricciardo on super-soft, 48 laps remaining, he won’t get to the end on that tyre.”

Alonso drew attention to how slow his car was down the straights.

To Perez: “Last lap you were nine-tenths faster than Alonso ahead on softs.”

To Hamilton: “So Vergne now the car behind.”

Raikkonen: “What the hell is happening on exit of 12? I have no power if I don’t push the K1.”
“Understood, I’ll check.”

Ericsson: “The rear tyres are having some degradation. I don’t see us going all the way with these tyres.”

Hamilton: “We’re going to go to the end on this tyre, right? It’s quite harsh on this front-left tyre.”
“Copy, we’re flexible.”

Raikkonen: “Do we really feel like the tyres will last to the end of the race because it doesn’t feel like it. I am sliding because I’m close to the car. If we have to stop it’ll probably have to be soon.”

To Verstappen: “Sebastian last lap 47.5. It was a struggle for them to pass Daniel, took a very long time. You are 4kph faster in a straight line.”

Alonso: “Has Bottas had some car damage? Or he’s running normal pace?”
“No damage that we’re aware of. Our pace is a little bit better than we expected.”
Alonso: “How he can be behind us? Unbelievable.”

Hamilton: “These tyres are starting to slide around a lot more.”

Ricciardo: “If Max has problems with his tyres just don’t let me fall into Kimi.”
“Understood.”

To Verstappen: “Nice job. Tyre wear was not the limitation last stint, it was cold front tyres.”

To Ricciardo: “OK Daniel so update. Hamilton has now stopped as well. That leaves Raikkonen as the only one-stopper. He will lose a few positions if he stops, so he’s likely going to go to the end. You probably will catch him in about ten laps.”

To Bottas: “Fastest lap of the race, good job.”

Ferrari believed Raikkonen could beat the Red Bulls if he avoided pitting, but their driver wasn’t convinced.

Raikkonen: “Why didn’t you stop when I asked you? Then if we know that we’re going to stop two times probably everybody else apart from me.”
“We think this is the best chance is to go to the end. Copy on your message though.”
Raikkonen: I have so poor front end [censored by FOM] they’re just going to catch me so easy. I cannot push in the front. So where are we going to finish? I have no front end and it’s 20 laps to go. So…”
“Our current prediction is P3 if we don’t stop. We think Seb’s going to come through but the others will be behind.”

Raikkonen: “How much faster the guys are behind?”
“So Vettel did 36.9.”
Raikkonen: “We’re almost three seconds slower and you still think it’s good to stay out? It’s only going to get more worse.”
“Understood. Verstappen 37.6, Ricciardo 37.6.”
Raikkonen: “It’s still 18 laps to go and the front is already seriously bad. Really bad on the left front.”
“Understood Kimi, understood.”
Raikkonen: “Because somebody else behind even the Red Bulls will pass us we don’t stop. Come on.”
“Box this lap, Kimi, box this lap.”

Verstappen: “They just don’t move out of the way.”
“Copy. You’re going to have to put some energy into the front tyres, keep them alive.”

Mercedes were having trouble getting some drivers’ names right.

To Bottas: “So we still have potential for P4 here, Nico. Er Valtteri.”

To Perez: “Box this lap, pit confirm. Our pit window is clear.”

Verstappen: “Can you please keep telling Charlie this is pretty ridiculous.”

Hamilton won but Vettel felt he could have run the Mercedes closer.

“Get in there, Lewis. That’s a great race mate. Absolute masterclass. Really well managed mate. really good job..”
Hamilton: “Well managed from you too man. Thank you so much for all your efforts guys. Everyone has really worked hard for this. Got to keep pushing.”

The full race radio transcript will be published later this week.