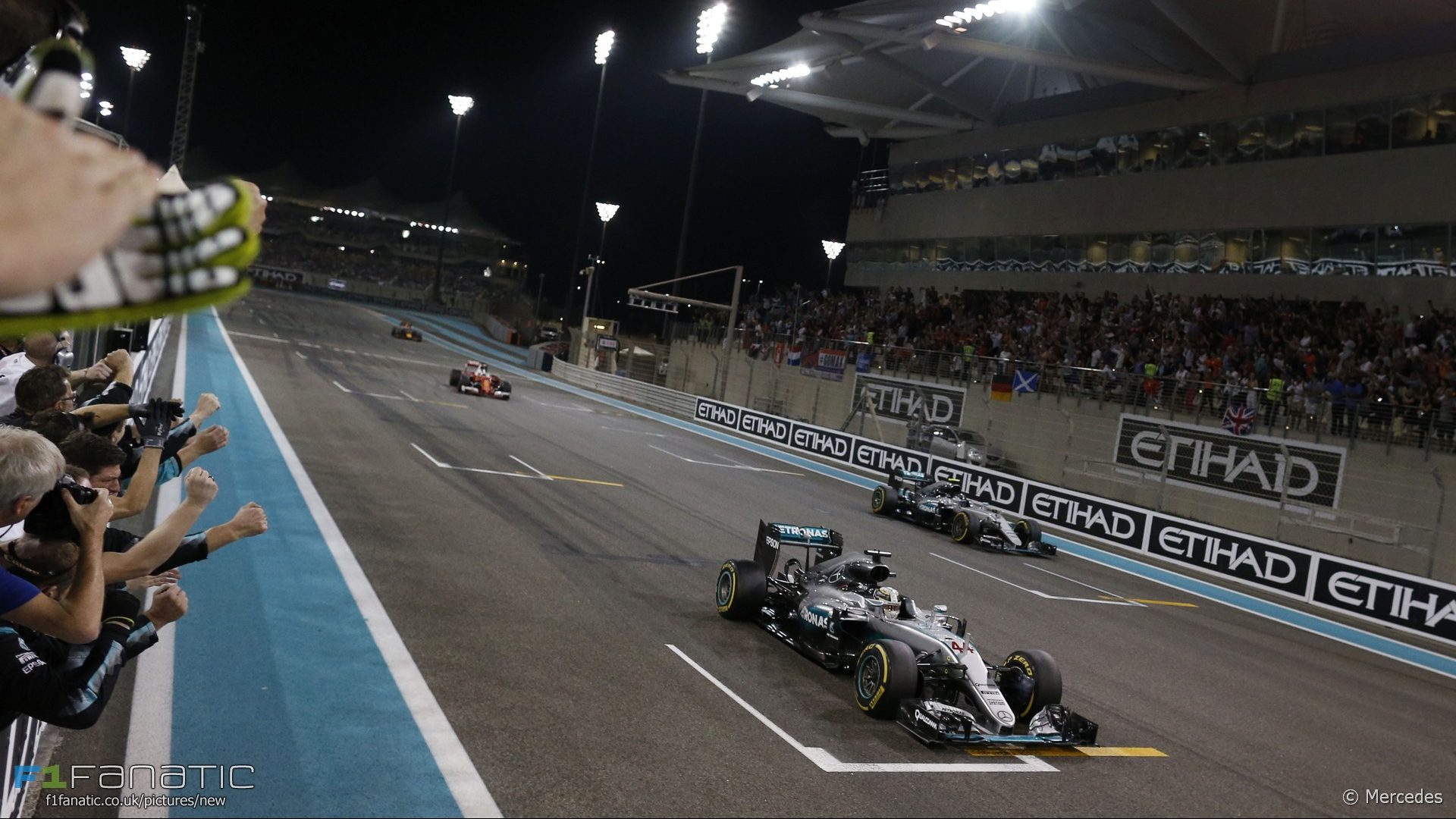 With 2016 almost behind us, now’s the time to revisit a selection of the best and most popular articles from F1 Fanatic this year.

Does Lewis Hamilton spend too much time flying around the world to concentrate on his racing? This article from early in 2016 scrutinised just how demanding Hamilton’s schedule out of the cockpit was.

A major theme of 2016 was how Max Verstappen’s rivals became frustrated with his defensive tactics, prompting an examination of what they were objecting to and how the FIA might intervene.

No wonder FOM arranged Baku to clash with Le Mans

Bernie Ecclestone was known to be unhappy that an active F1 driver had participated in the Le Mans 24 Hours last year. So it was little surprise to see 2016’s newest addition to the calendar prevented a repeat.

A novel perspective on the 32 drivers who had claimed the championship at the time of writing. Since then we’ve seen the 33rd driver crowned champion, so look out for an update in the new year.

What race attendance figures tell us about the state of F1

Formula One’s television audiences may not be great (see below) but race attendances have been fairly good.

Side-by-side: How the 2017 rules will change F1 design

Technical insight from Will Tyson into how the cars will look following their 2017 transformation.

F1 Fanatic revealed the first pictures of McLaren’s 2016 racer. It proved to be a substantial step forward for the team after a difficult 2015.

One of the most controversial developments of the season involved plans to introduce new head protection systems. The proposal was dropped for 2017 but remains on the cards for 2018.

However these much wider tyres are on their way for next year.

Monza is evaluating an even quicker layout.

What would a road car look like if it was designed by Red Bull’s Adrian Newey? Wonder no longer – the AM-RB 001 shoult hit the track late next year.

One of the biggest news stories to break in F1 for years. Nico Rosberg announced his retirement from Formula One just five days after he won the championship.

It had already been a seismic year for driver market developments as Red Bull rejigged their line-up just four races into the season.

F1 has lost one-third of its TV audience since 2008

Amid a slew of other more headline-grabbing remarks, Bernie Ecclestone revealed just how bad F1’s viewing figures have become. As a result, this telling detail was widely overlooked.

Despite those plunging numbers F1 is showing no sign of reversing its more to pay television. British viewers will wave goodbye to free-to-air coverage in three years’ time.

Daniil Kvyat’s ejection from Red Bull was set in motion when he triggered a first-lap crash at his home race which caused his team mate’s only non-score of the season. Daniel Ricciardo later revealed his team had avoided letting him know who was really to blame during the race.

A controversial Mexican Grand Prix saw Max Verstappen stripped of third place before the podium ceremony. Sebastian Vettel went up onto the rostrum in his place but he too collected a sanction, handing third to Ricciardo.

A season-best fifth place for Romain Grosjean wouldn’t have happened had it not been for the actions of one quick-thinking Haas mechanic.

Lowe refused to give Hamilton a second order to speed up

Mercedes’ technical director Paddy Lowe instructed Hamilton to stop holding Rosberg up in Abu Dhabi but refused to repeat the command because he realised it was futile.

Formula One’s six-year experiment with ‘designed to degrade’ tyres is over – in theory, at least.

Before the season began more people thought Vettel would win the title than Rosberg. How accurate were your predictions?

Hamilton and Rosberg crash: Who was to blame?

The collision between the two Mercedes drivers in Spain split opinion right down the middle.

Who should Mercedes hire to replace Rosberg?

The most coveted seat in Formula One opened up at the beginning of December.

When did F1 last have a grid this good?

Did the 2016 season represent a high in terms of the quality of the driver line-up?

Should the FIA ban the ‘Verstappen block’?

Verstappen’s defensive tactics divided those who felt he’d gone too far from those who praised his tough racing.

Is Rosberg a deserving world champion?

Unreliability was widely seen to have played a role in deciding the 2016 championship.

Which qualifying system should F1 use?

This was a staggeringly one-sided debate. Almost no one wanted to use the new elimination qualifying format.

Was Hamilton right to hold Rosberg up?

Hamilton’s attempt to help his rivals pass Rosberg in Abu Dhabi were viewed by some as being unsporting.

A gem of a video showing Ayrton Senna and a grid of champions and other F1 aces racing in identical Mercedes on the Nurburgring in 1984.

Why aggregate qualifying was dropped the last time

The elimination qualifying farrago brought to mind a previous experiment with a radical and unpopular format.

Thirty years ago another pair of team mates were battling for the championship.

One of the great championship battles began 40 years ago.

The track which is now the Red Bull Ring used to be a beast of a venue. The 1986 race was its penultimate edition before the circuit was overhauled.

“Something or someone doesn’t want me to win this year.”

“What am I supposed to do? Sit there and let the dude win the championship?”

Your verdict on the best races since 2008.

Raikkonen warns Verstappen will cause “a big accident”

“If I wouldn’t have braked I would have hit him full speed on the rear when we are in the full throttle.”

Furious Vettel tells Whiting to “**** off” after Verstappen clash

A livid Vettel laid into F1 race director Charlie Whiting at the end of the Mexican Grand Prix.

Rosberg given penalty points for forcing Verstappen off

Rosberg didn’t get an easy ride from the stewards on his way to the title. In Germany his driving was deemed at fault…

…while at Silverstone he became the first driver to be penalised under the short-lived radio restrictions.

Did Hamilton’s unreliability stop him winning the title?

Hamilton certainly felt he’d been hard done by when it came to mechanical faults.

An essential read from Damon Hill

This frank and funny account by the 1996 world champion is essential reading.

Formula One fans hankering after a management sim finally have somewhere to turn.

Have you taken our three newest quizzes yet?

A selection of topical lists from the year just gone:

The final word on all 21 of this year’s races.

What are your favourites from 2016 on F1 Fanatic? What would you like to see more of next year?

Have your say in the comments.