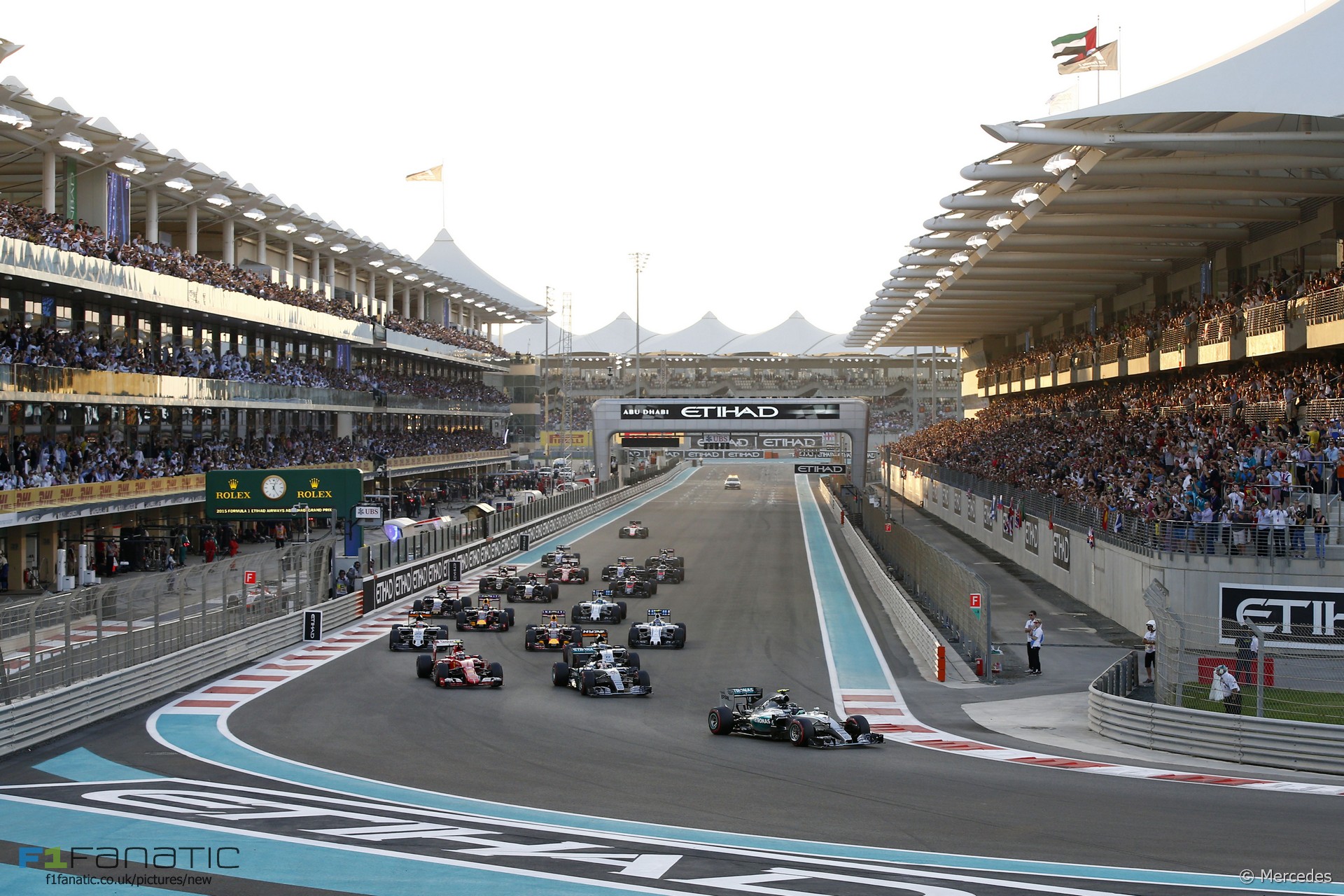 Sometime after the sun sets over Yas Marina on Sunday we will know the outcome of this year’s world championship.

Will Formula One welcome Nico Rosberg to its roster of champions? Or will Lewis Hamilton become the fifth driver to claim a quartet of titles?

While the focus will inevitably be on the two title contenders, the 20 other drivers they share the track with could influence the outcome one way or another. There are many obstacles and challenges ahead which could still swing the balance in favour of either driver.

Rosberg will try to treat this weekend as any other despite the inevitable tension and added pressure that comes with being the favourite. His objective is simple: finishing on the podium will secure him the title no matter where Hamilton ends up.

The memory of the 2014 title-decider will undoubtedly weigh on his mind. He was behind Hamilton in the points and on the track when power unit failure ended his chances. A similar scenario this weekend would swing the title outcome at the last moment.

Last year Rosberg took pole position and managed the race effectively to lead Hamilton home. Out-qualifying Hamilton, which he has done the three times they have come to this track as team mates, would give him a crucial advantage. DRS notwithstanding, overtaking has proved difficult at this circuit in previous years.

However Rosberg faces a more motivated team mate than he did 12 months ago. Hamilton’s crushing win in Brazil showed he is at the top of his game.

The first hurdle for the duo is to stay out of trouble in first lap, with the accident hot spots being the first corner and the tight and twisty turns five, six and seven. Any contact damage could spell disaster for either driver. Whoever ends the first lap on top is most likely to go on to take the victory.

Ferrari do not have fond memories of Abu Dhabi: Fernando Alonso’s 2010 championship defeat was a bitter experience. Recent visits to the marina have been more fruitful, with a third and fourth place finish in 2015.

This year they are likely to face much stiffer competition from Red Bull for the final podium place, but both drivers have taken victories in Abu Dhabi and tend to perform well here.

Unless they pull off a shock on Sunday the team face their second win-less season in three years. This will be of deep frustration to president Sergio Marchionne. They will focus the off-season at diffusing the tension behind the scenes and hope to hit the ground running with the new car and regulations for 2017.

The key to a good lap time here at Yas Marina to keep the tyres alive through the first two sectors, then not overheating them in the final twisty section of the circuit. The Red Bull chassis should bring benefits, while the very slow corners leading onto the straights should provide them with some protection as they will lack ultimate top speed compared to their rivals.

The team secured second in the constructors championship in Brazil and their sole aim this weekend will be trying very hard to spoil the party at Mercedes and nab a third win.

With tyre management being a critical factor at this circuit, Daniel Ricciardo stands the best chance of taking the final podium place, which would restore some confidence after being outshone by his younger team mate in Brazil.

After his emotional send-off in Brazil, Felipe Massa will end his Formula One career at his 250th race in Abu Dhabi, a tally only seven other drivers have exceeded. He will be hoping to continue his run of form at Abu Dhabi, having finished in the points every time he has visited the circuit.

However Williams underperformed at Abu Dhabi in 2015, with Massa finishing 8th and Bottas 13th after colliding with Jenson Button on the way out of the pit lane, necessitating a costly front wing change. It doesn’t bode well for their slim chances of overhauling Force India in the championship.

It will take a significant upset for Force India to lost their hold on fourth place in the constructors’ championship. They lie 27 points ahead of Williams coming into the final race.

Yas Marina has been a happy hunting ground for Force India. They ended 2015 with their best result of the year at the track, taking fifth and seventh. The secret to their success here is tyre management, where Sergio Perez tends to shine.

Nico Hulkenberg will depart the team for a second time after this weekend as he heads to Renault for 2017.

The smooth surface of the Yas Marina circuit should help Renault, who have struggled on more bumpy tracks this season, but their general lack of power will hinder them on the long straights.

Against expectations, Jolyon Palmer has secured a return for 2017. His strong form in the second half of the season compared to his team mate has undoubtedly helped his cause and he will be keen to end the season on a high. In GP2 he retired more often than he saw the flag at Yas Marina, but his two classified finishes were in second place in feature races.

With a stable driver line up for next year and no threat from behind in the constructors, Toro Rosso will be pushing to make the most of their last race with their outdated Ferrari power unit before switching back to Renault next year.

If they manage to find 13 points they could pass McLaren in the standings, but at this circuit that could be a tall order for them.

The impressive drive by Felipe Nasr at home, which earned the two points Sauber craved to take tenth in the standings from Manor, has energised the team. It would be a surprise if they or their closest rivals managed to score at a track which seldom produces surprises.

Despite Nasr being the saviour of Sauber, it came as no shock that Marcus Ericsson was signed to continue with the team in 2017 with the strength of his financial backing and connections to Longbow Finance who own the team.

Button has been counting down the sessions until his sabbatical, clearly weary of the pressure that the F1 circus brings. It remains to be seen whether he will return, but Alonso’s recent comments suggest a door may open for Button in 2018.

However Button’s priority will be to get on top of the set-up problems which plagued him at Interlagos. He will need to make the most use of his final practice sessions to best prepare him for a good send off in the race. Abu Dhabi is not best suited to the McLaren-Honda package with very few high speed corners to make use of their aerodynamic strengths.

Jordan King will take over practice duties at Manor for a second time. The GP2 racer will drive Esteban Ocon’s car in first practice. With Ocon heading to pastures new, King has an opportunity to inherit a place at the team for 2017.

The team’s chances of out-scoring Sauber by two points this weekend to reclaim tenth in the constructors’ championship appear very slim. The loss of performance based income next year, valued at several million dollars, will be a blow to them. They have denied it could influence their choice of drivers for next year, but Rio Haryanto must fancy his chances of a comeback given recent developments.

Charles Leclerc was due to take over driving duties in FP1 but a change in schedule for the weekend sessions meant that he has had to forfeit the opportunity in order to concentrate his efforts on securing the GP3 title.

Haas are able to optimise their tyres in cooler temperatures, as shown by Romain Grosjean’s impressive seventh place in qualifying for the Brazilian Grand Prix. Both qualifying and the race at Abu Dhabi are run in the cool of twilight rather than the searing daytime temperatures, so they should benefit from this.

Grosjean has tasted success at the Yas Marina circuit, not in single seaters but driving a Ford in the FIA GT1 World Championship in 2010 during his year of exile from Formula One after being dropped by Renault.

Are you going to the Abu Dhabi Grand Prix?

If you’re heading to Abu Dhabi for this weekend’s race, we want to hear from you.

Who do you think will be the team to beat in the Abu Dhabi Grand Prix? Have your say below.

Being pelted by rain on his first visit to an F1 race at the 1998 British Grand Prix wasn't enough to dim Chris's passion...
Read more about Chris Turner, find all their articles and get in touch with them