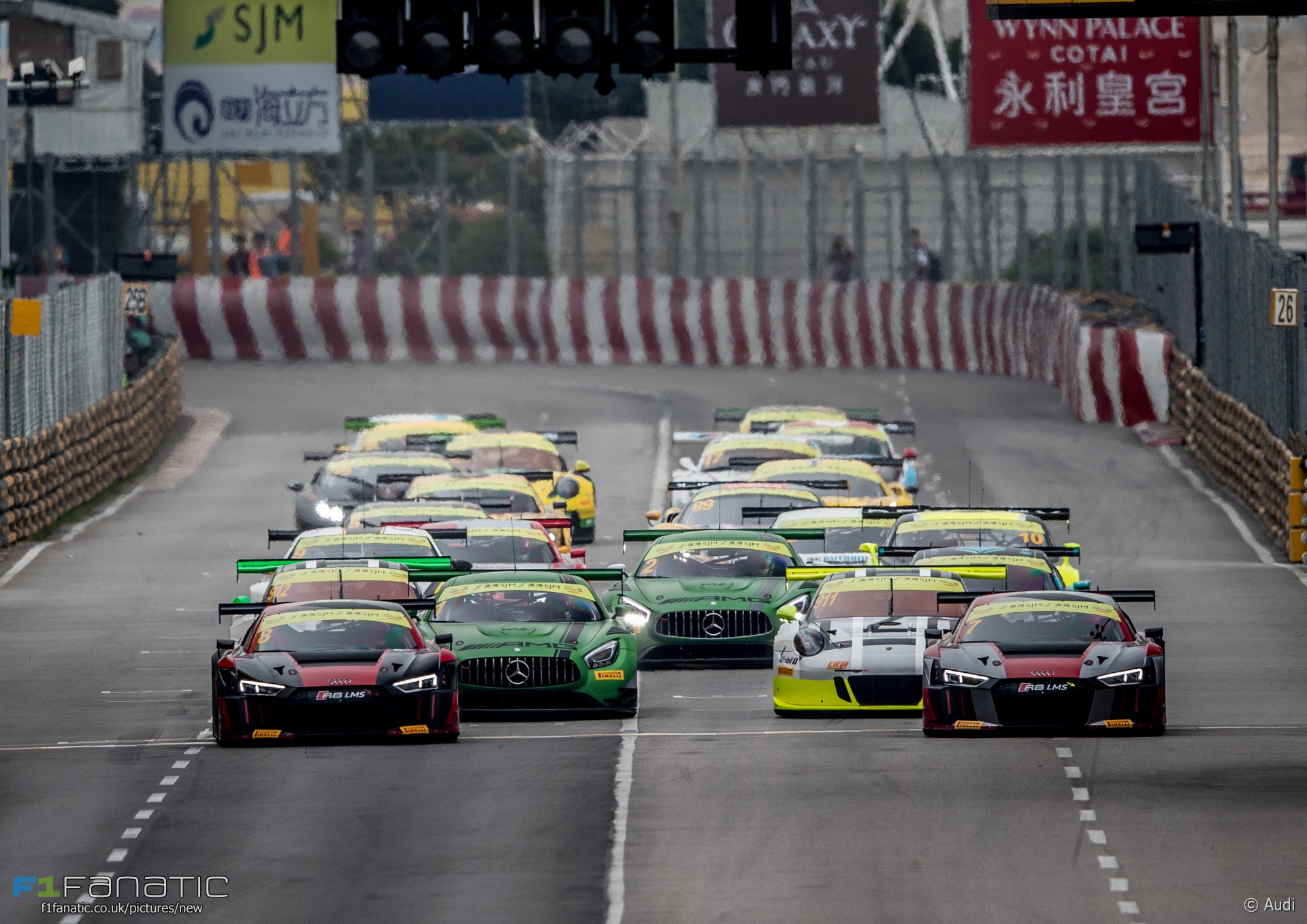 The FIA GT World Cup in Macau was won in bizarre circumstances on Sunday. Just four laps of racing were completed and the winning driver flipped onto his roof in a race-stopping crash.

Last weekend also saw the 63rd running of the Macau Formula Three Grand Prix and the conclusion of the NASCAR championship.

And following the surprise news of the past few weeks, Audi and Volkswagen departed the World Endurance Championship and World Rally Championship with victories.

Elsewhere the NASCAR title was wrapped up for 2016 and predictably chaos reigned at the Macau Grand Prix.

The FIA GT World Cup race at Macau was abandoned after four laps of a scheduled 18, and the winner’s trophy given to a driver who had just climbed out of an overturned car.

Audi’s Laurens Vanthoor had just been passed for the lead by Earl Bamber’s Porsche when he made heavy contact with the barrier at Mandarin, flipped onto his roof and slid to a stop while the field dodged around him. With no time left to complete the race the organisers had no choice but to abandon proceedings and declare the result on countback, handing victory to the embarrassed Vanthoors.

Bamber received a penalty late on in the race after he was judged to have blocked Engel off the start, dropping him to fourth in the final order.

Much of the time window available to run the race was lost owing to a long delay in repairing a barrier after Ricky Capo crashed on the second lap.

Antonio Felix da Costa joined Felix Rosenqvist and Edoardo Mortara as two-time winners of the Macau Grand Prix. He saw off late pressure from Rosenqvist after overtaking team mate Sergio Sette Camara, who had surged into the lead from third on the grid.

Da Costa took lead at Lisboa following a Safety Car restart on lap seven. At this point da Costa sprinted clear as Rosenqvist pressured Camara until he took second with only two laps to go. Japanese regular Kenta Yamashita finished an impressive fourth after passing Callum Ilott. Lando Norris recovered well to take 11th position after starting on the back row having crashed in the qualifying race.

Unlike the two other major races in Macau, the Guia Race weekend coupled as the finale to the TCR International Series season. Race one – which was dubbed the qualifyin race but awswarded points as usual – was won by Stefano Comini ahead of team-mate Jean Karl Vernay and guest driver Tiago Monteiro.

There were three separate incidents on lap one including one involving former F1 driver Gianni Morbidelli, leading to the race being red flagged. At the restart, the field only got as far as Lisboa: Mat’o Homola went side-by-side with championship leader James Nash, only to crash into the wall, with Nash suffering terminal damage. The track was totally blocked, and the race was stopped with only half the distance covered. As a result, half points were awarded, and Nash headed Comini by half a point going into the final race, but with a significant disadvantage.

The second race was not only for the Guia Race title (meaning the grid order was the same as the race one result), but also the decider for the TCR title. Comini and Vernay both led off the line, but Monteiro took first place into Lisboa. Nash started 18th, but ended up in 11th at the end of lap one. A blockage at Moorish Hill involving a Chinese championship Citroen caused another red flag. Monteiro survived the restart to take his first Macau win at the ninth time of asking, while Vernay, Pepe Oriola, Comini and Dusan Borkovic completing the top five. Due to the stoppage half points were again awarded. That meant that despite Nash recovering brilliantly to eighth, Comini’s fourth place made him the TCR champion for the second year in a row.

Despite the championship still being up for grabs, the main story heading into the last round of the World Endurance Championship was the impending departures of Audi and Mark Webber. In this respect the race could not have played out better, with Audi claiming another impressive one-two and Webber also on the podium in third.

It was to be the number two Porsche of Romain Dumas, Neel Jani and Mar Lieb that took the title however, despite an early altercation that knocked a tyre off the rim and caused damage, forcing them into the pits.

The World Rally Championship title fight was over before for the final round and in Australia the series was coming to terms with the shock news of Volkswagen’s impending departure.

Sebastien Ogier, who has taken all four titles with Volkswagen since they joined the WRC full time in 2013, gave it his everything for one final victory. But sweeping the dusty Australian roads proved too hard a task even for him to master and his team mate Andreas Mikkelsen took the win.

Round 36 of 36: Homestead-Miami Speedway

Despite a pre-race penalty due to forbidden car modifications, Jimmie Johnson raced his way through the field to take the win and clinch the title. Johnson’s seventh NASCAR championship means he has equalled the record of Richard Petty and Dale Earnhardt.

Next weekend the last few championships come to a close for 2016. The Formula One title will be decided between Nico Rosberg and Lewis Hamilton in Abu Dhabi, while the only other championship still open is the V8 Supercars as they head to Sydney.

The World Rallycross and World Touring Car Championships are also in action for the final time in 2016, from Argentina and Qatar resptively.

Thanks to Robert Mathershaw (@Mathers) for contributing to this article.