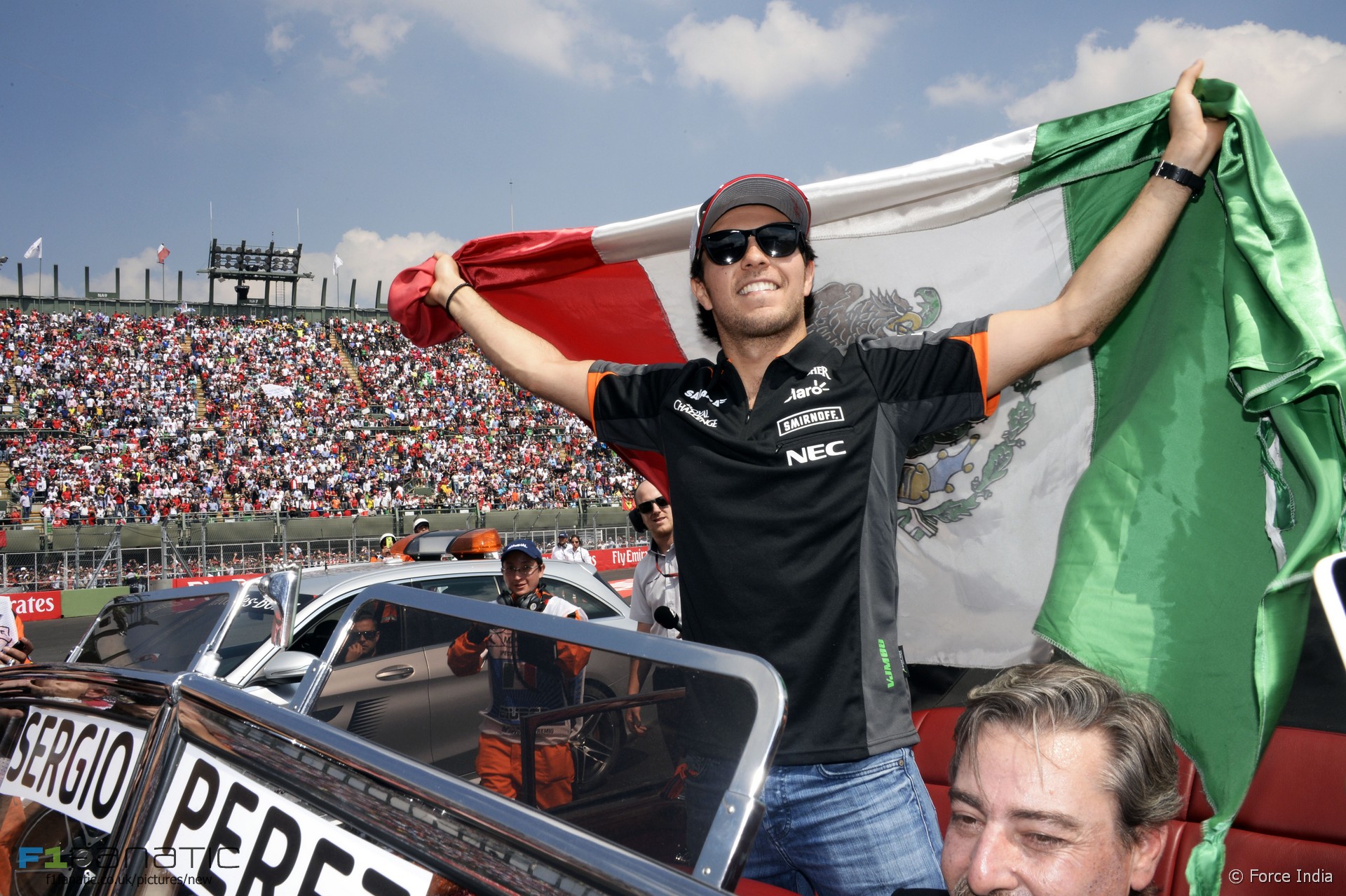 Sergio Perez stood out with some excellent performances after Force India introduced their upgraded VJM08 at the British Grand Prix. But he also put in some largely overlooked drives of true quality in the first half of the season.

On top of that he showed up well against a quality team mate and generally stayed out of trouble. The outcome was a season which compared very well against many of the top drivers.

Perez failed to shine in the first two races of the year, spinning while trying to pass Jenson Button in Australia and misjudging a battle with Romain Grosjean in Malaysia, tipping the Lotus driver into a spin. These race-day frustrations tended to have their root in sub-par qualifying performances which in turn were down to that 2014 bugbear – tyre preparation.

But Perez made rapid progress and in Bahrain he stunned the team by ekeing out his tyres to complete the race with just two pit stops, something they did not believe would be possible. His reward was a meagre eighth place, but it was as good as the car was capable of and his team mate was 25 seconds behind.

Monaco was another drive from the top drawer – starting and finishing seventh behind a full complement of Mercedes, Ferraris and Red Bulls was the limit of what the car could do.

The new car arrived soon afterwards and in Hungary despite a scare in practice – a suspension failure flipped the car over – Perez made a rapid start and was on course for the points again when he was knocked off the track by Pastor Maldonado.

According to Perez, the next race in Belgium produced a breakthrough for him during practice. He lined up fourth on the grid, passed two others at the start and got to Les Combes before anyone else – though with Lewis Hamilton on the inside of him he was never going to stay there. Inevitably the car could not sustain that kind of position, but fifth was still the team’s best so far – until Perez raised it further.

After solid points finishes in Italy and Singapore – and a nothing race in Japan where he was knocked off at the first corner – Perez exploited a Safety Car period in Russia to put his tyre-nursing skills to superb use. He kept Valtteri Bottas at bay until the penultimate lap, when the Williams driver used every drop of power to demote him, and Kimi Raikkonen followed him by. That wasn’t the end of the story, of course – the pair tangled on the final lap handing Perez a fortuitous but richly deserved podium finish.

Another strong fifth in America meant expectations were high ahead of his home race. Although he finished behind team mate Nico Hulkenberg Perez was probably the quicker of the two, and was poorly served by his strategy.

The final race of the year saw Perez put his Force India on the second row again, and finished behind two Mercedes and two Ferraris. Again, it was hard to see how he could have done much better. If third in the rankings seems high, it is because it was often hard to say the same of many of those behind him.

Australia – Interestingly, when the FIA discovered Perez had overtaken Ericsson under the Safety Car they chose to tell him to hand the position back instead of dishing out a penalty as they did to Heikki Kovalainen in similar circumstances three years ago. He had to let Button past while doing that, and later spun while trying to pass the McLaren. He got past in the end, however, and collected the final point.

Malaysia – For the second weekend in a row Perez had a disappointing race. He lost a lot of ground after the Safety Car period as his medium tyres began to fade, then an unnecessary collision with Grosjean meant he also received a ten-second penalty.

China – The first car to be eliminated in Q2, Perez was one of the few drivers to opt for an aggressive three stop strategy to try and make places through the field. Was catching Ericsson’s tenth placed Sauber in the final stint, but was unlikely to have ever challenged him even without the Safety Car.

Bahrain – Force India’s simulations showed the downforce deficient VJM08 would not be able to use the same two-stop strategy as many of the team’s rivals. But Perez made it work and brought the car home in eighth place, a result the four-time podium finisher called “one of my best races”.

Spain – A long final stint on medium tyres allowed him to hold off Ericsson for 13th place, but any repeat of his Bahrain heroics was out of the question on a track where the VJM08’s shortcomings were so clearly exposed.

Monaco – It’s hard to see how he might have improved on seventh in qualifying and the race given that he had three pairs of faster cars – Mercedes, Ferrari and Red Bull – ahead of him each time.

Canada – If he’d been able to replicate his Q2 lap time in Q3 he’d have started eighth on the grid behind his team mate, but struggled to generate tyre temperature on his out lap. Tyre, brake and fuel-saving was the story of the latter part of Perez’s race. He finished eleventh, and Force India’s effort to get another penalty for Grosjean so their man would inherit tenth came to naught.

Austria – Stuck behind Alonso in Q1, with Raikkonen close behind, and failed to make the cut on the drying track. However he started well, despite being on the harder tyres, and nabbed a place off Grosjean at the restart. After switching to super-softs for the second stint, he was able to pass Kvyat and Nasr for ninth place.

Britain – Narrowly missed out on joining his team mate in the top ten shoot-out but said the updated VJM08 still has much untapped potential. Scrapped with both the Ferrari drivers during the race but finished behind both of them, saying he waited too long to put on intermediates at the end.

Hungary – A right-rear suspension failure cause a substantial crash in first practice, and Perez admitted afterwards he’d been scared when his car flipped over. He bounced back to take 13th on the grid and mimicked his team mate by making up five places at the start. However he was turfed off the track by Maldonado while passing the Lotus, and with a damaged car and a lengthening brake pedal Force India later opted to retire him.

Belgium – Was extremely pleased with his car’s balance and qualified fifth which became fourth after Grosjean’s penalty – his best since Bahrain last year. It got even better at the start as he passed Bottas and Perez – and nearly took Hamilton too. Ricciardo jumped him at the first round of pit stops but Perez used his grip advantage to pass him shortly afterwards. However his car proved too hard on its tyres and he eventually lost places to Grosjean and Kvyat. Nonetheless fifth was Force India’s best result so far this year.

Italy – Briefly moved up to fifth at the start before Rosberg came past, then had to give up another position to Raikkonen who passed him easily in the DRS zone. Nonetheless collected a solid sixth place.

Singapore – Believed he could have made it into Q3 had it not been for the yellow flag caused by Sainz. He gained three places at the start, however, and profitted from the first Safety Car period to make up more places. He eventually finished seventh, holding off the fast-closing Toro Rossos in the closing stages.

Japan – Having qualified ninth he was unfortunate to be knocked off at the first corner while trying to avoid the Ricciardo/Massa mess. With no Safety Car appearing points were impossible, but he made it back up to 12th.

Russia – Running sixth after the start, Perez was well-placed to take advantage of the Safety Car period caused by Grosjean’s accident, and as in the past he proved a master at coaxing every last drop of life from his tyres. Even so his podium hopes seemed to be over when Bottas and Raikkonen passed him with DRS on the penultimate lap – only for the pair to collide on the next tour, restoring him to a well deserved third place.

United States – Out-qualified Hulkenberg and started fifth. That was where he finished too, though he probably should have been able to keep Verstappen behind.

Mexico – Force India expected better conditions at the end of Q3 and sent both drivers out then – only to discover the track had actually deteriorated. Perez narrowly won the intra-team contest this time. In the race he made two crowd-pleasing passes in the stadium (one aided by Sainz being told to let him past) but when the Safety Car came out Force India mistakenly believed they could gain him two places by not pitting. That didn’t pay off, but he held his position despite ending the race on 53-lap-old tyres.

Brazil – Said he wasn’t comfortable with the car all weekend, and admitted to an error on his last run in Q2 which cost him a place in the final ten. His difficulties continued into the race – unusually he pitted once more than his team mate and found himself passed by cars which were slower in a straight line as his tyres went off quickly.

Abu Dhabi – After his Brazil blip Perez was back at the strong level of performance which has characterised much of his second half of the year. He was third after the initial runs in Q3, but slipped to fourth when Raikkonen bettered his time. With Vettel making up for lost time in the race, fifth was likely the best result available.

Normally a bit of an inconsistent driver with some flashes of brilliance and some mistakes. But this year he’s been on fire. In the A-version of the car he did a pretty solid job. But once the B-version was introduced he delivered some really great performances. Third at Sochi and fifth places at Austin and Abu Dhabi are the highlights of his season.
@Jlracing

What’s your verdict on Sergio Perez’s 2015 season? Which drivers do you feel he performed better or worse than? Have your say in the comments.

Add your views on the other drivers here: