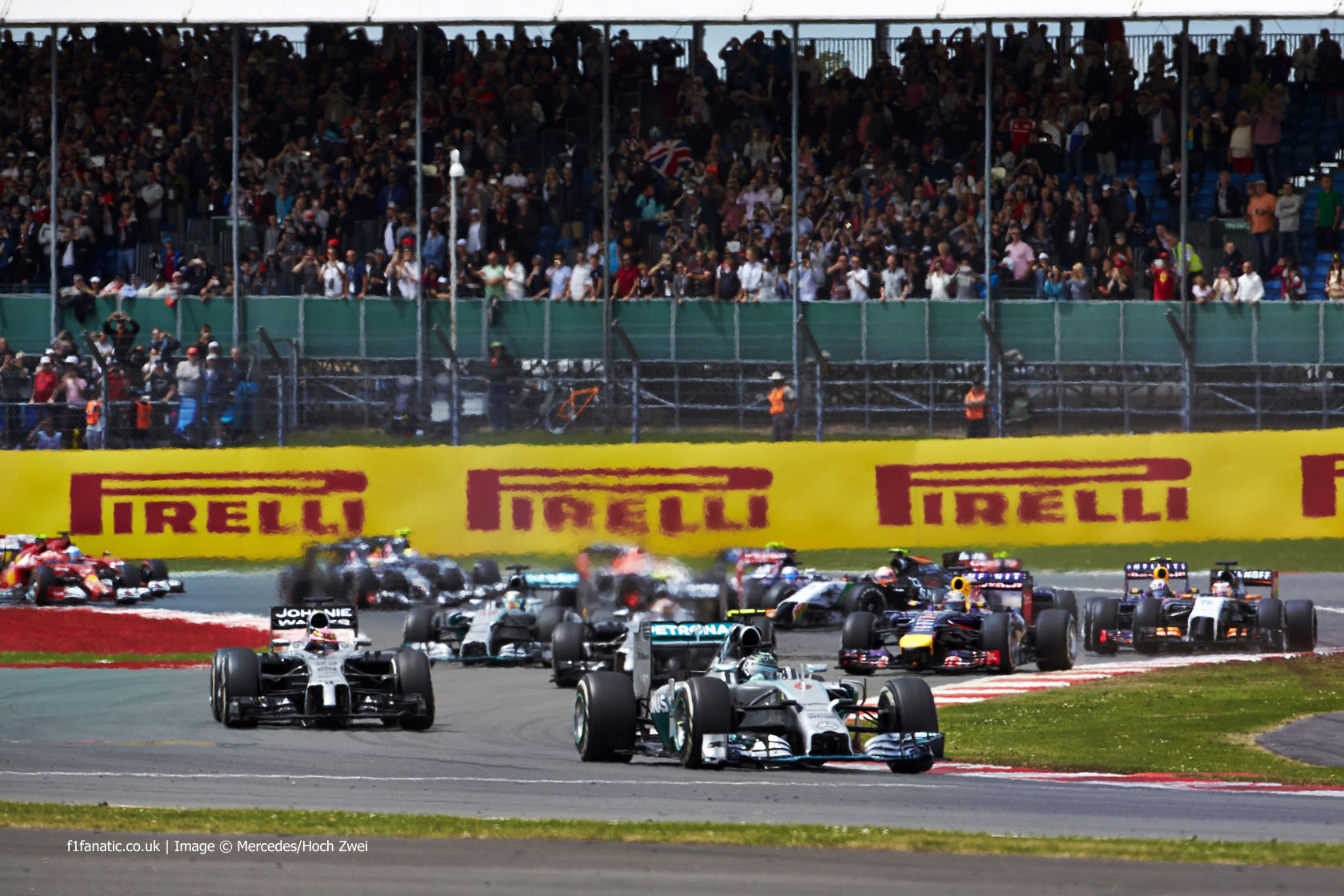 Formula One is not enjoying a vintage year.

A succession of underwhelming races featuring little contest for the podium positions has dampened enthusiasm for the championship. And off the track matters are worse.

In the days running up to the British Grand Prix the official Formula One website carried yet another broadside against the sport from Bernie Ecclestone, who branded its current engine formula “stupid”.

This came mere days after FIA president Jean Todt urged Ecclestone to be less negative about F1. With the sport’s commercial rights holder lambasting his own product, how can anyone else be expected to give positive messages about it?

Happily, F1’s beleaguered public profile looks set for a much-needed boost this weekend at Silverstone, where a bumper crowd of 140,000 is expected. Many will arrive hoping to see Lewis Hamilton add a third victory to follow his 2008 and 2014 triumphs.

But whatever the result, F1 fever is unlikely to be in short supply come Sunday. With three drivers plus seven of the ten teams counting this as a home event, it’s not just Hamilton who will have the crowd behind him.

Since the last British Grand Prix a new management regime has been installed at Silverstone, one which has placed a focus on improving the affordability of the race. At a time when Germany is without a race and Italy’s is under threat, Silverstone enjoys the stability of an unprecedented 17-year contract agreed at the end of 2009.

Silverstone’s layout has evolved many times since it held the first ever world championship race 65 years ago. Its latest iteration features a winning balance of eye-popping high-speed corners, plus straights which offer overtaking opportunities.

Perhaps most encouragingly, while the soft and super-soft Pirelli tyres used in the last three races were very much on the conservative side, the medium and hard compounds being used this weekend contributed to the best race of the season so far in Malaysia.

While recent races may not have impressed, the drivers’ championship battle is closer now than it was 12 months ago. Austria was one of Nico Rosberg’s most convincing displays yet: he was clearly quicker than Hamilton, and despite being beaten to pole position he got ahead of his team mate at the start and stayed there.

If Rosberg’s going to beat Hamilton to the title this year, he’ll need to produce more performances like that. A morale-boosting home race will be timely for the championship leader, who has lost points to his team mate in three of the last four races.

‘Show me a good loser and I’ll show you a loser’ appears to be the Red Bull mantra these days. Stuck with an uncompetitive engine – albeit one which Toro Rosso beat them with in Austria – the team’s management used their home race to lobby again for changes to F1 and make further threats about leaving.

The team can at least reconcile themselves with the knowledge they’ll have a few corners to get their teeth into this weekend. However the chances of a podium finish, much less a win, still seem remote.

With podium finishes in the last two races and a substantial aerodynamic upgrade in Austria, Williams has regained some momentum following its somewhat disappointing start to the year. Problems at Ferrari have played into their hands, however, and it remains to be seen if either of their drivers can beat the red cars ‘on merit’.

Valtteri Bottas was in superb form at this race last year, recovering from a surprise exit in Q1 to bring his car home in second place.

There is much hope invested in Ferrari’s ability to take the fight to Mercedes but in the last two races they’ve had pretty much the full gamut of problems: technical, operational and driver error.

Despite that they’ve shown some pace, and not just in practice. Vettel’s second stint in Austria on the soft tyres was strong even accounting for the fact the Mercedes drivers were no long flat-out. And with high temperatures forecast for Silverstone, Ferrari may have a chance of repeating their 2015 peaks from Malaysia and Bahrain.

However Kimi Raikkonen has become a focus of attention for all the wrong reasons. Austria was a poor weekend for him by anyone’s standards, and a question mark hangs over his place in the team next year.

It seems increasingly likely the only achievement McLaren will record in their first season reunited with Honda will be taking more grid place penalties than anyone in the history of the sport.

Fernando Alonso’s promising post-Austrian Grand Prix test, in which he racked up over 100 laps, showed the team is making progress in this area. However damage sustained in his first-lap crash with Raikkonen may mean his weekend is compromised by more penalties.

It may have taken a while to arrive, but there could be no better place for Force India to give their heavily revised VJM08 its race debut as their factory is based opposite the Silverstone circuit.

Austria was their best race weekend of the year so far, with a rejuvenated Nico Hulkenberg taking sixth place which moved them up to fifth in the championship ahead of Lotus. If the new car delivers the goods and they hold on to that position, it would be their best ever constructors’ championship result.

For the second race running, Max Verstappen is driving at a track he has prior experience of. He held the upper hand over team mate Carlos Sainz Jnr in Austria, but the latter’s race was spoiled by a technical problem. This remains one of the most absorbing intra-team contests in F1 at the moment.

While the Lotus E23 is clearly a major step forward over its predecessor in terms of performance, reliability remains a weakness. More points were lost in Austria where Grosjean suffered two separate and unrelated gearbox problems: one in Q3 and the other in the race.

As usual Jolyon Palmer will be in Grosjean’s car during first practice.

If McLaren’s Austrian Grand Prix was conspicuously disastrous then Sauber’s was quietly terrible. At a track where the car had obvious pace – Felipe Nasr was eighth on the grid – brake and power unit problems left both drivers out of the points.

Raffaele Marciello will return for the team during practice.

Will Stevens will race in his first home grand prix this weekend after his Austrian outing was wrecked by debris. Roberto Merhi has been a much greater threat in recent races, however.

Are you going to the British Grand Prix?

If you’re heading to Great Britain for this weekend’s race, we want to hear from you.

Who do you think will be the team to beat in the British Grand Prix? Have your say below.

27 comments on “How Silverstone can breathe life back into F1”