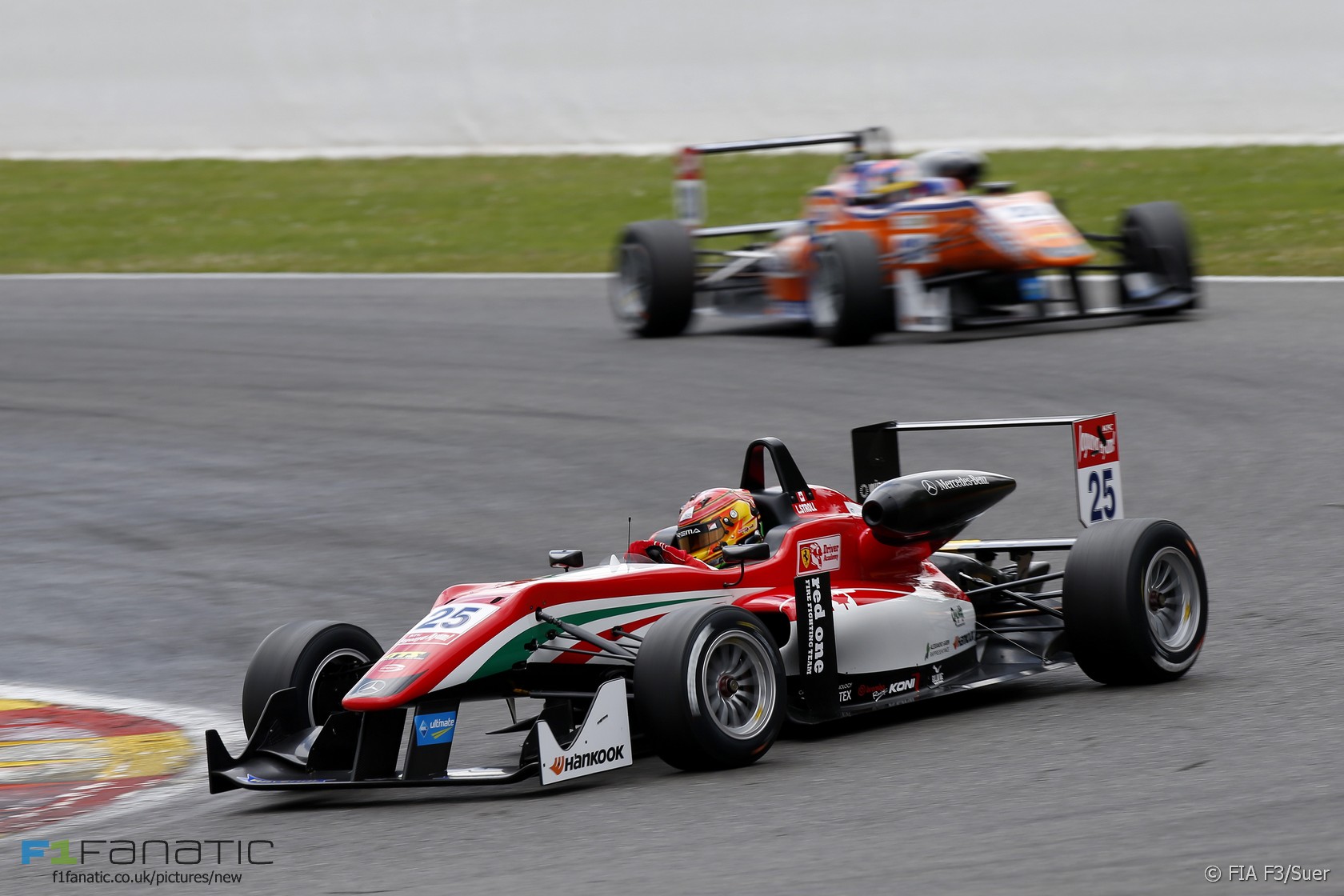 The European Formula Three drivers had been warned and after more woeful driving in last weekend’s round at Spa-Francorchamps the stewards took action.

Lance Stroll, one of Ferrari’s junior drivers and the reigning Italian Formula Four champion, was banned from the weekend’s third race after taking himself and two other drivers out while fighting for the lead in the previous event.

Elsewhere World Rallycross had a first time winner, the reigning World Touring Car Champion failed to win a race for the second round in a row, and the V8 Supercars were back in action after a one-month break.

Catch up on the weekend’s action below.

“I can officially state that I’ve lost all my trust of other drivers,” fumed Felix Rosenqvist on Twitter after this weekend’s races. “This is not racing, its dangerous.” Rosenqvist, who’s won more races than any other F3 driver this year, was involved in collisions at Les Combes in all three races at Spa. The first came at the end of an exciting three-way scrap for victory between him, Charles Leclerc and Antonio Giovinazzi. Leclerc profited as his rivals tangled (see first video), Rosenqvist was able to salvage second and Alexander Albon completed the podium.

But race two brought back memories of the dire weekend in Monza which led to one race being abandoned. Jake Dennis won after a collision eliminated the leading trio of Lance Stroll, Mikkel Jensen and Rosenqvist (see second video).

The Safety Car was kept busy throughout the race as first Kang Ling speared Julio Moreno at the chicane and later Gustavo Menezes was fortunate to survive a horrific accident after contact with Brandon Maisano. The Carlin driver flew into the barrier backwards and upside down, and the race finished behind the Safety Car.

The marshals banned Stroll from race three and handed Maisano a grid penalty for his role in the Menezes crash. Dennis took his second win in a row after pressuring Jensen into spinning off and crashing. On a damp track the race was briefly led by Tatiana Calderon, who unlike many of her rivals chose to start on wets, but as she dropped back Leclerc took second place – and the championship lead.

Championship leader Jose Maria Lopez was kept from the top step of the podium for a second race weekend in a row, this time by two of his Citroen team mates. Yvan Muller led him home in race one, with Sebastien Loeb third ahead of Rob Huff’s Lada. Guest driver Nestor Girolami, a regular in the Argentina’s TC2000 series, took the final point in tenth.

The podium trio lined up eight, ninth and tenth for race two – but again finished in the top three places. This time it was Loeb who took the victory plaudits, and another second place for Lopez meant Muller only took five points out of his championship lead over the weekend. It was another forgettable weekend for Honda, Gabriele Tarquini scoring their best result with fourth ahead of Hugo Valente and pole sitter Jaap van Lagen.

Race two was a happier affair for Lowndes, who set a new record by becoming the first driver in the championship to take 100 wins – appropriately he did it in the 888th race for his Triple Eight Holden team. Lowndes started fifth but avoided a collision between front row occupants Coulthard an Rick Kelly to take the lead. Tim Slade took second, forcing Mostert to settle for third.

The final race saw David Reynolds victorious for the first time this year, beating the again impressive Mostert by nine tenths of a second. He lost the lead to Coulthard at the start, but got back ahead after the first pit stop and stayed ahead despite of going off-track briefly late in the race.

Davy Jeanney dominated the event ahead of reigning champion Petter Solberg. However Solberg extended his points lead over Johan Kristoffersson – who could only manage fourth.

Timmy Hansen completed the podium, ensuring a one-three for Team Peugeot-Hansen, their best ever combined finish.

In GP2 the fight for victory was closer but the championship is decidedly one-sided. Stoffel Vandoorne took his fourth feature race win out of four, then fought from eighth to second in race two. Rio Haryanto hung on to win despite pressure from the McLaren driver and a damaged front wing.

Luca Ghiotto converted a pole position into victory in the first GP3 race, while a storming drive from ninth on the grid saw team mate Oscar Tunjo win race two. Another Ferrari junior driver was on the wrong side of the stewards following a collision with his team mate: Antonio Fuoco tangled with Jann Mardenborough in race two, earning a three-places grid penalty for Silverstone.

Ghiotto now enjoys a 19-point championship lead over Marvin Kirchhofer, as Esteban Ocon was excluded from third place when his car failed a technical check. Next weekend the first Formula E champion will be decided in a double-header event in London. At the opposite end of the speed spectrum, IndyCar will be in action on the Fontana superspeedway and NASCAR takes in one of its two road courses as it heads to Sonoma.

The European F3 drivers will have to be on their best behaviour at the tricky Norising street circuit where they will be supporting the DTM. The WTCC feld heads immediately to Paul Ricard where hopefully some Auto GP cars will turn up to race as well.

Meanwhile in the British Touring Car Championship Lewis Hamilton’s younger brother Nicolas will make his debut in an Audi S3 at the Croft round.

Tell us about your race weekend viewing plans – and what you enjoyed last week – in the comments.

18 comments on “Ferrari junior gets race ban in F3 clampdown”