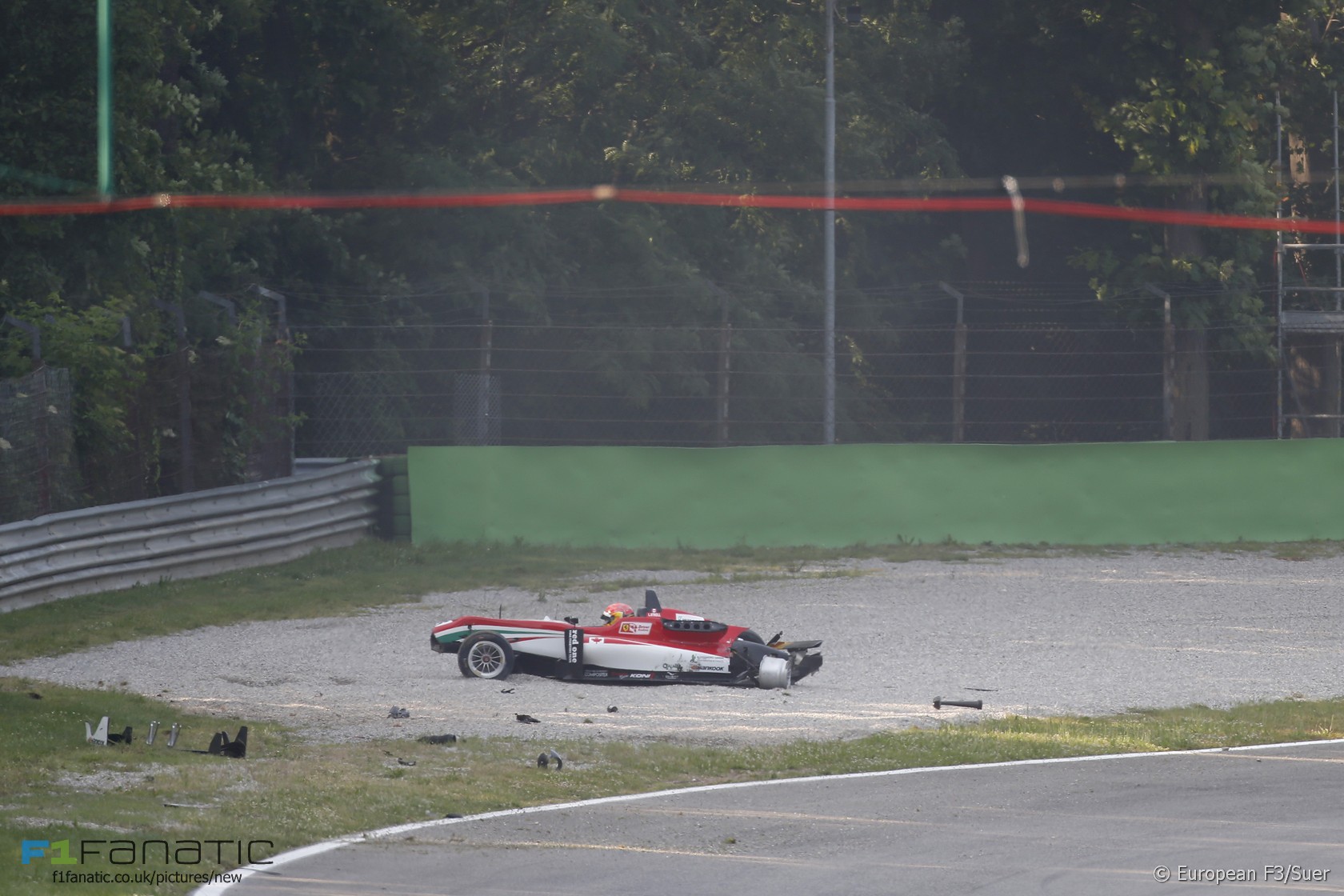 The third European Formula Three race Monza yesterday was called off by the organisers following a series of major accidents.

Elsewhere, rain played havoc with IndyCar’s only double-header meeting of the year, and DRS trouble hit the Formula Renault 3.5 field.

Dismal driving standards and ferocious crashes led the organisers of the European Formula Three meeting at Monza to abandon the final race.

After a slightly scrappy first race – won, like the other two, by pole sitter Felix Rosenqvist – a frantic second race on Saturday saw aerial accidents for two drivers.

The first was Ferrari development driver Lance Stroll, who was pitched into a terrifying somersault following contact with Antonio Giovinazzi at Curva Grande (first video). That prompted the first Safety Car intervention which was soon followed by another as Michele Beretta crashed at the Rettifilio chicane.

Further incidents led to the race being red-flagged short of full distance and half-points awarded. Hopes that any further dramas might be avoided were dashed within seconds of the third race starting, as Ryan Tveter became the next driver to fly through the air after contact with Fabian Schiller (second video). Tveter, who suffered a back injury in a first-lap crash in a Formula Renault 2.0 Eurocup race at Paul Ricard last year, was taken to hospital for checks.

Following a spate of further minor incidents the Safety Car appeared on track and the race was red-flagged. Once again, only half-points were awarded.

The red flags flew in both the weekend’s IndyCar races as heavy rain hit the Detroit street circuit. Carlos Munoz and Sebastien Bourdais shared the wins as seven different drivers have now claimed victory in the opening eight rounds.

Will Power led a single-file start on a soaked track in race one but Takuma Sato took the lead before a spate of caution periods affected the race. Marco Andretti pitted early for slick tyres as the track dried, and it took him to the head of the field as others eventually did the same.

But with the radar screens showing a large band of rain nearby, and with many drivers needing to pit for fuel, several teams took the surprising decision to switch their drivers to wet-weather rubber before the rain arrived. Munoz resisted the temptation for longer than most and it proved an inspired decision, handing him a 20 second lead after he eventually pitted. Within laps the predicted downpour then occurred, and with lightning in the area the red flag was thrown, handing Munoz his first win.

The rain persisted on Sunday: qualifying was abandoned and the grid set based on entrants’ points. Montoya built up a lead as the track dried at first then the rain returned. Montoya lost the field when the field pitted en masse during the safety car and one of his crew members lingered over a front wing settings change. Fast pit work by KV put Bourdais in the lead, then Sato controversially squeezed past Montoya at another restart. A late collision between Power and team mate Helio Castroneves led the organisers to red-flag the race so it could finish under green. Had the race gone its distance Bourdais might have been in trouble with his fuel, but as a time limit was now imposed he was able to keep Sato at bay for victory.

A DRS glitch led to a controversial decision from the Formula Renault 3.5 race organisers at Spa: drivers were told they could use it whenever they liked during the second race. This was good news for those who had opted for a high-downforce set-up, such as Mathieu Vaxiviere.

The Lotus driver, who won the mandatory-low-downforce race one thanks to an inspired pass on Nicholas Latifi at Pouhon, overtook Tio Ellinas after their mid-race pit stop then went off in pursuit of Dean Stoneman. Taking up to two seconds per lap out of his rival in the twisty middle part of the lap, Vaxiviere demoted his rival at the chicane then pressed on in pursuit of the other DAMS car of Nyck de Vries.

But unlike at Aragon earlier this year there was to be no repeat of the last-lap action between the pair. De Vries’ skinny rear wing helped keep him safe on the straights and he punched the air in delight as he collected second place behind runaway winner Oliver Rowland. The latter now holds a six-point lead over Vaxiviere, while Monaco winner Jazeman Jaafer recovered from last on the grid to claim sixth thanks to a stellar first lap.

Jamie Green took victory for Audi in race one, which came alive in the final part. Miguel Molina headed an Audi-dominated grid, with Green, Edoardo Mortara and Mattias Ekstrom behind. They fought for more than 40 minutes with the four separated by less than two seconds, and with only eight minutes to go, Green dived inside of Molina in turn one to take the victory.

Sunday’s second race saw Green win again, this time from pole. He was overtaken by Ekstrom at the start, but after 10 minutes he made another move into turn one to regain the lead. Despite the late appearance of the Safety Car, after Lucas Auer got stuck at turn eight, Green pulled out a two-second lead over Ekstrom at the finish, followed by Molina and Timo Scheider. Having filled the top four spots in race one, Audi went one better in the second event, locking out the top five.

The 13th round of the NASCAR season marked halfway in the build-up to the championship-deciding Chase for the Cup, which will begin at the 26th event in their mammoth 36-round calendar. Jimmie Johnson was already assured of a place among those eligible to win the title, and his fourth victory of the season at Dover further strengthens his hand. Kevin Harvick, who took his ninth top-two finish of the year, remains the points leader.

Renault’s new single-specification sports car support race made its bow at Spa. The triple-header format began with a one-hour race where the professionals and amateurs (‘elite’ and ‘prestige’ are Renault’s preferred euphemisms) shared driving duties on Saturday, then separate sprint races for each class on Sunday.

David Fumanelli and Dario Capitanio had the honour of sharing victory in the first race on Saturday ahead of fellow Oregon drivers Niccolo Nalio and 2012 Formula Two champion Luciano Bacheta. Which of these races did you watch over the weekend? What other motor racing action on four wheels – or two – was keeping you entertained in the gap between grands prix? Let us know in the comments below.

This week, as well as the Canadian Grand Prix, the IndyCar drivers are racing for the third weekend in a row at Texas. The FIA is taking its Formula E and World Touring Car Championships to Moscow in Russia, though both are racing at different venues on different days.

In Britain the Euroformula Open will be in action at Silverstone while the British Touring Car Championship heads to Oulton Park. Which of these will you be watching – and what else? Over to you in the comment.