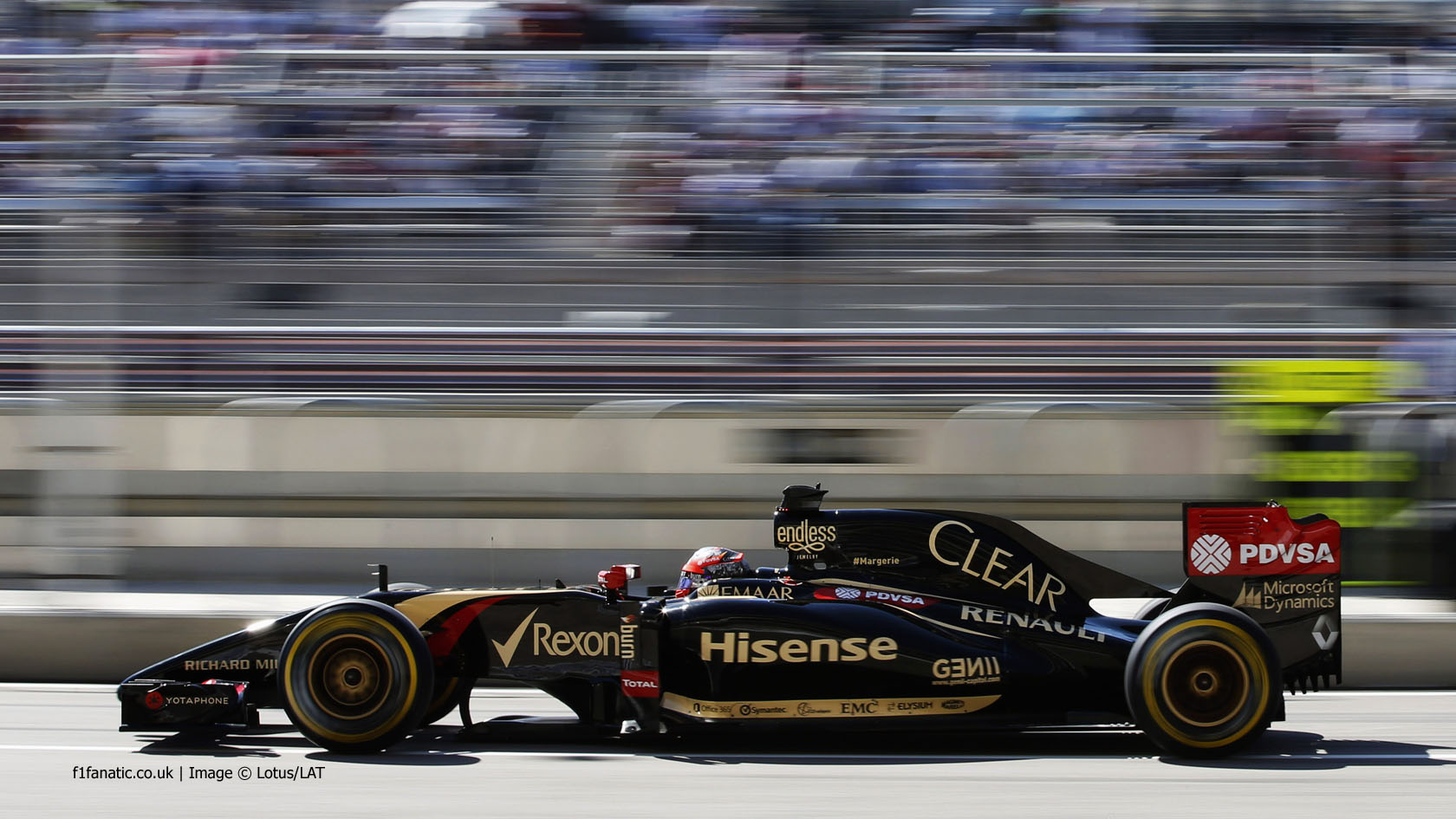 Lotus acquired a new name on their car for the United States Grand Prix while McLaren had a surprising new treatment for one of their sponsor’s logos.

However more questions are being raised over the appropriateness of alcohol advertising on racing cars, which could spell trouble for the “official whisky of Formula One”. Lotus acquired a new sponsor in Endless Jewelry. The logo appeared on the airbox and on top of the sidepods of the car in the United States (above).

The airbox, which had previously featured the driver’s names, then bore EMC branding in Brazil (right). In Abu Dhabi Hisense will return to the airbox, its third appearance on the car, having been on the sidepods in Austin.

There was also a ‘#Margerie’ tribute on Romain Grosjean’s car only, remembering Total CEO Christophe de Margerie, who had died in an airplane incident in October.

Grosjean, who also had tribute stickers on his helmet, said, “He was one of those men that you meet very rarely in a lifetime. I knew him for many years and he believed in me and helped me to achieve my motorsport dream. It was such a tragic accident and my thoughts are with his family, as well as the families of the other victims of the plane crash.” McLaren went from the regular SAP logo to a larger, brighter, angled and funky design, both on the sidepods and on top of the cockpit. Sauber have recently started to put their sidepod space to good use after keeping it empty for most of the year. This time they gave the extra exposure to Interproteccion (in the United States) and Cuervo Tequila (in Brazil).

With the team’s recent announcement of 2015 drivers not involving Esteban Gutierrez, companies Jose Cuervo, Interproteccion and the three owned by America Movil (Claro, Telmex and Telcel) could follow the Mexican out of Sauber at the end of the year. Williams also paid tribute to John Burridge, a team member that had passed away, by putting his first name on the rear wings:

A long serving member of the team, John Burridge, sadly passed away recently. This is our tribute this weekend pic.twitter.com/UW7TlPpD3g A potentially significant change for Force India at the Brazilian Grand Prix was the presence of Claro logos on their car’s sidepods in place of Sahara. These have previously been seen on the Saubers.

Claro is a telecommunications brand which is part of the America Movil company, which is run by Carlos Slim and based in Mexico City. The same group also includes Telmex, which backed Sergio Perez and Esteban Gutierrez’s careers via the Escuderia Telmex.

However with Gutierrez having lost his seat at Sauber for next season, Perez is the only Mexican driver remaining in the field ahead of next year’s return to the Autodromo Hermanos Rodriguez, which may explain Claro’s switch.

Kingfisher also had an increased presence, appearing on the outside of the headrests.

Threat to alcohol sponsorship in F1 The threat of a ban on alcohol advertising in Formula One has the potential to make matters worse amid the financial problems that are affecting many teams.

McLaren are sponsored by Johnnie Walker, which has also recently concluded a deal with Formula One Management. However at a time when greater focus is being put on the European Union’s restriction on advertising alcohol by associating it with driving, its endorsement as “the official whisky of Formula One” may become an obvious target for criticism.

12 comments on “Sponsor Watch: 2014 US and Brazilian Grands Prix”