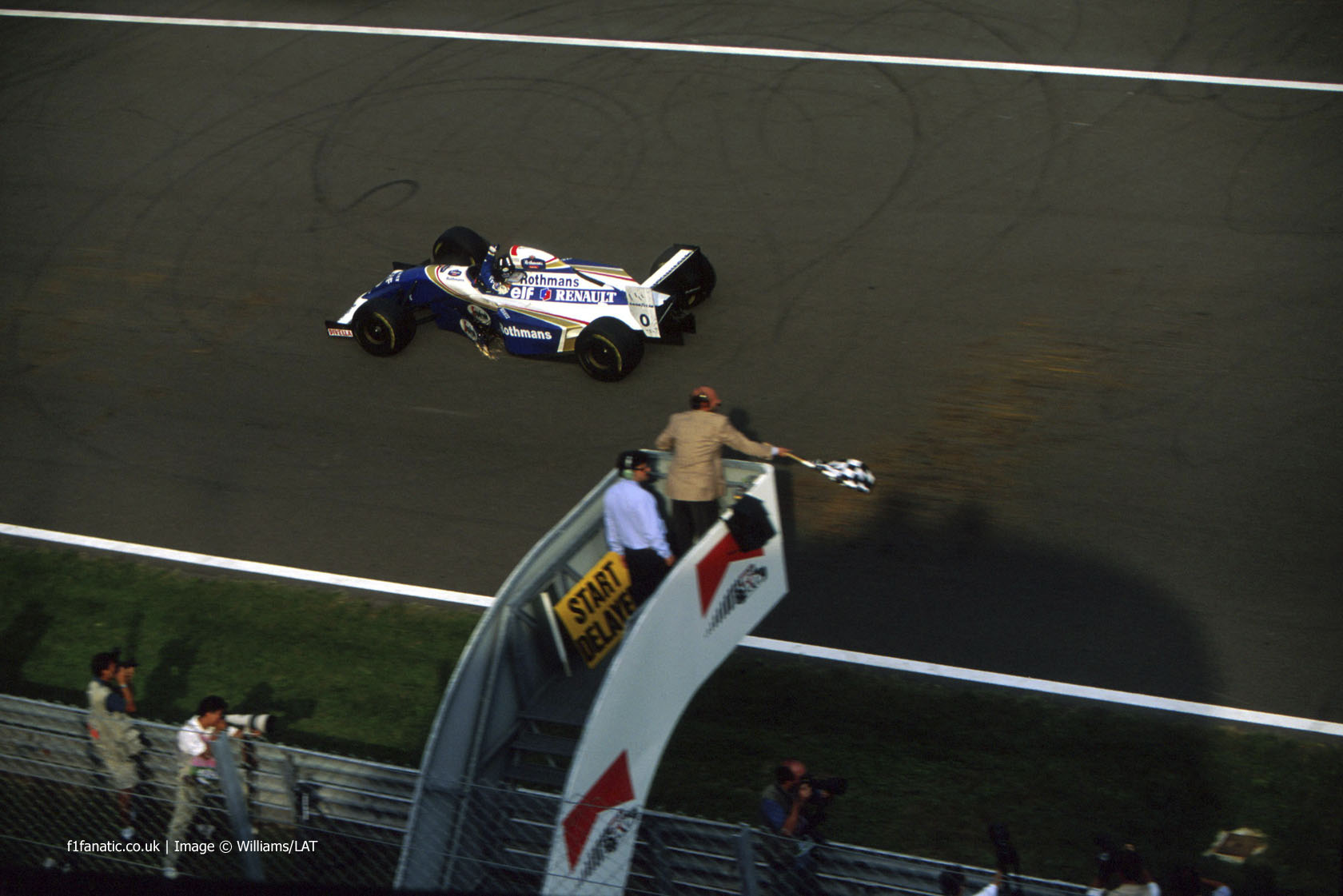 Formula One made a heavy-hearted return to Italy for the first grand prix in the country since the deaths of Ayrton Senna and Roland Ratzenberger four months earlier.

But the Italian Grand Prix, held 20 years ago today, almost didn’t go ahead amid the urgent push to improve F1 track safety in the wake of events at Imola. One month before the race Marco Piccinini, the president of the Commissione Sportiva Automobilistica Italiana, said Italy’s automobile club had withdrawn permission for the race to take place.

Representatives of the Grand Prix Drivers’ Association had demanded improvements to the run-off areas, particularly at the high-speed corners at the start of the lap. But to do so would have involved felling trees in the Royal Villa of Monza Park, which met with local opposition on environmental grounds.

Recently-elected Italian prime minister Silvio Berlusconi intervened within 24 hours of Piccinini’s announcement. Berlusconi, who had previously helped Bernie Ecclestone in his dealings with television broadcasters, reached an agreement with the Formula One boss for the race to go ahead.

As a concession to the GPDA’s demands the Lesmo 2 corner was tightened, but the run-off areas at Curva Grande and Lesmo 1 remained unchanged. However further improvements to the safety of the circuit were promised for the following season.

It was a sign that the GPDA’s resolve to force higher safety standards was weakening. There were signs of dissent within its ranks: Ferrari’s Jean Alesi said he was “appalled” by some drivers who were “prepared to do everything to prevent the Monza race happening”.

“A world championship without the Italian Grand Prix at Monza does not deserve the name,” he added.

Relations were strained at Williams as well. Damon Hill arrived at the 12th round of the championship knowing that with Michael Schumacher banned from the following two races he had a priceless opportunity to demolish the Benetton drivers’ 21-point championship lead.

Hill intended to start by asserting his position at Williams. To begin with he wanted David Brown, who had been race engineer to Senna and previous Williams champions Alain Prost and Nigel Mansell, to switch to his side of the garage from David Coulthard’s. He got his wish.

It was an inevitably weakened Benetton outfit that arrived at Monza. Not only was Schumacher banned from the race, he elected not to attend the grand prix.

Benetton’s line-up therefore comprised Jos Verstappen, who was making his eighth start and had never raced at Monza before, and JJ Lehto, who despite the promises of team principal Flavio Briatore had hardly sat in the car since being pulled from the race team three months earlier.

Matters took a turn for the worse for Benetton on Friday when Verstappen damaged his chassis. Following overnight repairs he suffered a further setback during Saturday qualifying when the onboard camera fell off Pierluigi Martini’s car and smashed his sidepod – fortunately missing the driver. The delays left him tenth on the grid, which was still ten places better than Lehto managed.

Alesi had further cause to cheer Monza’s reinstatement on the calendar when, at his 82nd attempt, he seized his first F1 pole position. Gerhard Berger joined him on the front row, doubling the joy of the Ferrari faithful.

Hill claimed third on the grid but Coulthard was bumped back to fifth by one of the greatest surprises of the season: Johnny Herbert’s Lotus in fourth place.

Neither of Lotus’s cars had started higher than 15th all season. But at Monza the combination of their low-drag configuration, a supple set-up to handle Monza’s kerbs and – perhaps mostly importantly – a lighter and more powerful new Mugen-Honda engine helped Herbert split the Williams drivers and put his car on the second row.

The team had only one gearbox suitable to work with the new engine, which went to Herbert. Alessandro Zanardi – back in the car for his home race following Philippe Adams’ Spa appearance – had to make do with the old equipment, but demonstrated the car’s affinity for Monza by taking 13th on the grid.

Herbert could have been forgiven for feeling under pressure ahead of the start of the race. Lotus, a once-great team of the sport with a 36-year heritage, had not scored a point all year and at the previous round had resorted to taking a pay driver after a court ordered them to pay a debt owed to Cosworth. A podium finish – or better – promised to hand them a financial lifeline.

Pre-race problems for Hill and Berger

Ferrari’s hopes of winning a race in Italy for the first time in six years suffered a blow before it had even began. During the morning warm-up Berger went off at the Roggia chicane, slamming backwards into a tyre barrier, and had to receive medical attention.

The incident raised further questions over safety standards in F1 as the session continued while Berger was attended to at the side of the track. But after a visit to hospital he was judged fit to drive – though he had to switch to the spare car which did not have Ferrari’s latest engine specification.

Hill faced a similar problem when his car sprang an oil leak on the grid. He dashed back to the Williams pit to take over the spare car, which as well as lacking Renault’s newest engine was also not set up to his liking.

Ferrari’s V12 power had propelled them to a front row lock-out on their home track. But their single previous win in 1994 had come one a day when the two Williams cars had been compromised. With Herbert’s Lotus also potentially in the mix, it promised to be an exciting race.

But Lotus’s hopes were dashed within seconds of the start. Eddie Irvine got away briskly from ninth on the grid, but arriving at the Rettifilio chicane he braked too late and hit Herbert.

Several other cars became involved in the melee, and with stationary machinery littering the first corner the decision was taken to stop the race. Although it gave Herbert the opportunity to rejoin, he had to do so in the spare car from the pit lane, minus Lotus’s new engine.

At the second start the Ferrari pair repeated their formation getaway ahead of the Williams pair. Alesi, planning to pit twice, pulled away from his team mate, who was still sore from his morning crash and went across the gravel at the Rettifilio early on, and came under renewed pressure from Hill and Coulthard.

Ukyo Katayama, who was also planning to pit twice, shot up to seventh at the start and then picked off Heinz-Harald Frentzen and Mika Hakkinen. He arrived on the tail of the Williams pair by the time of his lap 12 pit stop, but a sticking left-rear wheel took him out of contention.

Alesi out of luck again

A worse fate awaited Alesi when he came in three laps later. His gearbox refused to select first gear and his car was pushed back into the garage. The fuming Alesi, who had been forced to retire from second place two weeks earlier, stormed off.

Ferrari had lobbied strongly for refuelling pit stops in the face of strong opposition from rival teams, and were continuing to resist efforts to scrap it for 1995. But they must have wondered whether it was worth it when their other car’s pit stop also torpedoed his chances of victory.

Berger’s stop went smoothly, but just as he was about to leave Olivier Panis pulled into the adjacent pit box, forcing him to wait. The Monza crowd jeered the Ligier mechanics as the delayed Ferrari lost enough time to drop behind both Williams drivers.

As at Spa, Coulthard jumped in front of Hill when they pitted. But this time it came back to bite him. Coulthard was quick to hand over the lead when ordered to, but on the final lap his engine coughed at the Parabolica and he coasted to a stop, out of fuel.

That cost Williams six points on a day when they had a chance to inflict maximum damage on Benetton. Verstappen had tangled with Zanardi on the first lap and later retired with damage. Lehto, meanwhile, could have inherited sixth from Coulthard had a wheel sensor not failed, leaving him unable to activate his speed limiter when he came into the pits, leading to a costly ten-second penalty.

Berger, who had closed on the Williams pair as Hill moderated his pace, was promoted to second. Hakkinen inherited the final podium place, and with Martin Brundle in fifth McLaren had both cars in the points for the first time all year. The pair were separated by Rubens Barrichello, who had to take evasive action on the straight when Frenzten’s Sauber blew its Mercedes engine in front of him.

Having again missed out on his first podium finish, Coulthard was classified sixth ahead of Eric Bernard’s lapped Ligier. The two Minardi’s retired shortly after half-distance, so there was no repeat of their finishing line acrobatics of 12 months earlier.

The end of the road for Lotus

Herbert had climbed his way up to 14th in the old car before its engine died. Less than 24 hours later Lotus applied for an Administration Order at the High Court.

What might Herbert have achieved had he not been taken out at the start of the original race? Even on a two-stop strategy a podium finish was surely possible. With that it’s inevitably tempting to think that the Lotus story could have ended differently.

A high-ranking finish might have provided a valuable glimpse of their potential. Like Brabham two years earlier, a once-great F1 team was nearing its demise. Although the Lotus name returned to F1 in 2010 and was the subject of a bitter row between two teams who claimed the right to use it, neither can claim to be descendants of the real Lotus.

Given that Irvine had already served a three-race ban for his role in a crash at Brazil, he must have been relieved not to receive a further penalty for his role in the first-corner crash.

He would be on the grid at the next round in Portugal, but Schumacher wouldn’t. “Of the two races where Michael’s away that’s one down, one to go,” said Hill, who now trailled the Benetton driver by 11 points with five races remaining.