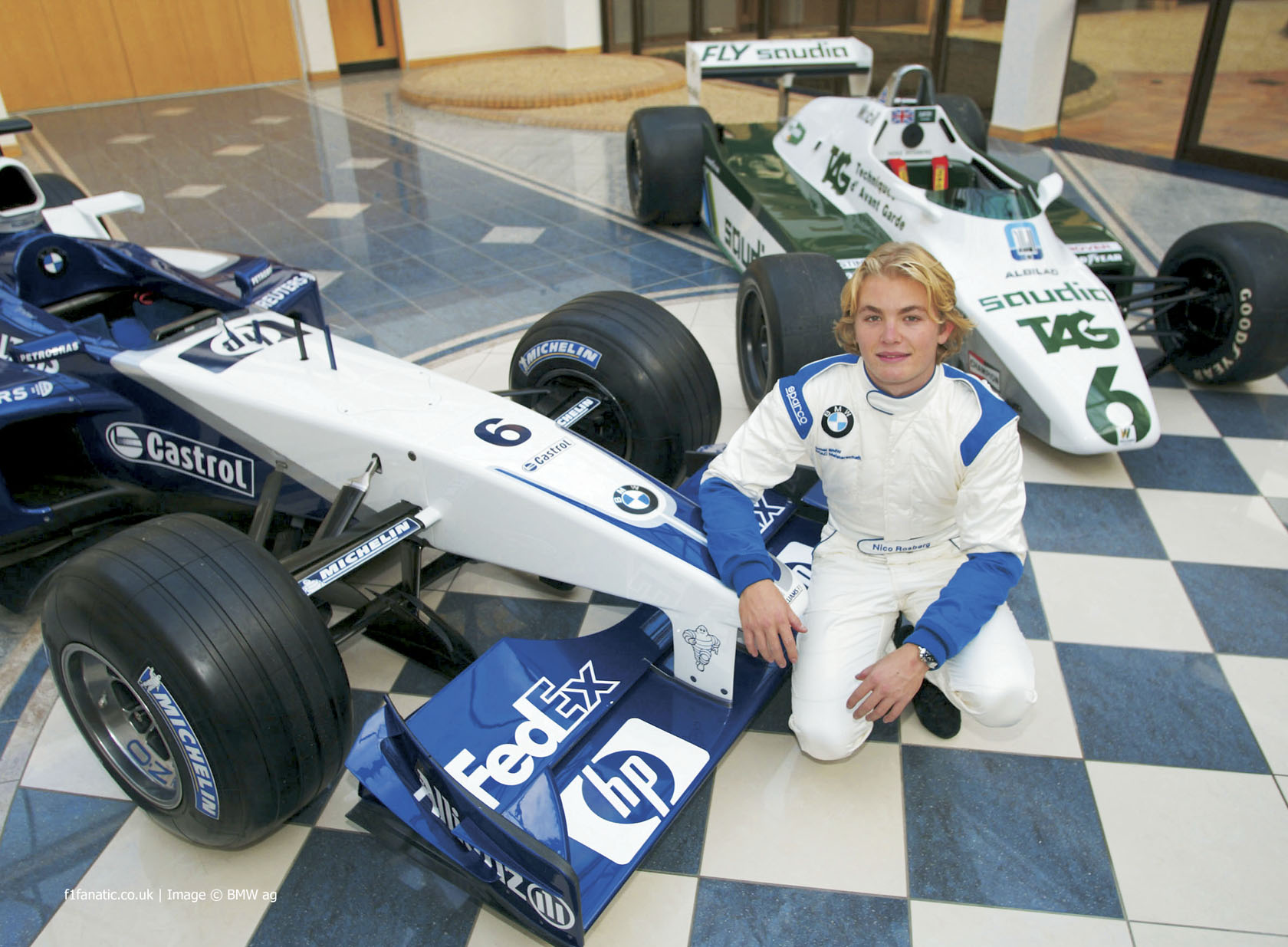 Bearing the surname of a Formula One world champion gives a racing driver a lot to live up to but it also means doors open more readily on the tricky path through the junior categories for the pinnacle of motor racing.

So it was for Nico Rosberg, who enjoyed the support of his 1982 championship-winning father Keke on his route to Formula One.

When Nico was born in 1985 his father was in the twilight years of his F1 career, allowing him to spend more time with his German wife in their Monaco home. A young Nico’s school bus passed along part of the Monte-Carlo track where he would eventually emulate his father’s 1983 win.

Rosberg worked hard at his education, learning to speak five languages fluently though, surprisingly, not Finnish. However when he began karting at the age of ten he initially raced under Finnish nationality.

Later in his career he changed his nationality for racing purposes to German for reasons that were purely practical. “Since I am a driver who does not have any big corporate sponsors behind me, it is easier to get into Formula One if you are seen to come from a big country the size of Germany,” he said in 2005. On more than one occasion in his junior career he crossed paths with his future F1 team mate Lewis Hamilton. One of their first encounters came at the 1999 European Junior ICA event, where Hamilton placed ahead of Rosberg.

For the 2000 season the pair became team mates. It began when Keke Rosberg urged Mercedes to support his son’s move up to the highly competitive Formula A karting championship. The team would be run by Dino Chiesa, who had run Rosberg’s karts for the previous two seasons and had an enviable track record of karting success.

An ambitious step up for the pair to Formula Super A the following year failed to produce results: neither won a race in their first year in the category while series veteran Vitantonio Liuzzi claimed the crown. Here are the trio racing at Mariembourg in Belgium:

In 2002 Rosberg and Hamilton’s paths temporarily diverged – for now. Rosberg embarked on a full season of Formula BMW ADAC and tasted success immediately, winning the first race of the season at the Hockenheimring: Victory in nine of the twenty races for Team VIVA on circuits such as Zandvoort, the Hockenheimring and Nurburgring saw him take a comfortable title victory by 81 points over Maximillian Gotz.

Rosberg’s success won him his first ever F1 test. And appropriately it came with the very team his father won the world championship with 20 years earlier. On December 3rd Nico he became the youngest driver to participate in an F1 test when he drove the Williams-BMW FW24 at the Circuit de Catalunya.

Formula Three beckoned for 2003 and Rosberg made the move up to the Euroseries in a team run by his father. He was beaten to rookie of the year honours by Christian Klien – who then made a hasty and unsuccessful move into Formula One the following year.

But Rosberg claimed his first F3 win on the Le Mans Bugatti Circuit and finished the season eighth overall with five podium finishes. He remained in the championship for a second season while Hamilton arrived as a rookie.

Rosberg’s season got off to a fine start with two wins in Hockenheim. However his championship bid began to go off the rails in the very next race at Estoril, when he hit stationary rival Eric Salignon at the start:

While ASM and Jamie Green cleaned up, Rosberg’s attempt to claim the runner-up spot hit trouble when he suffered this heavy crash at Zandvoort when his front left brake disc exploded:

Rosberg was unable to take part in the second race at the Dutch track, and despite having taken a third win at the Nurburgring, he ended the season fourth, one place ahead of Hamilton.

Hamilton also trailed Rosberg in the prestigious Masters of Formula Three race, the pair finishing sixth and seventh in the race won by Alexandre Premat.

At the similarly prestigious F3 season finale in Macau Rosberg crashed out while leading on the beginning of the second lap – and was immediately joined by Hamilton who had been following close behind:

While Hamilton remained in the Euroseries for a second season Rosberg took a seat in the new GP2 championship with the ART team.

Arden rival Heikki Kovalainen took the initiative early in the season. The eighth race of the year at Magny-Cours produced his third win of the season but the following day Rosberg took his first victory of the campaign:

This was a turning point for the team and Rosberg added further wins in the Silverstone and Hockenheim feature races. He left Germany six points behind Kovalainen after finishing fourth in the sprint race behind Giorgio Pantano and Scott Speed, and would have been closer had it not been for this spin while trying to pass his rivals:

ART’s rivals grew suspicious of the performance they were gaining from the supposedly identical Dallara chassis. At the Hungaroring Rosberg and team mate Premat were sent to the back of the grid when their steering columns were found not to conform with the rules. But the infringement was not thought likely to have conferred a significant advantage, and once their cars were made compliant ART remained as competitive as ever. Rosberg really hit his stride at the end of the season, with six podiums and a fifth in the final seven races.

Heading into the final two races Rosberg and Kovalainen were separated by just three point But wins in both races confirmed Rosberg as the first ever champion of GP2.

Rosberg could have made his F1 debut for Williams during 2005, when a substitute was needed after Nick Heidfeld was injured. Antonio Pizzonia got the nod instead.

But when the team came to choose their drivers for 2006 Pizzonia was passed over in favour of Rosberg. On his debut Rosberg finished seventh and became the youngest driver ever to set fastest lap – a record he still holds.

A chip off the old block? Definitely.

Browse all Route to F1 articles