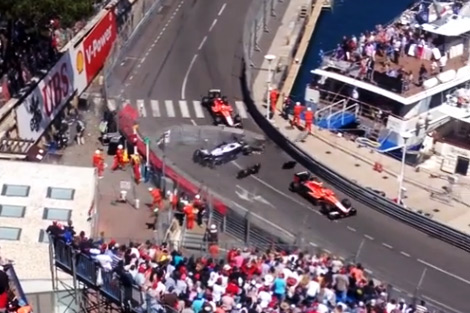 This video shot by a spectator during the Monaco Grand Prix shows how the collision between Pastor Maldonado and Max Chilton ended up blocking the track.

Chilton and Maldonado collided on lap 45 of the race, sending the Williams into the barriers at Tabac. The impact dislodged the TecPro barrier, pulling it across the circuit.

Jules Bianchi, who was following the pair of them, was unable to avoid hitting the barrier. The video shows Giedo van der Garde’s Caterham coming to a stop to avoid the wreckage.

The race was stopped and drivers had to file slowly past the scene of the accident which left only a narrow gap for them to pass through.

Maldonado was unhurt and Bianchi was able to continue in the race after having his front wing replaced. Chilton was given a drive-through penalty during the race for causing the collision.

If you were at the Monaco Grand Prix and shot any video you can share it here:

Thanks to @Andae23 for the tip.