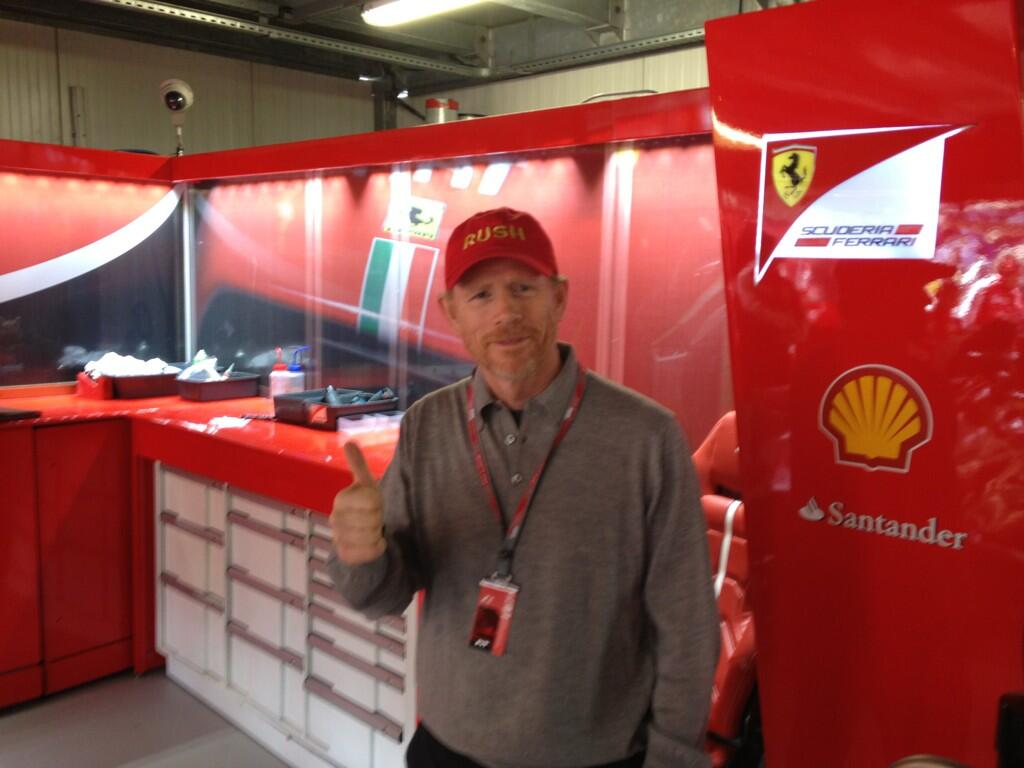 Rush director Ron Howard was a guest of Ferrari at the Monaco Grand Prix. Here’s a look at the weekend through the eyes of the teams and drivers.

Nico Rosberg came out the box firing on all cylinders and posted the fastest times in both practice sessions.

A lot of F1 folk moan about Monaco. Personally I think it’s easily the best race of the year, head and shoulders above all the others!

Here we are on the pitwall that is not on the pit wall but is in fact inside and upstairs (!). Ready for some #FP1 twitter.com/Marussia_F1Tea?ů‘ťľ?™

Even when #F1 comes to Monaco, there are still traffic jams! twitter.com/McLarenF1/stat?ů‘ťľ?™

Romain introduces the E21 to the barriers at quite a difficult corner. Just ask a certain seven-time world champ. #GetLucky #FP2

#monacoFP2 back underway after red flag to repair some Kerb damage. Adrian is first man to head back out. twitter.com/clubforce/stat?ů‘ťľ?™

Bit of a mess on Webber’s front wing and suspension. Looks like he might have depleted the local bird population. #F1

Monaco’s traditional Friday ‘day off’ saw the drivers and teams enjoying the atmosphere and fulfilling their many media obligations.

After the autograph session, it’s time for our crew to step in. Pit stop practice on the programme! #FeelTheForce twitter.com/clubforce/stat?ů‘ťľ?™

“Yeah, my other car is a Ferrari 250GT California Spyder. No seriously, it is…” @achrisevans twitter.com/redbullf1spy/s?ů‘ťľ?™

Here’s where they keep the Safety Cars (yes, 2 of them). A common Monaco occurrence! #FeelTheForce twitter.com/clubforce/stat?ů‘ťľ?™

SATURDAY – It was Mercedes all the way in qualifying, despite rain adding a touch of spice to Q1 and Q2. Felipe Massa started last after a crash in FP3 left him stranded in the pits, while Giedo Van Der Garde bagged his highest grid slot for Caterham and Jenson Button broke down in Q3.

Walking to work ON the racetrack itself is always cool! #monacobaby twitter.com/McLarenF1/stat?ů‘ťľ?™

A little bit of rear left tyre cheekiness means the barrier gives @rgrosjean a slap. Back to your bo?‚?ęte Monsieur twitter.com/Lotus_F1Team/s?ů‘ťľ?™

Monaco hotel breakfast is funny.Some people anticipating a new great day of m/sport, others noisily soaking up alcohol before heading to bed

Raikkonen: “Why do I have a red light on my steering, in the middle?” “It’s the FIA lock-out, it will clear in a few seconds… OK now.” #F1

Oof… and another one in the wall. This time it’s SUT’s Force India at the top of the hill. Double waved yellows.

“Something broke on the car, it’s not possible” exclaimed a frustrated Grosjean. #F1

Raining here in Monaco….will be an interesting quali!!!

Problems for Jules who has stopped out on track. We’re looking into it but really concentrating our efforts on Max now

“I got completley blocked by the Toro Rosso” complains Grosjean. He’s told he’s out: “No way, no way, this is unbelievable”. #F1

“OK Sebastian you’re P3. Only a tenth away from pole mate.” “Ah, it’s close. I think it was there. A tenth was there definitely. Sorry boys”

The French paparazzi here in Monaco are some of the worst human beings on this planet. Utterly vile people.

Sometimes sport is cruel, massive misjudgment in Qualy when it mattered. We will keep up the fight for tomorrow, will be a busy one! #headup

It may have been straightforward for Rosberg, but behind him carnage reigned. The Monaco Grand Prix was red-flagged after Pastor Maldonado’s heavy crash at Tabac.

He wasn’t the only one in trouble: Felipe Massa repeated his practice crash and Grosjean raised his weekend shunt total to four.

Rosberg told he had 60% remaining in his rears, 50% in his fronts, in the last stint. Better than Red Bull it seems. #F1

A lot of damage on PM car

Hit his knee and a cut on his hand

Ready and waiting to get back out there… #MonacoGP twitter.com/McLarenF1/stat?ů‘ťľ?™

Hmmm… Wonder what Romain’s damage bill for this weekend is ?

Rocquelin tells Vettel to back off. “But satisfaction instead of going slow for 77 laps” says Vettel. #F1

Shame for the result in the end!!but there was nothing I cut do to avoid contact with kimi .. Will keep it up and look forward for Montreal!

Now avoiding accidents can be a bad thing..;))! GP without pace. In Canada, we will come back to our best level! Very important points today

Share any other great Tweets you spotted during the Monaco Grand Prix in the comments.