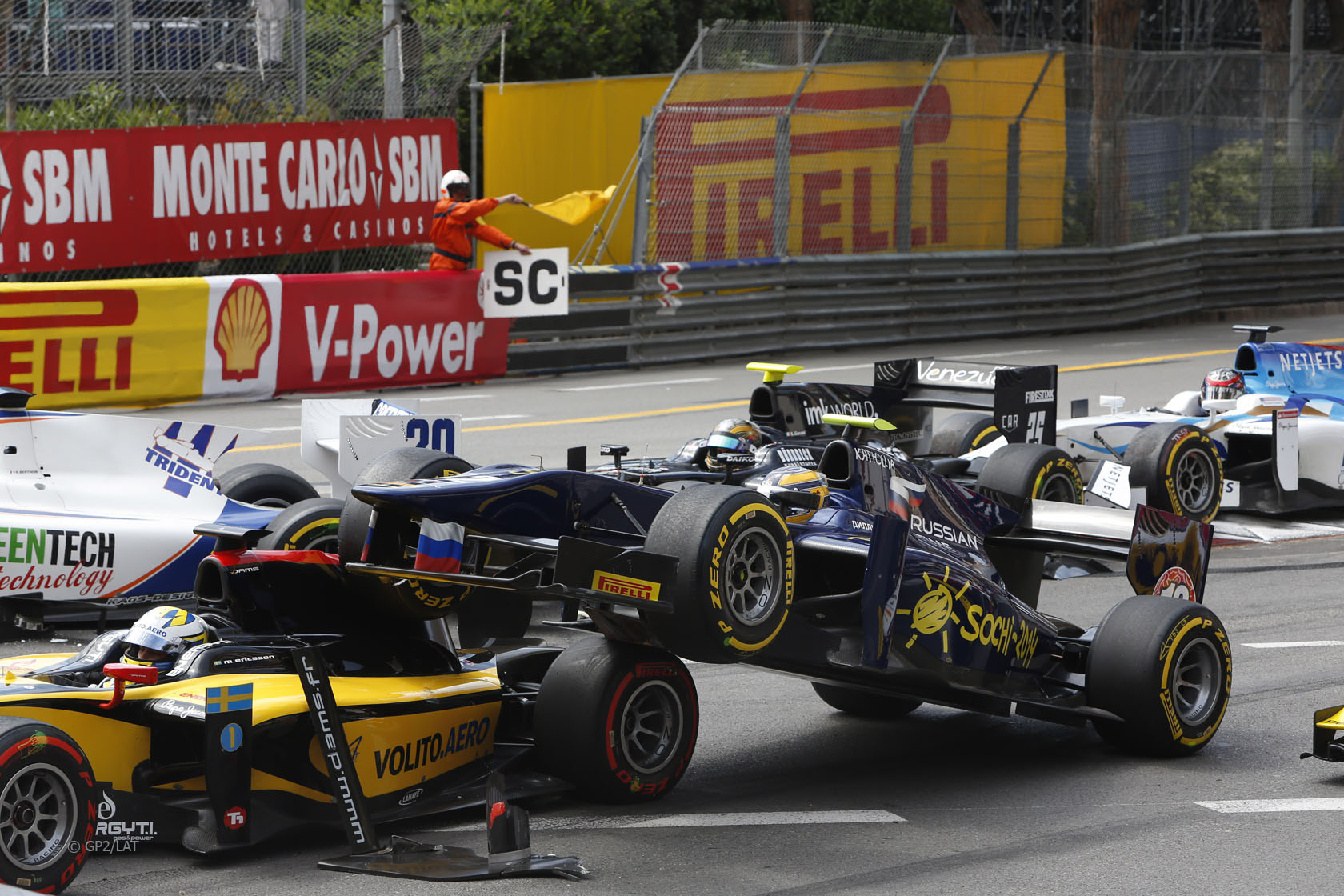 Sam Bird and Stefano Coletti shared the plaudits with a win apiece in the GP2 races on the streets of Monaco. But Johnny Cecotto Jnr’s driving provided the major talking point of the weekend.

A consummate performance in qualifying bagged Cecotto pole position at the track for the second year running. However there was to be no repeat of his 2012 win.

Cecotto was beaten off the line by team mate Mitch Evans, then braked too late for the first corner and speared into barrier. A chain-reaction of crashes around him blocked the track, forcing the stewards to stop the race.

This was a less egregious error than some of those Cecotto has committed this year – notably his outrageous move on Bird during qualifying in Malaysia. But the stewards felt compelled to take action, and ordered him to to take no further part in the weekend. The 14 car pile-up at the first corner was not entirely Cecotto’s fault. But with more than half the filed parked at Sainte Devote the stewards has little alternative to stopping the race.

While Cecotto undoubtedly played a major role in provoking the carnage, others were also at fault. Kevin Ceccon missed his braking point and smashed into Bird’s rear wing. However the Russian Time driver was able to limp back to the grid where the wing was replaced as the drivers awaiting the restart.

Julian Leal also contributed to the melee, turning Jolyon Palmer around. Marcus Ericsson ran wide and found his path blocked by the Cecotto and Fabio Leimer collision. Tom Dillmann was helped to avoid running into the back of Ericsson. Daniel Abt and Rene Binder also got caught up, the latter losing his front wing.

The Leal-Palmer collision causing another domino effect, claiming Robin Frijns, Alexander Rossi, Coletti, Kevin Giovesi and both Addax drivers. Several of them returned to their cars during the delay in an effort to have the marshals restart them, to no avail. The race restarted behind the safety car, with Evans leading Bird. But the Russian Time was clearly capable of going much quicker on his soft tyres than Evans was on his super softs, almost tripping over the Arden driver in his attempt to get past.

Evans eventually pitted on lap 13, releasing Bird who immediately set a string of fastest laps. By the time Bird made his pit stop there was no longer any threat to him from behind. He comfortably resumed in the lead followed by Ceccon, who had jumped Evans in the pits as the Arden crew changed all four tyres.

Up front Sam Bird claimed an emphatic win by over 20 seconds from Ceccon. Evans bagged his second GP2 podium in third. Coletti got a fantastic start from third as he easily disposed of second placed Binder to follow Quaife-Hobbs up the hill for the first time.

Evans was another to make a good start as he pulled a fantastic move on Calado at Portier to take third. Felipe Nasr soon demoted the British driver another place as Calado cut a corner while attempting to defend a move from Nasr, forcing him to give the place up.

Up front, Coletti was determined to make gains early on as he pulled a fantastic move on Quaife-Hobbs into the Nouvelle Chicane to take a lead he never lost.

Trains form as tyres drop off

Rain clouds hovered throughout the race but never amounted to anything and tyres once again ended up dictating the end of the race.

Binder, Sergio Canamasas and Jon Lancaster suffered the most with degradation and all ended up with queues behind them. The two British drivers suffered a precipitous loss in pace, causing each surrendering several places.

Coletti was untroubled, periodically backing off to save his tyres, and scored a rare home victory for a Monaco driver. Quaife-Hobbs scored his first podium with second and Evans made it two in a row for the weekend.

Coletti added yet another sprint race win to his collection while Nasr continued his run of top four places to stay within range of his Rapax rival. Bird moves into third place with his win.

14 comments on “Bird and Coletti take wins amid Monaco carnage”