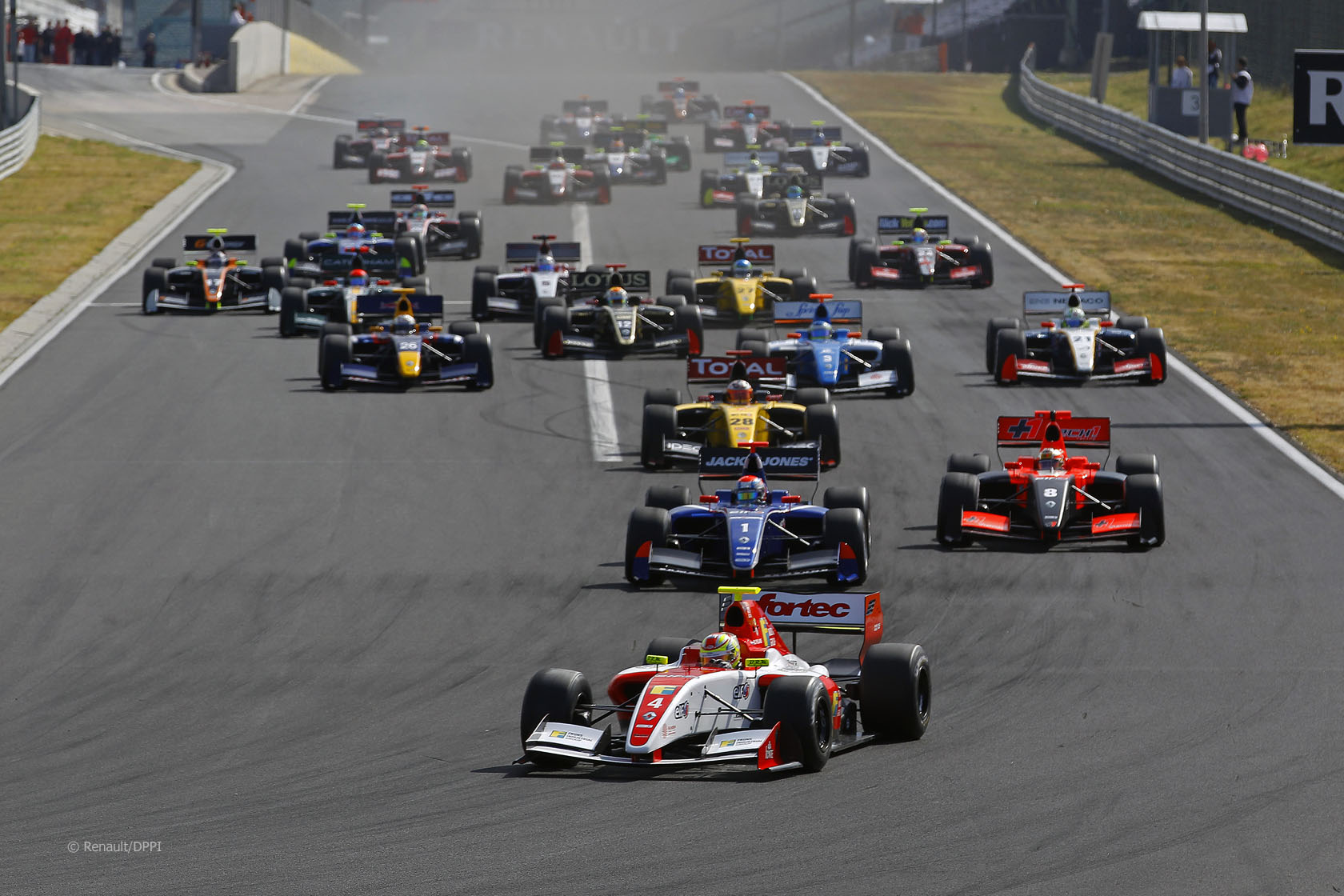 For Jules Bianchi, Robin Frijns and Sam Bird this weekend’s World Series by Renault double-header at the Circuit de Catalunya will be decisive. Tech 1 driver Jules Bianchi comes into the weekend with a slender points advantage following a superb drive in changeable conditions at Paul Ricard.

For the Force India reserve driver 2012 has been a make-or-break year, and for many anything less than the title would spell failure.

Though not spectacular Bianchi has got steadily faster over the course of the season and has been racking up the results. Wet weather forecast for this weekend?é??s races this could aid Bianchi’s challenge.

“The championship is really important and I need to show people that I am ready for F1,” says Bianchi. “You have to be competitive, you have to be consistent and to do things people don’t expect you to do – this makes a fantastic racer.” Fortec’s Robin Frijns has been the star of the season. He’s made the leap from the 2.0L Eurocup look easy and could be about to score championship victories on the World Series by Renault circus in successive seasons.

Unlike so many young drivers Frijns is not signed to a development scheme but has instead made his own career.

In many respects Frijns doesn’t need to claim the title this weekend as he has shown enough this season that anything less than an F1 race seat next year would be a travesty.

“He beats himself up if he doesn’t win,” says Fortec boss Richard Dutton. “He’s incredibly competitive he pushes all the time and he’s always looking for a bit extra. He’s not happy unless he’s on pole and and he’s never happy unless he wins.”

Frijns says he’s “just a rookie I do the best I can. I do my best and work with the team very hard and make the best of it” Sam Bird has an outside shot at the title but will need to rely on the misfortune of others, and a major upturn in form. The glory of the Monaco victory seems a long time ago now and Bird really needs to deliver this week to maintain career momentum.

A criticism throughout his career has been that Bird can over-think his racing. A poor weekend in Moscow before the summer break seems to have derailed his season. However on his day he is arguably quickest driver in the field. This weekend needs to be his day.

Sam Bird: “I love my job and I’m dedicated to what I do,” says Bird. “I’ve wanted it for so long. I’ve had to fight for my position – there’s been ups and down but I have bounce-back-ability and we’re still standing so why not me?”

Two-litre title up for grabs too

The 2.0L Eurocup is just as keenly fought as its bigger brother and this too will go down to the wire.

Stoffel Vandoorne holds a slender advantage over Daniil Kvyat and provided the Belgian maintains his consistent form from the year to date he should claim the spoils. That said Kvyat has been devastatingly quick and double win for him would guarantee the title.

Throughout the year ESPN has been providing full coverage of both championships and are pulling out all the stops for the final weekend of action.

Both 3.5L races will have full coverage, with race one being shown at 3pm on Saturday. And the regular Wednesday shows over the next fortnight will capture every twist and turn in the 3.5L fight.

Who do you think will win the Formula Renault 3.5 title this weekend? Cast your vote below and have your say in the comments.

Who will win the Formula Renault 3.5 title? An F1 Fanatic account is required in order to vote. If you do not have one, register an account here or read more about registering here.

Why you should watch…