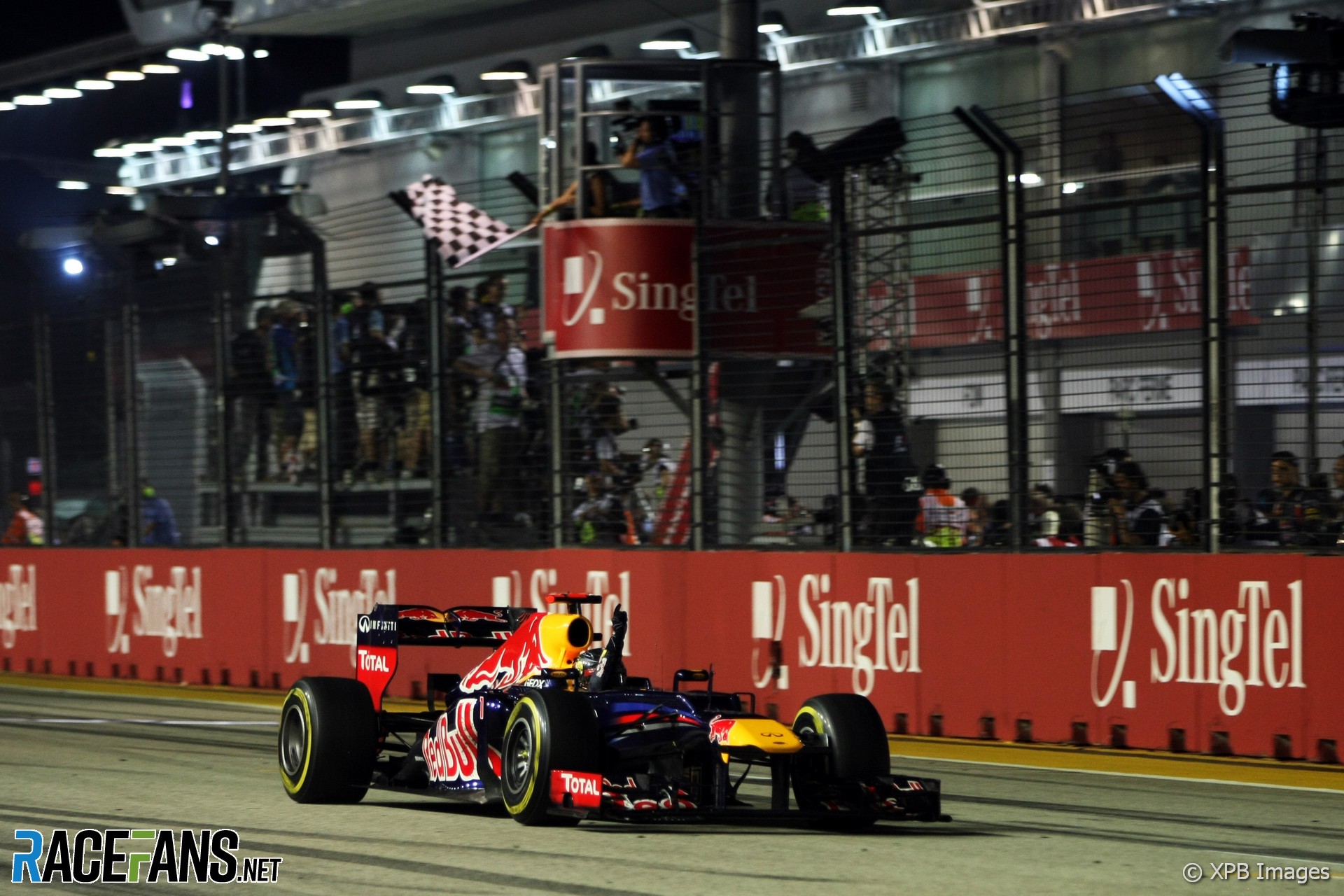 Sebastian Vettel won the Singapore Grand Prix for a second year running after a gruelling race which ran to the two-hour time limit.

The race fell into Vettel’s hands after Lewis Hamilton retired from the lead before half-distance with a gearbox problem.

Jenson Button salvaged second place for McLaren while Fernando Alonso achieved his pre-race target of finishing on the podium to limit the damage done to his championship lead.

Hamilton held onto his lead at the start but Pastor Maldonado lost his grip on second place. He went slightly too deep at turn one and Vettel pounced, claiming the place from him. Button followed him past.

Alonso made an unusually poor getaway and was beaten off the line by Paul di Resta. But the Ferrari driver got back down the inside at turn five to take fifth place back.

Behind them several drivers went across the run-off at turn one, but the stewards decided all had returned to the track without gaining an unfair advantage.

The opening laps were a cagey affair, the front-runners not wanting to take too much life out of the super-soft tyres which they had already qualified on.

Webber was the first to pit on lap nine. The next time around Vettel lost half a second in the middle sector and he also dived into the pits.

Alonso came in next and two laps after that Hamilton pitted from the lead. He emerged ahead of Raikkonen, who was yet to stop, and who was easily passed by Vettel in the DRS zone.

Button eked his tyres out a little longer, pitting on lap 15, and returned to the track behind Vettel.

Some of the early stoppers found themselves having to pick their way past those who were yet to come in. Maldonado had a dramatic moment, catching a slide as he went past Hulkenberg with his DRS open. Alonso also took the Force India.

Moments later Maldonado and Alonso gained another place without having to do any overtaking. Hamilton had been on the radio to complain about problems with the upshift on his McLaren and on lap 23 it stopped changing gears entirely.

He repeatedly pulled on his right-hand gear lever then thumped the steering wheel in frustration as he coasted to a stop in the turn five run-off. In five races he’s had two wins and three no-scores, the latter down to a puncture, a first-lap collision, and now a gearbox problem.

“He was looking after things and keeping it in control,” said a disappointed Martin Whitmarsh afterwards, who added that the problem had only become apparent during the race.

He discounted the possibility of the problem having been caused by Hamilton’s contact with the wall during qualifying: “Lewis brushed the wall but it was very light. So I don’t think it’s something that came from that.”

Vettel now took up the lead with Button close behind and Maldonado eyeing a shot at a podium finish. But the Williams driver had to withstand some serious pressure from Alonso.

They made their second pit stops together and returned to the track in the same order. Once more the pair found themselves in traffic, forming a queue headed by Nico Rosberg and Romain Grosjean.

As Maldonado explored the rear of Grosjean’s Lotus, Alonso resisted the temptation to unload his KERS in the DRS zone. He emptied it as they came out of turn 13 instead and got alongside the Williams on the outside of the following corner.

Maldonado defended his position firmly and Alonso, reluctant to risk too much with a championship at stake, wisely gave best to the Williams.

In a near-repeat of last year’s Grand Prix, a safety car intervention at around half-distance changed the complexion of the race. Narain Karthikeyan, struggling with his HRT’s brakes, hit the wall at turn 18.

Vettel and Button were into the pits immediately to make their second and final pit stops. A string of other cars took the opportunity to pit including Raikkonen, Di Resta, Rosberg, Grosjean and Maldonado.

The latter sacrificed his third place to switch to soft tyres to ensure he reached the end of the race without a further stop. But it all became academic moments later as the team told him his hydraulics had failed and he had to retire.

The first safety car period dragged on as three cars were sent around to unlap themselves. And the restart didn’t last very long – Michael Schumacher ploughed into the back of Jean-Eric Vergne at turn 14, putting both out.

Button had a near-miss at the end of the first safety car period as he nearly ran into the back of Vettel. He was quickly on the radio to complain about Vettel’s driving and the stewards will investigate the incident after the race.

The second restart went smoothly – Vettel pulled clear of Button and Alonso, the Ferrari driver now up to third. Di Resta appeared behind him in fourth and was briefly able to use DRS to attack the Ferrari, only to drop back.

Grosjean was running in sixth in front of Raikkonen, but was instructed by his team to let his team mate by and duly surrendered the position. Raikkonen was unable to do anything about Rosberg ahead and complained afterwards that the race had been “boring”, adding: “you cannot overtake”.

Neither of those was true about the action behind him, as the drivers who had pitted under the safety car used their fresher tyres to attack.

Felipe Massa, who dropped back early on with a puncture, had a dramatic moment as he tried to squeeze past Bruno Senna on the approach to turn 13. The pair made contact and massa’s car briefly got away from him, but he gathered it up and made it into the corner, claiming the place.

Also in the wars was Nico Hulkenberg, who managed to make contact with both Sauber drivers, starting with Sergio Perez. Then, as Mark Webber passed Kamui Kobayashi, Hulkenberg clipped the other Sauber, breaking Kobayashi’s front wing and picking up a puncture himself.

Webber went on to pass Senna and spent the final laps trying to find a way past fellow Australia and Red Bull employee Daniel Ricciardo – the Toro Rosso driver holding him off until the flag.

The spate of midfield collisions played into the hands of Marussia’s Timo Glock, elevating him to 13th place. That became 12th when Senna retired in the dying moments of the race, and the crucial extra position moves Marussia back into tenth in the constructors’ championship, ahead of Caterham.

Senna’s engineer was quick to warn him of the potential danger from his car: “Jump out of the car,” he said. “It could be a KERS problem. Do not touch the ground at the same time. The car is unsafe.”

The lengthy safety car interruptions meant there was only time for 59 of the scheduled 61 laps before the two-hour time limit expired. Vettel was never seriously threatened by Button in the closing stages and his car didn’t let him down as he finally clinched his second win of the year.

On his slowing-down lap he dedicated the win to Professor Sid Watkins, who died last week and in whose honour a minute of silence was observed before the race started.

Button claimed second ahead of Alonso, who made good on his pre-race aims of finishing on the podium and taking points off the driver who had been closest to him in the championship: Hamilton. But Vettel has cut his points lead to 29 points with six races remaining.

100 comments on “Vettel wins in Singapore as Hamilton drops out”